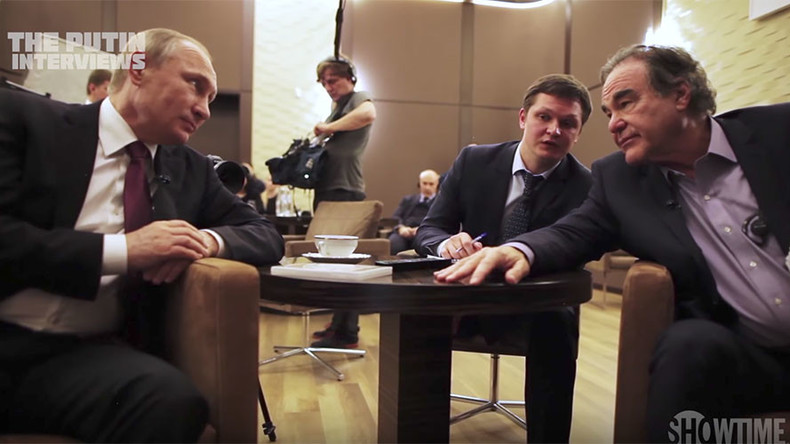 Russian President Vladimir Putin has accused the U.S. of supporting the most violent insurgency in post-Soviet Russia, during an interview with American director Oliver Stone.

The pair spoke about a breadth of topics in conversations that make up Stone’s four-hour film, The Putin Interviews . The series took place in a variety of settings, from opulent reception halls and bucolic residences to the inside of Putin’s car, with the leader in the driver’s seat.

During one of their sit-down exchanges, broadcast on Showtime, Putin gave credence to a claim about the wars in Russia’s Chechnya region often made by the more fringe elements among the Russian establishment, that the U.S. directly supported “terrorist” rebels.

Putin said the Kremlin hoped for U.S. support in quelling a separatist movement in the Russian republic, but had observed “instead, U.S. special services supporting the terrorists.”

The Chechen Wars took place in 1994, when secular Chechen militants declared independence from Russia, and 2009, when, after two bloody military operations, Russia announced it had quelled the insurgency that had morphed into a radical Islamist force.

Putin did not say at which point he thought the West had backed the “terrorists.” However, he seemed to endorse a theory frequently espoused by the current Chechen regional leader, who switched allegiances during the conflict to join Moscow’s ranks, that the U.S. was enmeshed in the conflict.

“If we are talking about political support, this does not need proving,” Putin said, referring to the negative reaction internationally to Russia’s use of force in the tiny region. “This was done publicly, openly. And as far as operational and financial support is concerned—we have such evidence and above all some of it we have already submitted to our American colleagues.”

Fighting the Chechen insurgency was instrumental in Putin’s rise to the presidency—he became prime minister in 1999, before being elected president on the promise of taking a hard line on Chechen separatists. His stance on the issue won him popularity after a series of controversial bombings in Moscow and elsewhere attributed to Chechen groups.

“In my view, the important thing is that upon us fell the absolutely lasting opinion that our American partners speak about supporting Russia in words, they speak about their preparedness to cooperate, including in fighting terrorism, but in deeds they use these terrorists to unsettle the internal political situation in Russia,” Putin told Stone.

Putin made similar claims in a state-TV documentary dedicated to his 15-year anniversary in power, two years ago. Much of Stone’s documentary consisted of Putin reiterating claims unfavorable to the U.S., the West and Ukraine, messages that frequently have an outlet in the Russian state-dominated media establishment.