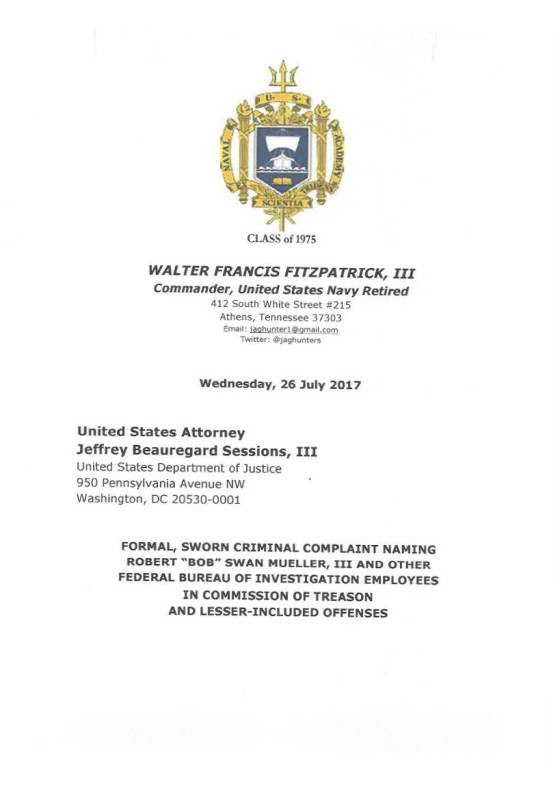 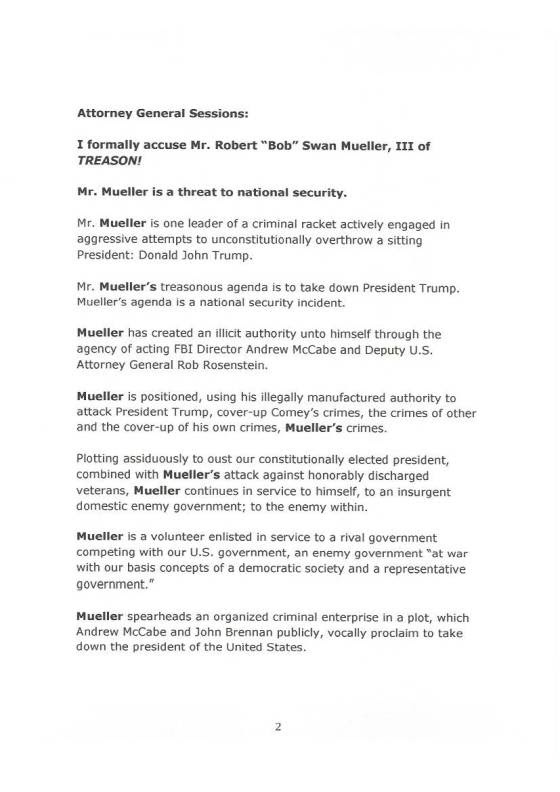 The complaint accuses Mueller “and other Federal Bureau of Investigation employees in commission of treason and lesser-included offenses” intended to allegedly remove President Donald Trump from office.

The 16-page document recounts that Mueller was FBI director during an event Fitzpatrick calls “The Madisonville Hoax,” when he and other military veterans, along with some civilians who had traveled to witness a court hearing for Fitzpatrick on April 20, 2010 in the tiny East Tennessee town, were depicted as members of a “militia” which planned to “take over the courthouse” and arrest members of law-enforcement and the judiciary.

There was no such plot, nor was anyone attending the hearing in Madisonville bearing arms. In preparation for the hearing, however, the streets and surrounding roads were swarming with local, state and federal law-enforcement officers, including the FBI.

No one was approached by law enforcement or arrested that day, although schools were closed and snipers positioned on the roof of the Monroe County courthouse.

One of the attendees, Navy veteran Darren Wesley Huff, was nevertheless arrested ten days later. As a result, Huff faced trial on two federal firearms charges. He was acquitted on the first charge with a hung jury on the other, after which U.S. District Court Judge Thomas Varlan instructed the jury to reconvene and reach a different verdict on the second charge.

The jury then convicted Huff on the second charge of transporting firearms across state lines to commit a “civil disturbance,” even though Huff’s firearms had been locked in his truck’s toolbox before he reached Madisonville that morning. Along with many others, he was barred from entering the courthouse and therefore posed no threat to anyone inside, contrary to the sworn affidavit of FBI Special Agent Mark Van Balen.

Huff spent four years in federal prison without having committed a crime.

The mainstream press misrepresented that a number of observers in Madisonville that day were seen carrying guns despite law enforcement’s inability to identify those individuals and that no arrests were made.

Photos of Fitzpatrick and Huff shortly thereafter appeared in a Tennessee law-enforcement training program with the pejorative of “sovereign citizen,” indicating that they are “domestic terrorists.”

The U.S. Justice Department refused to release any documentation in its possession on “The Madisonville Hoax” to this publication despite several levels of appeal having been exhausted.

On page 3, Fitzpatrick informed Sessions that he accused Barack Hussein Obama II of treason for the first time on March 17, 2009, alleging that Obama is a “foreign born domestic enemy.”

Recalling an Obama-era program coordinated by the Department of Homeland Security (DHS), FBI, and Department of Defense (DOD), Fitzpatrick told Sessions that Mueller “worked closely with ‘resident’ Obama and Eric Holder in the planning of their criminal plot codenamed: OPERATION VIGILANT EAGLE. Obama, Holder and Mueller focused on military veterans as the direct object of their masquerade (p. 6):

On July 18, Fitzpatrick went to the McMinn County, TN courthouse to address the grand jury about the “sovereign citizen/domestic terrorist” label which continues to be attached to his name.

At the bottom of page 6, Fitzpatrick recounted his initial treason complaint against Obama, accusing Mueller of having “aided and abetted Barack Hussein Obama’s TREASON protecting Obama’s identity as a foreign born domestic enemy, standing guard over Obama’s sealed papers and past…” in an apparent reference to the dearth of paper documentation released by the Obama White House about its eight-year occupant.

The Justice Department has since prosecuted Arpaio on a charge of criminal contempt of court, with a decision from U.S. District Court Judge Susan Bolton pending following an eight-day trial which ended early this month. Many believe that the decision to prosecute Arpaio for allegedly purposely violating a federal judge’s order relating to Arpaio’s immigration patrols was launched in retaliation for Arpaio’s having sanctioned the investigation into Obama’s purported birth certificate.

The media has maintained a virtual blackout on the findings of forgery in the birth certificate image and Obama’s purported Selective Service registration form.

Fitzpatrick stressed in the complaint that Mueller prevented any investigation into Obama’s identity (p. 7) while serving as FBI Director:

Fitzpatrick suggested to Sessions that he could terminate Mueller’s role as “Special Counsel” very rapidly.

Speculation has recently abounded as to whether or not Trump will retain Sessions in his position given that Trump has expressed “disappointment” in Sessions’s having recused himself from the “Russia” investigations which Mueller is reportedly pursuing.

On Wednesday, Trump tweeted that Sessions has been “very weak” on investigating Trump’s former Democrat rival, Hillary Clinton, for having destroyed 33,000 emails when she worked as Obama’s Secretary of State and utilized a private, unauthorized server over which she sent classified information.

Trump and his campaign aides have been accused of “colluding” with “the Russians” to assure Trump would win the presidency last year. Trump and his associates have denied any wrongdoing and have begun to meet with congressional investigators behind closed doors, after which public testimony may follow.