BURNING MAN: Only the photos can tell the story 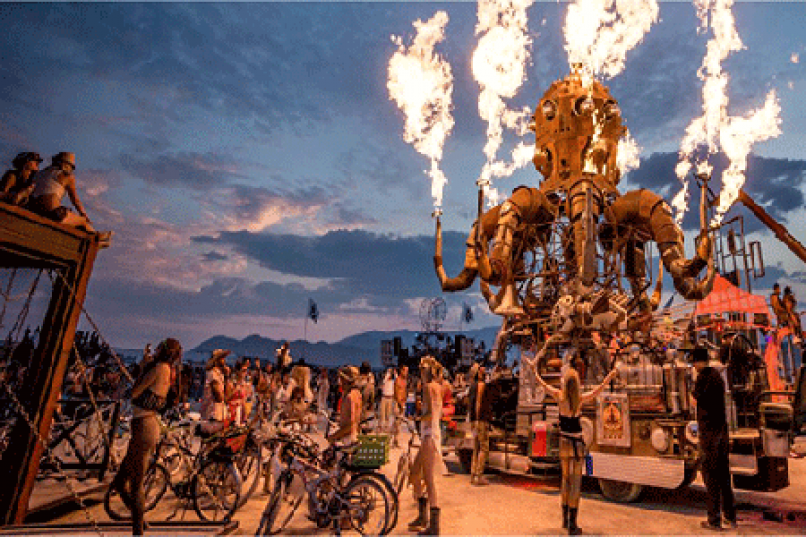 BURNING MAN:  Only the photos can tell the story

By Sam Webb
The Sun

Burning Man Festival is one of the world’s biggest and most popular festivals and takes place once a year in the Black Rock Desert in Nevada.

PARTY-GOERS have descended on the deserts of Nevada for Burning Man – one of the world’s biggest and most extreme festivals.

The yearly Burning Man festival sees tens of thousands of people gather for at least a week of mayhem and mutiny on a scale that puts makes Glastonbury look tame.

Revellers from all walks of life — from surreal artists and far-out families to high-flying CEOs and tech titans – head to the sands for a party like no other.

Last year’s festival hosted over 70,000 “burners” including 3,000 rich enough to fly in to its unregulated Black Rock City Airport.

And in the past there’s been a tent for mass lesbian romps, a human petting zoo and first-timers get hugged by a stark naked welcoming committee.

The event began Sunday and continues through the weekend about 100 miles (161 kilometers) north of Reno.

The Burning Man Festival was first held by Larry Harvey and his group of friends in 1986.

They named the event Burning Man because it began as a bonfire ritual on the summer solstice on Baker Beach in San Francisco.

Since then, the gathering has been organised by the Burning Man Project and has become an annual event which this year was attended by over 70,000 “burners”.

And for many, it marks the end of summer, the festival is rounded off by living up to its title – with the burning of a giant wooden man-shaped construct.

But anyone wanting to spark up a joint at the party should think twice – even though Nevada has legalised recreational marijuana.

“The broader public including those that go to Burning Man seem to think that at Burning Man, anything goes,” said Rebecca Gasca, CEO of the Reno-based cannabis consulting firm Pistil and Stigma.

Voters in the state passed a marijuana legalisation measure in 2016, and sales began at retail stores on July 1.

But consumption is allowed only in private and even possession remains illegal on federal lands, including the stretch of Black Rock Desert managed by the US Bureau of Land Management where the counter-culture festival is.

“You’re not exempt from the law at Burning Man, and that is doubly true this year,” festival spokeswoman Megan Miller told the Reno Gazette-Journal.

BLM officials say a pot possession arrest can result in a year in jail and a $1,000 fine.

But federal agents made no arrests for any crimes last year at Burning Man, or the year before.