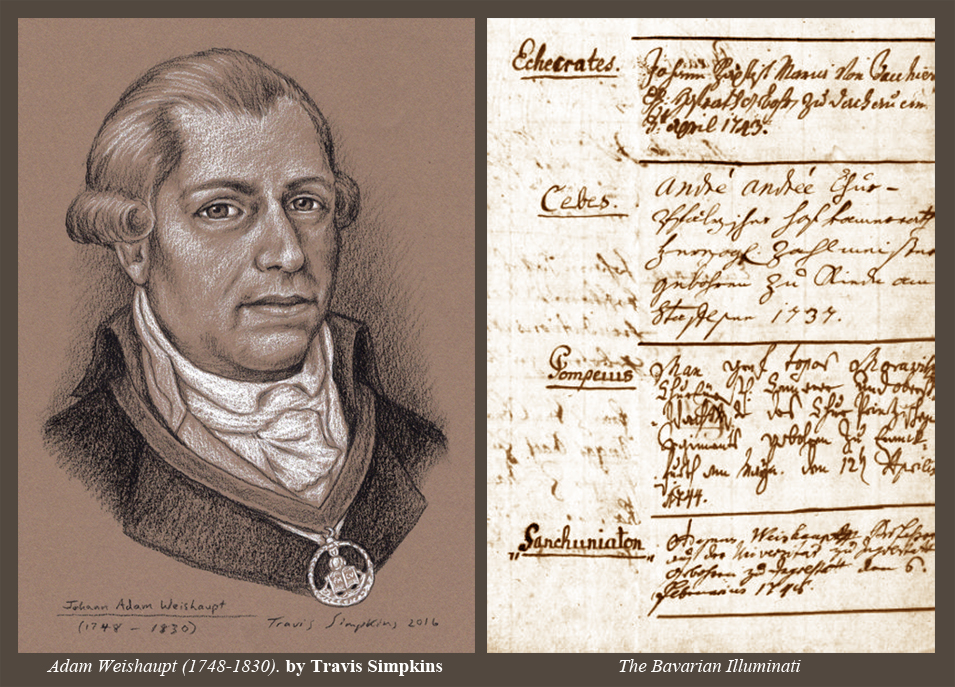 “The secret society known as the Order of the Illuminati was founded in the city of Ingolstadt in the southern German monarchy of Bavaria on May 1, 1776 by Adam Weishaupt, a 28-year-old professor of religious law. Beginning with only five members, Weishaupt’s order grew slowly, numbering about 60 in five cities by 1780. The professor deliberately blended mysticism into the workings of the brotherhood in order to make his agenda of republicanism appear to be more mysterious than a political reform group. He joined the Masons in Munich in 1777 and adopted many of their classes and orders and promised his initiates that they would receive a special communication of occult knowledge as they advanced higher in the ranks of the Illuminati.”
(Source:  The Illuminati)

A secret society, founded on May 1, 1776, by Adam Weishaupt, who was Professor of Canon Law at the University of Ingolstadt. Its founder at first called it the Order of the Perfectibilists; but he subsequently gave it the name by which it is now universally known. Its professed object was, by the mutual assistance of its members, to attain the highest possible degree of morality and virtue, and to lay the foundation for the reformation of the world by the association of good men to oppose the progress of moral evil.

To give to the Order a higher influence, Weishaupt connected it with the Masonic Institution, after whose system of Degrees, of esoteric instruction, and of secret modes of recognition, it was organized. It has thus become confounded by superficial writers with Freemasonry, although it never could be considered as properly a Masonic Rite. Weishaupt, though a reformer in religion and a liberal in politics, had originally been a Jesuit; and he employed, therefore, in the construction of his association, the shrewdness and subtlety which distinguished the disciples of Loyola; and having been initiated in 1777 in a Lodge at Munich, he also borrowed for its use the mystical organization which was peculiar to Freemasonry. In this latter task he was greatly assisted by the Baron Von Knigge, a zealous and well-instructed Freemason, who joined the Illuminati in 1780, and soon became a leader, dividing with Weishaupt the control and direction of the Order.

In its internal organization the Order of Illuminati was divided into three great classes, namely,

I. Nursery. After a ceremony of preparation it began:

The first three Degrees were communicated without any exact respect to the divisions. and then the candidate proceeded:

This class was subdivided into the Lesser and the Greater Mysteries.

The Lesser Mysteries were:

The Greater Mysteries were:

Anyone otherwise qualified could be received into the Degree of Novice at the age of eighteen; and after a probation of not less than a year he was admitted to the Second and Third Degrees, and so on to the advanced Degrees; though but few reached the Ninth and Tenth Degrees, in which the inmost secret designs of the Order were contained, and, in fact, it is said that these last Degrees were never thoroughly worked up. The Illuminati selected for themselves Order Names, which were always of a classical character. Thus, Weishaupt called himself Spartocus, Knigge was Philo, and Zwack, another leader, was known as Cato. They gave also fictitious names to countries. Ingolstadt, where the Order originated, was called Eleusis; Austria was Egypt, in reference to the Egyptian darkness of that kingdom, which excluded all Freemasonry from its territories; Munich was called Athens, and Vienna was Rome. The Order had also its calendar, and the months were designated by peculiar names; as, Dimeh for January, and Bemeh for February. They had also a cipher, in which the official correspondence of the members was conducted. The character now so much used by Freemasons to represent a Lodge, was invented and first used by the Illuminati.

The Order was at first very popular and enrolled no less than two thousand names upon its registers, among whom were some of the most distinguished men of Germany. It extended rapidly into other countries, and its Lodges were to be found in France, Belgium, Holland, Denmark, Sweden, Poland, Hungary, and Italy. The original design of Illuminism was undoubtedly the elevation of the human race. Knigge, who was one of its most prominent working members, and the author of several of its Degrees, was a religious man, and would never have united with it had its object been, as has been charged, to abolish Christianity. But it cannot be denied, that in process of time abuses had crept into the Institution and that by the influence of unworthy men the system became corrupted; yet the coarse accusations of such writers as Barruel and Robison are known to be exaggerated, and some of them altogether false.

The Conversations-Lexicon, for instance, declares that the s society had no influence whatever on the French Revolution, which is charged upon it by these as well as other writers. But Illuminism came directly and professedly in conflict with the Jesuits and with the Roman Church, whose tendencies were to repress the freedom of thought. The priests became, therefore, its active enemies, and waged war so successfully against it, that on June 22, 1784, the Elector of Bavaria issued an Edict for its suppression. Many of its members were fined or imprisoned, and some, among whom was Weishaupt, were compelled to flee the country. The Edicts of the Elector of Bavaria were repeated in March and August, 1785, and the Order began to decline, so that by the end of the eighteenth century it had ceased to exist. Adopting Freemasonry only as a means for its own more successful propagation, and using it only as incidental to its own organization, it exercised while in prosperity no favorable influence on the Masonic Institution, nor any unfavorable effect on it by its dissolution.