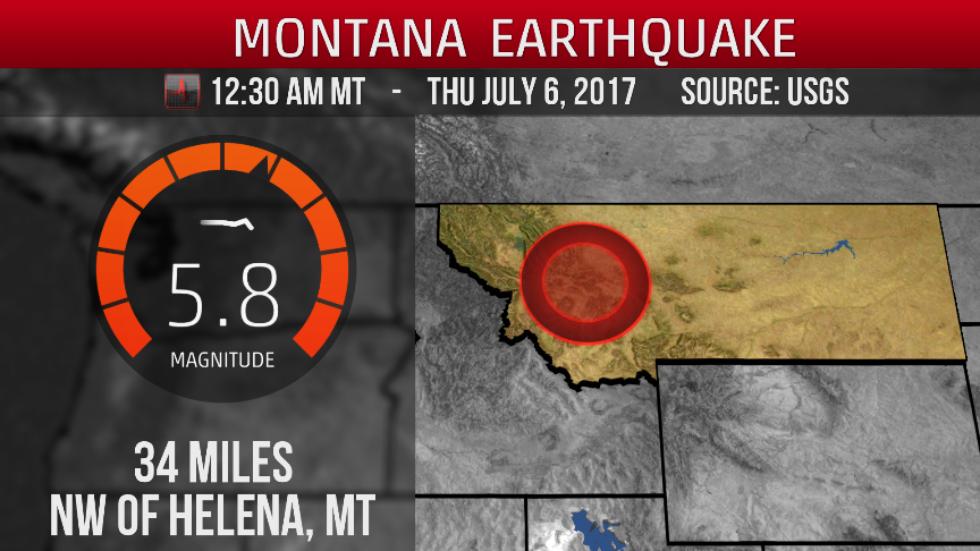 Following a swarm of over 1100 earthquakes recorded in the Yellowstone caldera over the past month, prompting scientists to voice concerns about a dormant Yellowstone “Supervolcano” slowly waking up, overnight these concerns escalated after a strong M5.8 earthquake hit western Montana early on Thursday morning – the strongest quake to hit the area in the past 20 years – the U.S. Geological Survey reported, with Reuters adding that the tremor was felt hundreds of miles away, from Missoula to Billings and some surrounding states.

The quake appears to be the largest to hit Montana since a slightly weaker M5.6 struck outside of Dillon a dozen years ago. By comparison, the state’s largest quake which struck the West Yellowstone region 58-years ago was 7.2 magnitude.

The quake’s epicenter was about 6 miles south of Lincoln, originating from a depth of nearly 3 miles underground, according to a preliminary report from the U.S. Geological Service.

Subsequently the USGS recorded seven more tremors in the same area within an hour of the initial quake, which ranged in magnitude from 4.9 to 3.8.

The quake which struck at 12:30 a.m. local time was strong enough to knock items off of walls and shelves in Helena and Missoula.  Some Twitter users posted feeling tremors as far as Spokane, Wash., Boise, Idaho and Calgary, Canada.

Mike Stickney, seismologist at the Earthquake Studies Office, Montana Bureau of Mines and Geology on the Montana Tech campus in Butte, said the quake was probably the strongest in Montana since October 1964. The location, he said, is not surprising. “It’s right along the axis of the intermountain seismic belt.” He said the quake occurred on a strike/slip fault, a vertical fault where one side moves horizontally against the other, similar to the kind of movement experienced along the San Andreas Fault in California.

That said, he said he “does not believe” the quake is seismically tied to the recent “swarm” of smaller earthquakes in the Yellowstone National Park area. “I don’t see any direct relationship between these two sequences,” he said. “This is a pretty sizeable earthquake. It would certainly have the potential to do structural damage near the epicenter, but we’ve had no reports indicating damage yet.” Others, however, disagree.

Residents in Lincoln briefly lost power and there was a gas leak in Helena, the National Weather Service in Great Falls said on Twitter. Lewis and Clark County Sheriff Leo Dutton said Lincoln lost electricity as a result of the quake, but the power has since been restored.

Lisa Large, a bartender at the Wheel Inn Tavern in Lincoln, said the power went out and bottles flew off the shelves when the earthquake hit. Other than that, she said, there wasn’t any major damage there. She was in a fairly jovial mood when called by a Missoulian reporter near closing time at 1:50 a.m. “It slopped all the grease outta the fryer,” she said. “The kitchen’s a mess right now. The lights have been out and they just came back on. Hopefully we don’t get any more aftershocks.”

Quoted by the Missoulian, Dutton said the fire chief in Lincoln was sending people out to check for damage, but they have not found any yet.  Missoula Police Department Corporal Mick McCarthy said the department has had calls from people asking what was going on with the earthquake and some medical calls, but no power outages reported or gas leaks. “No property damage reported yet, but it’s still early,” McCarthy said.

Ray Anderson, 76, told the Associated Press that it was the strongest quake he had ever felt.

Carolyn Kennedy, who lives in South Calgary, said she felt about 20 seconds “of waves” from the tremors. “We heard rumbling noises,” she messages FoxNews.com, adding that perfume bottles on her desk shook from the tremblor.

Twitter lit up around Montana seconds after the quake, with people weighing in from Bozeman to Kalispell to Glacier National Park to Billings and elsewhere in Montana.

“Did the entire state of Montana just have an earthquake?” tweeted Brandon Furr. Sean Ryan of Butte tweeted, “Now that everyone in Montana is awake from that earthquake … you guys want to play Monopoly or something?” Glacier National Park account tweeted, “Western Montana just had a decent-sized earthquake. Good shake here at Park HQ in West Glacier #geology.”

Musician John Mayer, a part-time Bozeman resident, took to Twitter to marvel at the event. “Wow,” he wrote on Twitter. “Earthquake in Montana.”

Wow. Earthquake in Montana. So if you wonder if you're crazy and you're searching the words earthquake and Montana, earthquake Montana.

While minor earthquakes are fairly common, Thursday’s moderate quake was the strongest felt in western Montana in two decades. The last one to exceed 5.0 magnitude was reported 12 years ago near Dillon, according to the USGS. Most of those incidents had epicenters farther south, many centering in the famously active Yellowstone National Park. In total, there have been more than 70 quakes measuring larger than 4.5 in Montana and parts of Wyoming and Idaho since 1925, according to the USGS. The largest quake in state history was magnitude 7.2 in 1959 near west Yellowstone.