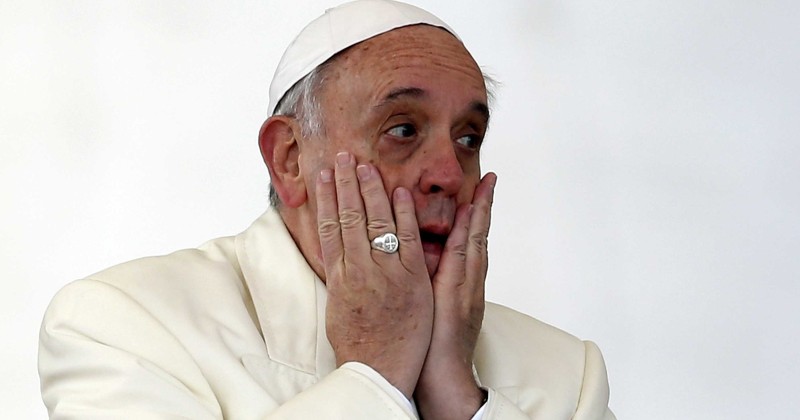 “A top adviser to Pope Francis was charged with multiple historical sex crimes in his native Australia on Thursday, bringing a worldwide abuse scandal to the heart of the Vatican.”

“Appointed Vatican economy minister by Francis, Cardinal George Pell is the highest-ranking Church official to face such accusations. He asserted his innocence and said the pontiff had given him leave of absence to return to Australia to defend himself.”

“But Pell, a former archbishop of Melbourne and Sydney, had come under pressure from an Australian government commission on institutional child abuse, and had himself been under investigation for at least a year.”

What are the chances Cardinal Pell survives this scandal? Already ill, will he conveniently die before the Australian investigation puts him through the wringer?

The intrigues of the Vatican are endless, and they always have been. The silent wars taking place between factions have taken many forms. In this case, Cardinal Pell was originally appointed by Pope Francis to clean up the financial mess (numerous scandals) in the Church, but Pell ran into roadblocks as he tried to push that agenda forward.

Whether Pell is innocent or guilty of pedophilia, it’s possible that power blocs within Vatican City decided to discredit him and sideline him, in order to maintain secrecy about the money crimes they’ve been committing—they ramped up the pedophile investigation in Australia to take Pell out of the picture.

Since their earliest days, the Vatican has been a money machine, using religion as a front to raise cash. In the process, the Church “fathers” have condoned and/or participated in child sexual abuse and rape.

It’s absurd to think pedophilia in the Church rears its ugly head here and there, now and then. It’s institutional and embedded and always has been.

As I mentioned in a previous article about another subject, the limited hangout is a typical strategy of large organizations, when faced with exposure. Confession of a crime is made, as if the offense is highly unusual or limited to a particular person or sub-group, and a promise is made to investigate and root out the problem. But the real goal is: admit a “mistake,” make that the whole story (when it isn’t), and hope the wider ongoing crime vanishes from public consciousness.

“Well, it was just that one cardinal and some other pedophile bishop we heard about. I’m glad the Church is remedying the situation…”

Not on your life. The Church IS that situation, all over the world.

In the case of Cardinal Pell, a covert Church op can be taking place on several levels at once: Discredit Pell, smash his reputation in order to keep hiding financial crimes inside the Vatican; and produce a limited hangout by admitting that Pell is guilty of pedophile acts, as if he is the exception rather the rule.

For purposes of this covert op, it doesn’t matter whether Pell is, in fact, guilty or innocent. It only matters that he serves a purpose.

The public at large, of course, never gets to see the actual op. They only get to see what the Vatican wants them to.

The Papacy and its right arm, the Jesuits (you can reverse that order of power and control) is the granddaddy of all intelligence operations; but that’s another story for another time.