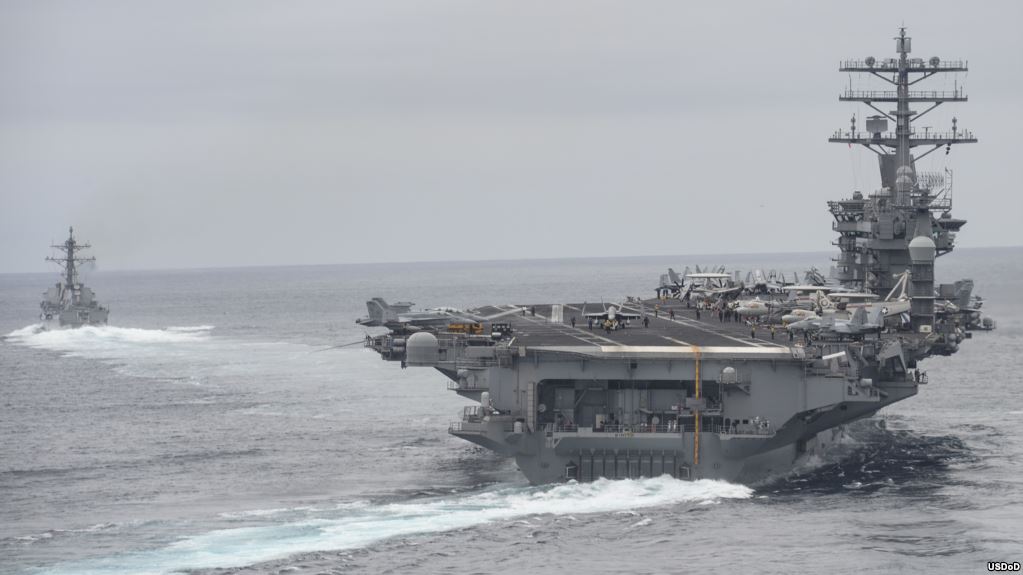 The United States is sending a third aircraft carrier strike force to the western Pacific region in an apparent warning to North Korea to deter its ballistic missile and nuclear programs, two sources have told VOA.

The USS Nimitz, one of the world’s largest warships, will join two other supercarriers, the USS Carl Vinson and the USS Ronald Reagan, in the western Pacific, the sources told VOA’s Steve Herman.

But North Korea’s growing nuclear and missile threat is seen as a major security challenge for President Donald Trump, who has vowed to prevent the country from being able to strike the U.S. with a nuclear missile, a capability experts say Pyongyang could have some time after 2020.

Sitting alongside Japanese Prime Minister Shinzo Abe, Trump said Friday just before the start of Group of Seven (G-7) meetings in Sicily that G-7 leaders would have a “particular focus on the North Korea problem.”

A White House statement issued Friday said the two leaders have agreed to “enhance sanctions on North Korea” in an attempt to prevent the further development of North Korea’s ballistic missile and nuclear programs.

The U.S. military, meanwhile, will test a system to shoot down an intercontinental ballistic missile (ICBM) for the first time next week.It is intended to simulate a North Korean ICBM aimed at the U.S.

The Missile Defense Agency said it will test an existing missile defense system on Tuesday to try to intercept an ICBM. The Pentagon has used the Ground-Based Midcourse Defense (GMD) system to intercept other types of missiles, but never an ICBM.

The GMD has been inconsistent, succeeding in nine of 17 attempts against missiles without intercontinental range capability since 1999.

The most recent test, in June 2014, was successful — but three straight subsequent tests were failures.