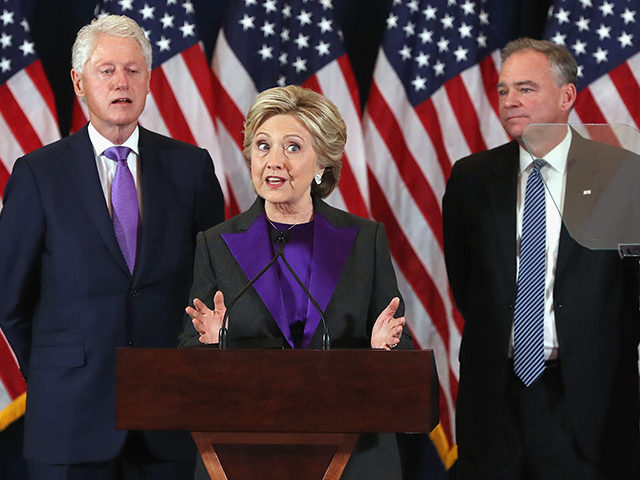 The blistering behind-the-scenes book, by Jonathan Allen and Amie Parnes, illustrates how Hillary Clinton furiously blamed her defeat on the FBI investigation into her private emails, Russian interference, and Trump’s supposed support from “white nationalists.”

On a phone call with a longtime friend a couple of days after the election, Hillary was much less accepting of her defeat. She put a fine point on the factors she believed cost her the presidency: the FBI (Comey), the KGB (the old name for Russia’s intelligence service), and the KKK (the support Trump got from white nationalists).

“I’m angry,” Hillary told her friend. And exhausted. After two brutal campaigns against Sanders and Trump, Hillary now had to explain the failure to friends in a seemingly endless round of phone calls. That was taking a toll on her already weary and grief-stricken soul. But mostly, she was mad— mad that she’d lost and that the country would have to endure a Trump presidency.

The authors detail how Clinton went out of her way to pass blame for her stunning loss on “Comey and Russia.”

“She wants to make sure all these narratives get spun the right way,” a longtime Clinton confidant is quoted as saying.

The book further highlights how Clinton’s Russia-blame-game was a plan hatched by senior campaign staffers John Podesta and Robby Mook, less than “within twenty-four hours” after she conceded:

That strategy had been set within twenty-four hours of her concession speech. Mook and Podesta assembled her communications team at the Brooklyn headquarters to engineer the case that the election wasn’t entirely on the up-and-up. For a couple of hours, with Shake Shack containers littering the room, they went over the script they would pitch to the press and the public. Already, Russian hacking was the centerpiece of the argument.

The Clinton camp settled on a two-pronged plan — pushing the press to cover how “Russian hacking was the major unreported story of the campaign, overshadowed by the contents of stolen e-mails and Hillary’s own private-server imbroglio,” while “hammering the media for focusing so intently on the investigation into her e-mail, which had created a cloud over her candidacy,” the authors wrote.

“The press botched the e-mail story for eighteen months,” one person who was part of the strategy is quoted as saying. “Comey obviously screwed us, but the press created the story.”

The book also details Clinton’s confusion and frustration with President Obama, whom she apparently thought didn’t do enough “to apprise the public that the Russians had gone way beyond what had been reported”:

She wondered why the president hadn’t leaned harder into making the case that Vladimir Putin was specifically targeting her and trying to throw the election to Trump. “The Russia stuff has really bothered her a lot,” one of the aides said. “She’s sort of learning what the administration knew and when they knew it, and she’s just sort of quizzical about the whole thing. She can’t quite sort out how this all played out the way that it did.” On the long list of people, agencies, and international forces Hillary blamed for her loss, Obama had a spot.

Elsewhere, however, Allen and Parnes provide polling numbers and other raw data that pinpoint the precise reason why Clinton lost — hint: it’s not Russia — men and working class Democrats in Pennsylvania turning to Trump, and how he simply outperformed her with white voters in battleground Florida:

Exit polls in Pennsylvania showed that Clinton and Obama won women by thirteen-point margins in 2016 and 2012, respectively. But in a state that has never elected a woman governor or US senator, men favored Trump by seventeen points— a massive increase over Mitt Romney’s three-point edge in 2012. From a geographical perspective, Hillary did better than Obama in Philadelphia and its surrounding suburban counties but lost working-class Democratic strongholds in Erie and Luzerne Counties that Obama had carried.

In Florida, Trump crushed Hillary in the suburban swing areas outside Tampa and St. Petersburg. As he did nationally, Trump did better with white Floridians than Romney had, doubling up Clinton at 64 percent to 32 percent. Romney had beaten Obama 61 percent to 37 percent among Florida whites.

Clinton also lost the reliably-Democratic state of Wisconsin, where she had “had been blown out by Bernie Sanders in the Wisconsin primary” and failed to campaign for months after her party’s national convention:

Turnout in Milwaukee, the key vote center for Democrats in Wisconsin, was off by sixty thousand or so votes from 2012, and nearly three dozen counties in the state saw the partisan margin from that year flip by 20 percentage points or more in 2016. Trump won 52 percent to 41 percent in Brown County, home of Green Bay, site of the visit that Hillary and Obama canceled after the Pulse nightclub shooting in Orlando. Obama had won the county by nine points in 2008 and lost it by two points in 2012. Hillary, who had been blown out by Bernie Sanders in the Wisconsin primary, never set foot in the state.

Lastly, Shattered examines how Trump turned Michigan — a state that had been blue since 1992 — into a red state:

About a dozen counties in Michigan flipped from Obama to Trump, but one mattered most. Macomb County, flush with working- and middle-class whites, gave Trump more than his statewide margin of victory. Obama won the county by 16,103 votes in 2012; Trump took it by 48,348 votes, or about four times his statewide margin.