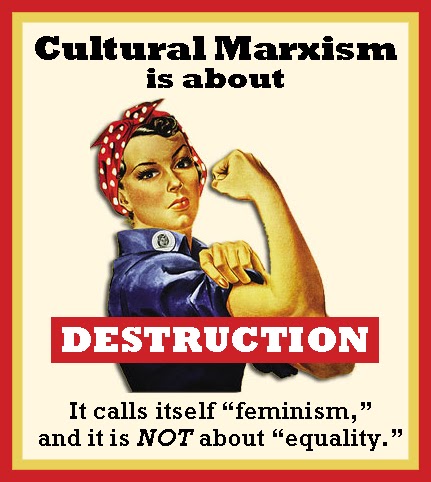 The men’s rights movement is the organized backlash to the highly misguided and hidden agenda of the contrived feminist movement.

SOTN Editor’s Note:
The covert agents of cultural marxism stealthily established the feminist movement in the United States during the 1960s.  As a main pillar of their socialist platform, the cultural marxists inaugurated identity politics in America by, first, profoundly dividing by gender. In this way, their fundamentally communist agenda was purposefully advanced to tear the social fabric of American society by undermining the nuclear family.

Sadly, the cultural marxists have been quite successful in this destructive enterprise via rabid feminism.  The American Republic is now much more vulnerable to collapse after 8 years of Obama’s socialist regime empowering the pervasively detrimental feminist movement. And the Trump presidency has only served to galvanize the feminazis like never before (see photo below). Whether the men’s rights movement will be effective in exposing the very worst of feminism remains to be seen.  Nevertheless, the highly organized and hardcore feminist movement has already inflicted irreversible damage on the nation-at-large.  The extreme divisiveness of the 2016 elections stands as a testament to this extremely unfortunate state of affairs.

In light of the rapid societal degradation which results wherever the feminazis set their sights, the movie trailer below is recommended for viewing and wide dissemination.  “The Red Pill” documentary offers an excellent and balanced perspective rarely seen anywhere in the mainstream media.  It objectively reveals the feminist movement for what it has truly become—a full-blown hate movement.

“When a feminist filmmaker sets out to document the mysterious and polarizing world of the Men’s Rights Movement, she begins to question her own beliefs. The Red Pill chronicles Cassie Jaye’s journey exploring an alternate perspective on gender equality, power and privilege.” (Source: “THE RED PILL” trailer)