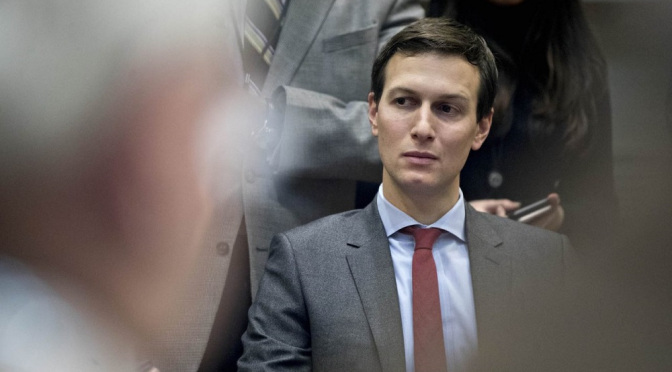 Jared Kushner, the son-in-law and confidant of U.S. President-elect Donald Trump, is a director and board member at the Kushner Foundation which has given money to illegal Israeli settlements in the West Bank as well as extremist Jewish groups connected to violent attacks against Palestinians, Israeli newspaper Haaretz reported Monday.

The findings are based on tax records from Kushner’s parents for the years 2010-2014, which show that the Charles and Seryl Kushner Foundation gave almost US$60,000 to settlement projects and organizations in Israel, which Washington deems publically as illegal, yet finds covert ways of funding.

Trump has said that Kushner, who is a married to Ivanka Trump and is an Orthodox Jew, would be “very good” as his Middle East envoy to broker a deal between the Palestinians and Israelis.

The Kushner Foundation gave US$20,000 to the group American Friends in Beit El Yeshive, an organization that supports projects in the ultra-conservative settlement of Beit El.

Beit El was built on private Palestinian land without Israeli government approval, according to Haaretz and human rights groups.

More shocking is that the president of that group is David Friedman, who advised Trump on foreign policy in Israel and Palestine and is his real estate lawyer who told AFP in October that in his view settlements are not illegal and that he believed Trump agrees with him.

To top it all off, the Kushner foundation has given money to one of the most extreme groups within the settler community. The foundation gave funds to the radical “Od Yosef Chai” group in the settlement of Yitzhar.

“This particular yeshiva has served as a base for launching violent attacks against nearby Palestinians villages and Israeli security forces, as well; as a result, it no longer receives funding from the Israeli government,” Haaretz reported Monday.

This settlement is also seen as the leader of the settler movement’s so-called “price tag” policy, which calls for attacks against Palestinians in retaliation for actions of the Israeli government against West Bank settlements.

The Washington Post, which confirmed the Haaretz report on Kushner’s foundation, said this year’s Republican platform’s position on Israel was changed to what Trump called the most pro-Israeli stance “of all time.” It does not explicitly call for a two-state solution and rejects the “false notion” that Israel is occupying the West Bank, the U.S. newspaper said.

Although the U.S. is the number one sponsor of Israel financially, militarily and politically, Trump’s staunch right-wing position will most likely translate into even more suffering and repression for the Palestinian people.

Demonstrators turned out in force at the School of African and Asian Studies in central London to protest the presence of the Israeli Ambassador to the UK. Mark Ragev was invited to speak at the prestigious university against the wishes of many students and pro-Palestinian organizations.