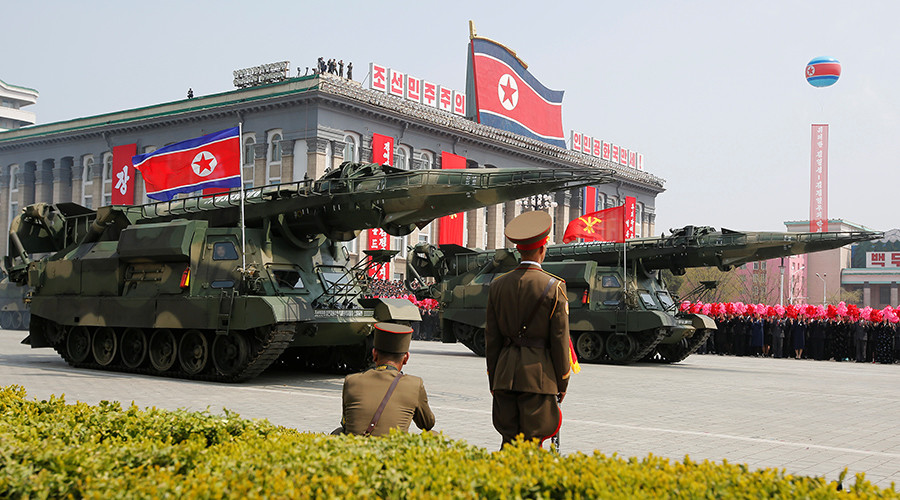 April 27, 2017 “Information Clearing House” – US media reports this week blamed North Korea for having a dastardly role in an alleged chemical weapons massacre in Syria. As if the two countries could not be demonized enough. The latest spin of the “axis of evil” suggests Washington is hell-bent on war.

Demonize, dehumanize, destroy. That’s the logic being throttled by the Trump administration toward both North Korea and Syria. This week war hawk US Senator Lyndsey Graham after a dinner with President Trump referred to North Korean leader Kim Jong-un as a “nutjob,” while Trump earlier labeled Syrian leader Bashar Assad an “animal.”

Now the two “evil dictators” are bonded in US media reports for complicity in the alleged chemical weapons attack earlier this month in Syria’s Idlib Province, where it is claimed Assad’s armed forces dropped toxic munitions on civilians, killing up to 80.

The supplier of the alleged chemical weapons in Syria is the “Kim Jong-un regime” in North Korea, according to US reports.

USA Today claimed: “The horrors of the civil war in Syria have proved a blessing for North Korea. The regime of Kim Jong-un has made a killing from selling arms and ammunition to the regime of fellow dictator, Bashar Assad.” It goes on to cite claims that a “key supplier” of Syria’s chemical weapons arsenal is the northeast Asian nation.

Another publication, Defense One, headlined: “Syria’s war has been a goldmine for North Korea.”

Both outlets rely heavily on one source, Professor Bruce Bechtol, from Angelo State University, Texas, who is described as a “North Korea expert.”

Bechtol is quoted as saying: “I would be stunned, I would be surprised if the nerve agent used by the Assad regime on April 4 in Khan Sheikhoun [Idlib Province] was not supplied by North Korea.”

In other words, this so-called “expert” doesn’t really know. Professor Bechtol is making a conjecture. Reference to his past research on the subject of North Korea-Syria military links, in 2015, make sweeping assertions about how the two nations have collaborated on developing chemical weapons.

Tellingly, the US “academic” makes a prominent citation of the CIA and other intelligence agencies in his assessment of North Korea and Syria’s military connections.

Last week, Fox News accused the countries of having a “long history” of sharing chemical weapons technology, without providing any corroborating details.

Meanwhile, a search in the database of the Stockholm International Peace Research Institute – a recognized authority on global weapons trade – finds there is scant transfer of military technology, including chemicals, between North Korea and Syria.

In any case, claims chemical weapons were deployed by the Syrian government also ignore earlier reportsby United Nations agencies that all such munitions had been completely destroyed under a Russian-US brokered decommissioning deal in 2013.

Media speculation Korean leader Kim Jong-un had some role in facilitating the death of civilians in Syria – due to alleged supply of lethal toxins appear to be orchestrated with the aim of demonizing. All the better, from the US propaganda point of view, because it brings him into the same target scope as Syria’s Assad, whom Washington has been trying to oust for the past six years in a proxy regime-change war.

The game of “evil dictator association” is a reboot of the “axis of evil” narrative first announced by former US President G.W. Bush in 2002. In the wake of the 9/11 terror incidents, the Bush administration fingered six states as state terror-sponsors and pursuing weapons of mass destruction. The alleged “axis of evil” unveiled by Bush comprised: Iraq, Iran, North Korea, Syria, Libya, and Cuba.

Of course, there were good grounds to suspect the narrative as a propaganda device, dutifully assisted by Western news media, as a way to target “rogue regimes” for American military attack. Iraq and Libya have been “dealt with.” Evidently, North Korea and Syria (as well as Iran) are a “work in progress” for Washington.

The allegation of chemical weapons from North Korea to Syria is a transparent attempt at a frame-up.

For a start, the alleged incident on April 4 in Khan Sheikhoun has relied solely on dubious videos sourced from terrorist-affiliated militants and their media agents, known as the White Helmets.

Several respected weapons authorities, such as MIT Professor Theodore Postol, dispute the claims asserted by Western governments and the media that Sarin gas was used. These authorities have also voiced concern that the whole incident was a propaganda stunt or false flag instigated by Western-sponsored militants in order to discredit the Assad government and justify US military intervention.

Three days after the April 4 incident, amid much sensational Western media accusations against the Syrian government, US President Trump launched 59 cruise missiles on the country. It is a matter of doctrinal thought that Assad committed a war crime with chemical weapons. According to Washington and its allies, attacking Syria with missiles is not an act of aggression, it is an act of “righteous revenge.”

“Gas a baby, and you can expect action,”declared Trump’s White House spokesman Sean Spicer unburdened of any legal standard.

This is while the US, Britain, and France have blocked a formal request from Russia, Iran, and Syria for an impartial, on-site investigation into the Khan Sheikhoun incident. Russia’s Foreign Minister Sergey Lavrov said the Western powers showed they do not want to find out the truth of what really happened because their priority is pushing the agenda for regime change in Syria.

The alleged connection to North Korea makes the propaganda drive even more seductive. Not only is Syria demonized without any proof, but now North Korea can also be vilified for having a dastardly role in “gasing beautiful babies,” as Trump would have it.

The US targeting of North Korea with nuclear-capable submarines, warships, and intercontinental ballistic missiles has taken provocative threats against Pyongyang to a reckless level. Trump and his top officials have repeatedly warned recently that the US is ready to launch pre-emptive strikes on North Korea.

It is arguable that US conduct amounts to acts of aggression. North Korea’s nuclear and missile program may have breached international sanctions, but the actions of the US and its allies holding war exercises are insanely disproportionate. The world is being put on a hair trigger for war, at Washington’s initiative.

The Trump administration, given free rein by supine news media, is making the incendiary claim that “it fears time is running out” on stopping Kim Jong-un from obtaining a nuclear missile capable of hitting the US.

If the US launches a pre-emptive strike on North Korea, it will probably be devastating, as the Trump administration has warned. The extraordinary dropping of the Mother of All Bombs in Afghanistan earlier this month seems to have been a macabre rehearsal for what would otherwise be seen as a horrific attack on North Korea.

Smearing the North Korean leader with alleged atrocities by chemical weapons in Syria is another grim pointer that the US is preparing to commit a catastrophic crime. By a process of demonizing and dehumanizing, it is creating a license to destroy.

However, such demonic US behavior should actually turn world attention to who exactly is the real axis of evil and number-one threat to peace.