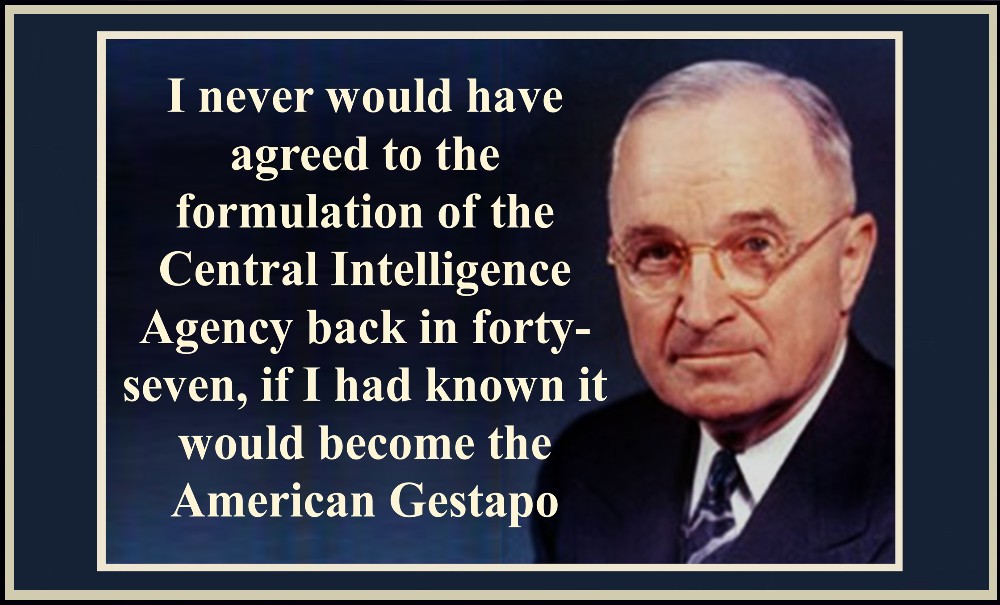 He explained that it was solely an attempt to consolidate intelligence from many different intelligence agencies (page 285):

I needed … the President needed at that time a central organization that would bring all the various intelligence reports we were getting in those days, and there must have been a dozen of them, maybe more, bring them all into one organization so that the President would get one report on what was going on in various parts of the world. Now that made sense, and that’s why I went ahead and set up what they called the Central Intelligence Agency.

I think [creation of the CIA] was a mistake. And if I’d know what was going to happen, I never would have done it.

Why, they’ve got an organization over there in Virginia now that is practically the equal of the Pentagon in many ways. And I think I’ve told you, one Pentagon is one too many.

Now, as nearly as I can make out, those fellows in the CIA don’t just report on wars and the like, they go out and make their own, and there’s nobody to keep track of what they’re up to. They spend billions of dollars on stirring up trouble so they’ll have something to report on. They’ve become … it’s become a government all of its own and all secret. They don’t have to account to anybody.

That’s a very dangerous thing in a democratic society, and it’s got to be put a stop to. The people have got a right to know what those birds are up to. And if I was back in the White House, people would know. You see, the way a free government works, there’s got to be a housecleaning every now and again, and I don’t care what branch of the government is involved. Somebody has to keep an eye on things.

And when you can’t do any housecleaning because everything that goes on is a damn secret, why, then we’re on our way to something the Founding Fathers didn’t have in mind. Secrecy and a free, democratic government don’t mix. And if what happened at the Bay of Pigs doesn’t prove that, I don’t know what does. You have got to keep an eye on the military at all times, and it doesn’t matter whether it’s the birds in the Pentagon or the birds in the CIA.

Similarly, President Kennedy said he wanted “to splinter the CIA in a thousand pieces and scatter it to the winds”.  But he was assassinated a month later.