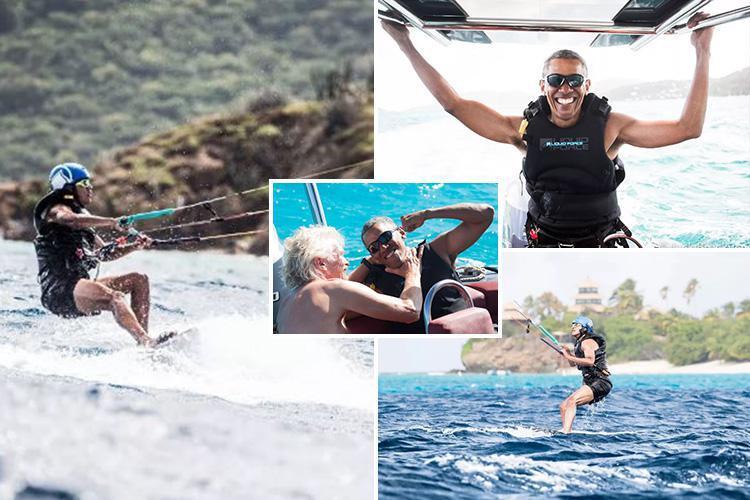 BY COREY CHARLTON  | The Sun

THESE incredible photos show former US President Barack Obama as you’ve never seen him before – wrestling with billionaire pal Richard Branson and learning to kite surf.

Obama, photographed while on holiday on Branson’s luxurious Necker Island, took up the sport after being succeeded by President Donald Trump last month.

He and wife Michelle spent several days on the entrepreneur’s island as they attempted to wind down from the stresses of office.

Branson has now described the couple’s trip to his island in a blog post published online.

He wrote: “It was a huge honour to be able to invite President Barack and Michelle Obama down to the British Virgin Islands for a complete break after Barack finished his second term as President and the family left the White House.

“One of the first stories Barack told me when he and Michelle arrived on Moskito Island was how, just before he became President, he had been surfing on a dangerous break in Hawaii.

“When he came in from an exhilarating session, the new head of his security team turned to him and said: ‘This will be the last time you surf for eight years.’

“For the next eight years he didn’t have the chance to surf, enjoy watersports or do many of the things he loved.

“So it was tremendous to offer him the chance to learn to kitesurf.

“The sport has really taken off in the past decade and we have the perfect conditions and team to help anyone learn.

“I have also wanted to learn foilboard surfing. So we decided to set up a friendly challenge: could Barack learn to kitesurf before I learned to foilboard?

“We agreed to have a final day battle to see who could stay up the longest.

Branson added: “Barack started learning to kitesurf on the beach on Necker for two days solid, picking up the basics and flying a kite as if going back to being a child again.

“Then he went into the water, standing up and getting a feel for the kite. Finally, he put the board at his feet and gave it a go.

“Being the former president of America, there was lots of security around, but Barack was able to really relax and get into it.

“As you can see in the video, Barack and I both fell many times, but we kept trying again and again and made progress over the days. We were neck and neck until the last run on the last day, when I got up on the foilboard and screamed along for over 50 metres, three feet above the water.

“I was feeling very pleased with myself, only to look over and see Barack go 100 metres on his kiteboard! I had to doff my cap to him and celebrate his victory.

“On his next visit, we plan to do the long kite over to Anegada together. Next time, may the best (British) man win!”

They had travelled from Palm Springs in California, where they had spent the first part of their holiday as a guest of the Spanish ambassador while Donald Trump took office.

Former President Barack, wearing dark shades and a flipped-back baseball cap was seen scuttling along in sandals waving to the camera.

And ex-First Lady Michelle, wearing a blue top with a white throwover and a fedora hat, beamed as they walked through the picturesque island.

A passer-by wishing them a happy holiday was greeted with a cheerful “thank you” from the former commander-in-chief.