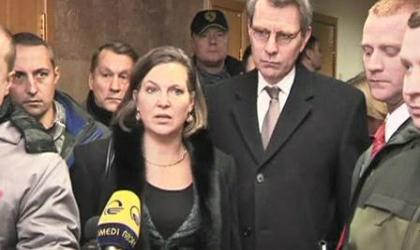 Victoria Nuland: Assistant Secretary of State for European and Eurasian Affairs at the United States Department of State under SOS Hillary Clinton 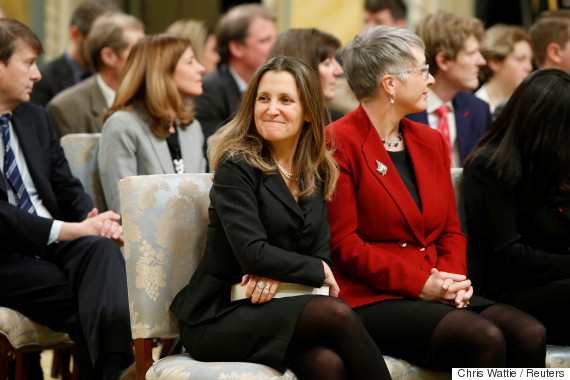 Chrystia Freeland looks on after being sworn-in as Canada’s foreign affairs minister during a cabinet shuffle at Rideau Hall in Ottawa, Ontario, Canada, January 10, 2017. REUTERS/Chris Wattie

The Strange Case of Chrystia Freeland

By Jonathon Ludwig
The Canadian Patriot

To comprehend Freeland’s strange and dangerous role as a strategically-placed Rhodes Scholar within the greater process now unfolding on the stage of history, some context is necessary.

Since November 2013, Freeland has sat as a Member of Parliament in the Toronto riding formerly occupied by fellow Rhodes Scholar and Liberal Party controller Bob Rae. Rae himself stepped down from the position in order to make way for Freeland’s entry into Canadian politics.

With her election victory, Chrystia has become a leading handler of Justin Trudeau and a key “change agent” enforcing a policy of depopulation and even war with Russia. The relationship of Freeland to Trudeau is parallel to that of Valerie Jarrett’s role as handler of American puppet-President Barack Obama. Both Jarrett and Freeland share an outlook that is in complete conformity to the anti-nation state, Malthusian ideology that guides the British Empire.

Freeland’s career as a British operative began with her acceptance of a Rhodes Scholarship while studying at Harvard University, which brought her an all expenses-paid “education” at the elite Oxford College in 1993, opening doors to the upper echelons of the Anglo-Dutch oligarchy. The money provided for her scholarship came from the trust established by a Rothschild agent named Cecil Rhodes which was established upon his death in 1902. Since that date, thousands of youth have been conditioned through this scholarship and have infiltrated governments in every field of influence from media, academia, politics and business.

What is the Rhodes Trust?

Cecil Rhodes was a devout imperialist and racist who led in the creation of British diamond mining in Africa, killing thousands, and establishing a movement to regain control of the world. Rhodes wrote down in intention in a series of wills that his Trust was to form

“a society which should have its members in every part of the British Empire working with one object and one idea we should have its members placed at our universities and our schools and should watch the English youth passing through their hands just one perhaps in every thousand would have the mind and feelings for such an object, he should be tried in every way, he should be tested whether he is endurant, possessed of eloquence, disregardful of the petty details of life, and if found to be such, then elected and bound by oath to serve for the rest of his life in his Country. He should then be supported if without means by the Society and sent to that part of the Empire where it was felt he was needed.”

In another will Rhodes was even more clear asking:

This is the intention that has guided the vast Rhodes Scholarship program over the past century, and has been a driving force behind the growth of two seemingly opposing ideologies that have governed the world in a state of tension since the end of the second World War. Those ideologies are a monetarist view that presumes mankind to be a selfish consuming animal in his essence, while the other took the form of an environmentalist worldview that presumes mankind to be a selfish animal in his essence. By sharing common assumptions regarding man’s nature, both systems can be easily controlled by the same oligarchic forces to play a polarized

Society against itself to such an extent that a common blindness of the trap prevents its victims from seeing the higher ugly agenda controlling it.

While the  conservative party of Harper has typically embodied the monetarist polarity, the left wing NDP has increasingly represented its opposing green extreme. Now that the monetarist worldview is disintegrating along with the financial system, the new Liberals are being re-designed to personify a middle synthesis of the two extremes under what Freeland has referred to as a “green New Deal”. Freeland’s role has been to promote this new synthesis which necessitates that the “new rich” that rose to power under globalization adopt a more standardized technocratic outlook.

The Rise of the New Global Elite

Chrystia Freeland’s work as a journalist began in a station in Ukraine and Russia working for the London Economist, Financial Times, and Washington Post. It was in this position that she became personally acquainted with the leading Ukrainian and Russian oligarchs such as Viktor Pinchuk and Mikhail Khodorkovsky . She then became Deputy Editor of the Financial Times of London, and Globe and Mail of Canada.

Freeland  has made it clear that she understands well that there is a fundamental difference in cultural identities of the “new rich” relative to the older oligarchic families which she serves. . In the 2011 Rise of the New Global Elite, she describes it as follows:

To grasp the difference between today’s plutocrats and the hereditary elite, who “grow rich in their sleep”, one need merely glance at the events that now fill high-end social calendars.”

Freeland then breaks down the categories of “new plutocrats” into two subcategories: the good, technocratic friendly plutocrats who are ideologically compatible with the New World Order, such as Bill Gates, Warren Buffet, George Soros, et al and the “bad” plutocrats who tend not to conform to the British empire’s program of global governance and depopulation under the green agenda. In Freeland’s world “good oligarchs” are those who adhere to this agenda, while “bad oligarchs” are those who do not.

In the same paper, Freeland wrote:

if the plutocrats’ opposition to increases in their taxes and tighter regulation of their economic activities is understandable, it is also a mistake. The real threat facing the super-elite, at home and abroad, isn’t modestly higher taxes, but rather the possibility that inchoate public rage could cohere into a more concrete populist agenda– that, for instance, middle-class Americans could conclude that the world economy isn’t working for them an decide that protectionism… is preferable to incremental measures.” Quoting billionaire Mohamed El-Erian, the CEO of Pimco “one of the big surprises of 2010 is that the protectionist dog didn’t bark.”

Freeland ended her article with this message:

The lesson of history is that, in the long run, super-elites have two ways to survive: by suppressing dissent or by sharing their wealth… Let us hope the plutocrats aren’t already too isolated to recognize this”.

But what does Freeland really think of the technocratic management under a plutocratic governance of society?

In Plutocrats vs. Populists, Freeland lets her pro-Plutocratic worldview out of the bag when she gushes:

At its best, this form of plutocratic political power offers the tantalizing possibility of policy practiced at the highest professional level with none of the messiness and deal making and venality of traditional politics… a technocratic, data-based, objective search for solutions to our problems”

Since a technocratic managerial class committed to a common ideology must be solidified for this system to work, Freeland goes on to make the case to recruit young people to the imperial civil service:

Smart, publicly minded technocrats go to work for plutocrats whose values they share. The technocrats get to focus full time on the policy issues they love, without the tedium of building, rallying– and serving– a permanent mass membership. They can be pretty well paid to boot.”

Where is she now?

Freeland is now engaged in a full frontal assault led by Obama and the British empire against the Russian Federation. Using her vast connections with the Ukrainian oligarchy, and the technocrats committed to becoming part of the euro and NATO, Freeland has joined the ranks of Victoria (fuck the EU) Nuland, Barack Obama, John McCain and John Baird. Since March 3, 2014, Freeland has been based in Ukraine and has represented the hard line confrontational call for sanctions and isolation of Russia. As a result of her promotion of anti-Russian propaganda and collaborating with Nazis in Ukraine, the Russian government has included Freeland on its list of 13 Canadian’s whose Visas have been revoked from Russia. Other banned Canadians included such British operatives as the Clerk of the Privy Council Office and Irwin Cotler.

Freeland is now providing daily briefings to Justin Trudeau and has helped steer the Liberal Party Economic  policy program as co-chair of the Economic Council of Advisors since 2013.