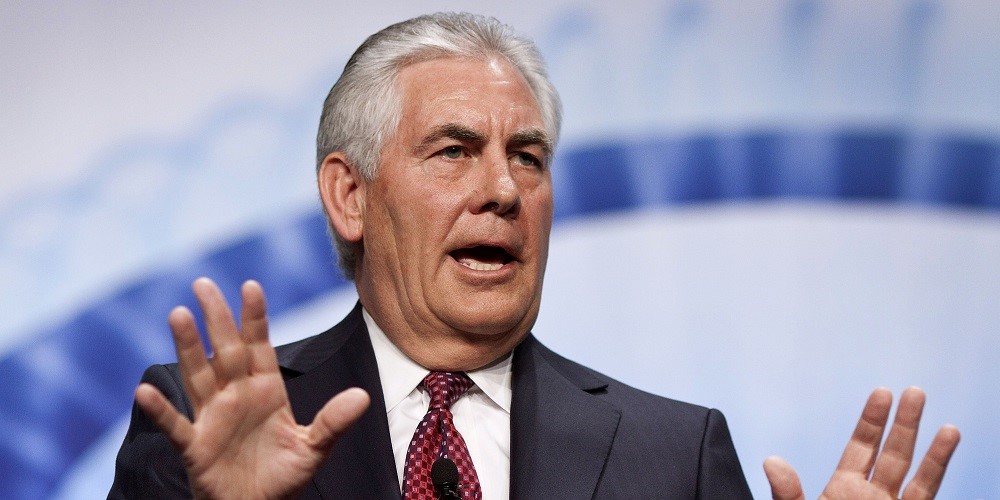 Update: It’s official, moments ago President-elect Trump confirmed he will nominate ExxonMobil CEO Rex Tillerson to be his secretary of state: In a statement released by his transition team early Tuesday, Trump called Tillerson’s career “the embodiment of the American dream.”

“Through hard work, dedication and smart deal making, Rex rose through the ranks to become CEO of ExxonMobil, one of the world’s largest and most respected companies,” the president-elect said, adding that Tillerson’s “tenacity, broad experience and deep understanding of geopolitics make him an excellent choice.”

“He will promote regional stability and focus on the core national security interests of the United States. Rex knows how to manage a global enterprise, which is crucial to running a successful State Department, and his relationships with leaders all over the world are second to none,” Trump added.

I have chosen one of the truly great business leaders of the world, Rex Tillerson, Chairman and CEO of ExxonMobil, to be Secretary of State.

After days of speculation and strawmen, and following Mitt Romney’s statement earlier, AP is reporting that President-elect Donald Trump has selected Exxon Mobil CEO Rex Tillerson to lead the State Department, according to two people close to Trump’s transition team.

The decision caps a lengthy process that often played out In public and exposed rifts within Trump’s transition team. But Tillerson’s close ties to Russia could still complicate his Senate confirmation hearings.

Trump was set to formally announce Tillerson’s nomination Tuesday morning. The people close to Trump’s transition insisted on anonymity because they were not authorized to disclose the pick ahead of that announcement.

If approved, Tillerson would be the first secretary of state in modern history without previous government experience, The Washington Post reported.

As KCTV5 reports, he is being called a controversial pick, partly because of his ties with Russian leader Vladimir Putin. Putin gave the CEO a Russian government award three years ago after Exxon-Mobil cut a major oil deal with a Russian company.

Russia has recently been accused of hacking in an effort to influence the result of the presidential election in Trump’s favor. President Barack Obama ordered an investigation Friday into Russian influence on the election.

Trump dismissed concerns about Russia in an interview with Chris Wallace on Fox News Sunday, deeming the matter “ridiculous.”

The president-elect also used the interview to praise Tillerson for his business acumen and noted the CEO would be useful in matters regarding Russia because he “knows many of the players and he knows them well.”

He tweeted Sunday about reports that Tillerson would be getting the nomination, calling the CEO “a world class player and dealmaker.”

Trump tweeted this evening that his announcement will be tomorrow morning…

I will be making my announcement on the next Secretary of State tomorrow morning.

As we noted previously, the 64-year-old Texas oilman, whose friends describe as a staunch conservative, emerged as a Secretary of State contender only last week following a meeting with Trump, when it was speculated that he would consider the offer “due to his sense of patriotic duty and because he is set to retire from the company next year.” Tillerson’s appointment would introduce the potential for sticky conflicts of interest because of his financial stake in Exxon: he owns Exxon shares worth $151 million, according to recent securities filings.

A quick biographical sketch of Tillerson courtesy of the WSJ:

The son of a local Boy Scouts administrator, Tillerson was born in Wichita Falls, Texas. He attended the University of Texas, where he studied civil engineering, was a drummer in the Longhorn band and participated in a community service-oriented fraternity.

He joined Exxon in 1975 and has spent his entire career at the company.

For most of his adult life, he has also been closely involved with the Boy Scouts of America, even occasionally incorporating the Scout Law and Scout Oath into his speeches.  Mr. Tillerson played an instrumental role in leading the organization to change its policy to allow gay youth to participate in 2013, Mr. Hamre said. Former Defense Secretary Robert Gates subsequently moved to lift the organization’s ban on gay adult leaders as Boy Scouts president in 2015.  “Most of the reason that organizations fail at change is pretty simple: People don’t understand why,” Mr. Tillerson said in a speech after the 2013 decision, urging leaders to communicate about the policy to help make it successful. “We’re going to serve kids and make the leaders of tomorrow.”

However it is not his Boy Scout exploits that will be the key talking point for pundits in the coming days, but rather his close relationship with Russian president Vladimir Putin.

According to the WSJ, few U.S. citizens are closer to Mr. Putin than Mr. Tillerson,  a recipient of Russia’s Order of Friendship, bestowed by the president…

… who has known Putin since he represented Exxon’s interests in Russia during the regime of Boris Yeltsin.

“He has had more interactive time with Vladimir Putin than probably any other American with the exception of Henry Kissinger,” said John Hamre, a former deputy defense secretary during the Clinton administration and president of the Center for Strategic and International Studies, a Washington think tank where Mr. Tillerson is a board member.

Exxon CEO Rex Tillerson with Vladimir Putin, then Russia’s prime minister, at
a signing ceremony in the Black Sea resort of Sochi in August 2011.

In 2011, Mr. Tillerson struck a deal giving Exxon access to prized Arctic resources in Russia as well as allowing Russia’s state oil company, OAO Rosneft, to invest in Exxon concessions all over the world. The following year, the Kremlin bestowed the country’s Order of Friendship decoration on Mr. Tillerson.

The deal would have been transformative for Exxon. Mr. Putin at the time called it one of the most important involving Russia and the U.S., forecasting that the partnership could eventually spend $500 billion. But it was subsequently blocked by sanctions on Russia that the U.S. and its allies imposed two years ago after the country’s invasion of Crimea and conflicts with Ukraine.

Tillerson spoke against the sanctions at the company’s annual meeting in 2014. “We always encourage the people who are making those decisions to consider the very broad collateral damage of who are they really harming with sanctions,” he said.

As such, many have speculated that under his regime, the State Department may quietly drop any existing sactions against Russia.

Then there is the thorny issue of potential conflicts of interest, and his massive holdings of Exxon stock.

One of the first issues Tillerson would have to resolve as secretary of state would be his holdings of Exxon shares, many of which aren’t scheduled to vest for almost a decade. The value of those shares could go up if the sanctions on Russia were lifted.

The shares would likely have to be sold under State Department ethics rules, Chase Untermeyer, a former U.S. Ambassador to Qatar, said in an interview. “He could not erase his strong relationship with a particular country,” Mr. Untermeyer said. “The best protection from a conflict of interest is transparency.”

Tillerson will sell his $150+ million in XOM shares tax free, courtesy of the same tax break that was introduced in 1989 under the administration of President George H.W. Bush, which allowed Hank Paulson, Colin Powell and plenty of other public servants to dispose of their equity holdings without paying taxes: to get the tax relief, it must be deemed “reasonably necessary” for a public official to divest his shares, or a congressional committee must require the asset sale, according to section 1043 of the tax code, something which is virtually assured in the case of Tillerson.

Finally, the environmentalists will certainly be displeased with Trump’s choice, even thought Tillerson helped shift Exxon’s response to climate change when he took over as CEO in 2006. He embraced a carbon tax as the best potential policy solution and has said climate change is a global problem that warrants action. That was a break from his predecessor, Lee Raymond.

Still, Mr. Tillerson is a polarizing figure among Democrats and environmental activists. They have accused Exxon of sowing doubt about the impacts of climate change during Mr. Raymond’s tenure and say Mr. Tillerson hasn’t done enough to disclose the future impact of climate-change regulations on the company’s ability to get oil out of the ground.

“This is certainly a good way to make clear exactly who’ll be running the government in a Trump administration—just cut out the middleman and hand it directly to the fossil-fuel industry,” said Bill McKibben, the environmental activist and founder of 350.org.

Exxon has disputed the criticism and accused activists and Democratic attorneys general of conspiring against the company.

The son of a local Boy Scouts administrator, Mr. Tillerson was born in Wichita Falls, Texas. He attended the University of Texas, where he studied civil engineering, was a drummer in the Longhorn band and participated in a community service-oriented fraternity.

As secretary of state, Tillerson would be fourth in line to the presidency.