US President-elect Donald Trump and Russian President Vladimir Putin have held their first telephone call, in which the two leaders discussed Syria and agreed to improve and develop bilateral ties, the Kremlin said in a statement. 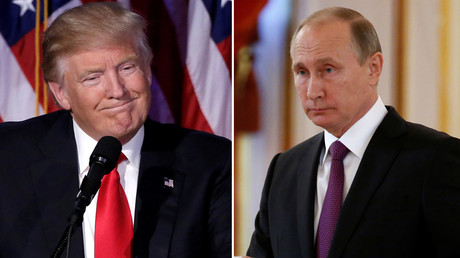 _
In their telephone conversation, the two leaders agreed that they share a common view on “uniting efforts in the fight with the common enemy number one – international terrorism and extremism,” the Kremlin said in a statement published on its website late Monday. The Kremlin added that Putin and Trump also discussed ways to settle the Syria crisis.

Putin and Trump paid special attention to the importance of establishing a stable basis for bilateral relations by developing trade and economic ties between the two countries and working toward “constructive cooperation,” the Kremlin said.

The president and the president-elect agreed to keep in contact by telephone and have discussed the idea of meeting in person.

Next year, Russia and the US will celebrate 210 years since the beginning of their diplomatic relations, which might motivate them “reversing towards pragmatic, mutually beneficial cooperation that would satisfy the interests of both countries, promote stability and safety around the world,” the statement also says.

Trump’s team has issued a statement saying Putin congratulated the US president-elect on his election victory.

Trump is “very much looking forward to having a strong and enduring relationship with Russia and the people of Russia,”the statement said.

Russian parliament speaker Vyacheslav Volodin told NTV Channel on Sunday that Putin and Trump share views on a wide range of matters which might “radically change the situation” in US-Russia relations.

He noted that outgoing President Barack Obama had ignored Russia’s initiatives and deliberately “whipped up tensions, therefore contributing to the growing animosity” between the two countries, while Trump might assume a far different attitude toward Russia.

READ MORE: Putin on Trump victory: Russia is ready to restore relations with US

“If Trump brings his promises to life, it will radically change the situation. We have only seen Trump as a candidate but we are yet to see what [kind of] president he will be,” the Duma speaker said.

Earlier Monday, Kremlin spokesman Dmitry Peskov said that Moscow didn’t plan to contact President-elect Trump before his inauguration in January 2017, but he couldn’t entirely rule out the possibility of such contacts, including letters, telephone calls and meetings. Peskov’s statement came in response to speculations that Donald Trump’s team had contacted Russian officials on numerous occasions.