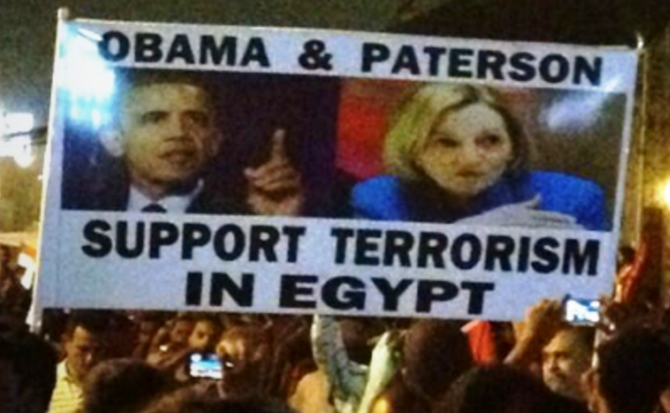 Presidential Study Directive-11:  The Secret Scheme That Destroyed The Middle East Via The Arab Spring

The once-fledgling Islamic State would never evolve from its “junior varsity” status to the Islamic terrorist hegemon that it is today without the wisdom, guidance, and support of Barack Obama and Hillary Clinton, a highly secretive classified document reveals.

The Islamic State currently features 43 affiliates in 20 countries and continues to control Mosul, the second-largest city in Iraq. When Obama assumed office, ISIS attracted roughly 1,000 fighters and was referred to as al Qaida in Iraq, or the Islamic State of Iraq, as it was contained to one country.

Obama and Clinton in 2010 then outlined their new and untested approach to Middle East policy in the document titled Presidential Study Directive-11. In an op-ed dated March 6, 2011, David Ignatius with The Washington Post helpfully delves into PSD-11. He writes, “This is the president as global community organizer — a man who believes that change is inevitable and desirable, and that the United States must align itself with the new forces shaping the world.”

Obama then announced America’s new policy during a global apology tour that U.S. protocol in the Middle East and with the Muslim world would change dramatically.

Subscribe today to get intelligence and analysis on defense and national security issues in your Inbox each weekday morning from veteran journalists Jamie McIntyre and Jacqueline Klimas.

The United Arab Emirates-based publication, Middle East Briefing, in an analysis of Freedom of Information Act documents and other sources, found that under PSD-11 the State Department would lead an effort to build “civil society” — particularly nongovernmental — organizations to alter the internal politics of targeted countries.

Under PSD-11, the Obama administration deliberately pivoted from a strategy that focused on maintaining stability in the Middle East to a strategy emphasizing U.S. support for regime change — regardless of the impact it might have on the region’s stability. That is why we have gone from a general state of stability in the region in 2009 to the Middle East chaos we have now. Officials did not concern themselves with questions over whether new regimes would be allies or foes of the U.S. – or U.S. intelligence agency warnings about the jihadist chaos such regime change might unleash. They chose to believe the few rosy sunglass analyses.

Ignatius referred to intelligence analysts who said at the time, “…Islamic extremists don’t seem to be hijacking the process of change.” He quotes one intelligence analyst who discounted the threat from the Muslim Brotherhood. The West had previously ostracized the movement over its violent tendencies.

Individuals who reviewed documents released under FOIA concluded that State believed “that the Muslim Brotherhood was a viable movement for the U.S. to support throughout North Africa and the Middle East.” As a result, “American diplomats intensified contacts with top Muslim Brotherhood leaders and gave active U.S. support to the organization’s drive for power in key nations like Egypt, Libya, Tunisia and Syria…” It represented a major shift in decades long U.S. policy.

In the ensuing months, the Obama-Clinton administration then abandoned Iraq and prioritized promoting regime change in Egypt, Tunisia, Libya, Yemen, Saudi Arabia, Bahrain and Syria above stability in the Middle East. It engaged with the Muslim Brotherhood, al-Qaidaelements and other syndicates that it naively considered harmless and erroneously believed would foster democratic reforms.

Today the countries that America deserted or knocked over — Iraq, Yemen, Libya and Syria — are failed states. Tunisia remains a work in progress, and Egypt is slowly recovering from its disastrous experiment with Muslim Brotherhood leadership.

PSD-11 and the resulting decisions based upon it reshaped the Middle East substantially. Its flawed and naive analysis and the policies that sprang from it created conditions that fostered the rapid expansion of Islamist terror, specifically ISIS, and have sent the Middle East into barbaric turmoil.

The first principle enshrined in PSD-11 included Obama’s belief that this is “your revolution” which led America to abandon Iraq. Standing on the right side of history by switching sides and partnering with the Muslim Brotherhood underpinned his second major guiding principle.

The reported enshrinement of these two theoretical propositions in PSD-11 as a new national security strategy were dramatic reversals of longstanding bipartisan agreement among lawmakers.

The answer as to why ISIS gained power and influence, and why stability in the Middle East has disastrously deteriorated, does not require extensive analysis. As an official in the Obama White House indicated at the time, “It’s a roll of the dice, but it’s also a response to reality.” The Obama-Clinton administration gambled with America’s national security by embracing radical jihadists, and the world lost.