DEUTSCHE BANK HANGS BY A THREAD ON EVE OF JUBILEE 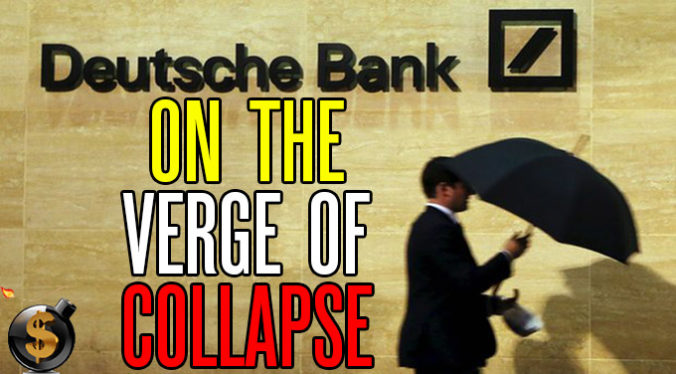 DEUTSCHE BANK HANGS BY A THREAD ON EVE OF JUBILEE

Nearly a year ago to the day, on September 28th, we wrote “Will Deutsche Bank Be This Cycle’s Lehman Brothers?”

In it we asked, “In 2008, the financial crisis was set-off by the collapse of Lehman Brothers.  Could this year’s crisis be caused by a collapse of Deutsche Bank?”

The day after the end day of the Shemitah in 2015, on September 14th, Deutsche Bank announced that it was laying off 23,000 employees, about 25% of its workforce.

At the time, it was trading around $26 per share.

Now, on the eve of the end of the Jubilee Year, Deutsche Bank was down another 7% on Thursday and is now at an all-time low near $11.50.

Bloomberg reported today that about 10 hedge funds that do business with the German lender have moved to reduce their financial exposure.

The International Monetary Fund in June said Deutsche Bank may be the biggest contributor to risk among so-called global systemically important banks. The bank has gross notional derivatives exposure of 46 trillion euros, according to an Investor Relations presentation published this month.

If Deutsche Bank existed in a bubble, its collapse would not be a major event.  After its shares have plummeted more than 50% in the last year, and down over 90% since 2008, Deutsche Bank only has a total market capitalization of $15 billion.

The problem exists in its massive derivatives exposure and the fact that most European trading is cleared through Deutsche Bank.

In other words, it, alone, has the capability to take down the entire worldwide financial system… and as we head into Friday, many are wondering if it will make it through to the weekend.

Many are expecting that if worst comes to worst, the German government will bail out Deutsche Bank.  But most of them are naive to the fact that this is a planned implosion of the economy and  financial system, one in which Merkel has played a key role.

Will Deutsche Bank implode Friday, two days before the end of the Jubilee Year?  Or perhaps over the weekend?  Interestingly, Monday is a national holiday in Germany, “German Unity Day”, and as we have pointed out in the past, most bank holidays/closures are instituted over a weekend.

The timing of Deutsche Bank potentially collapsing during the Jubilee end-day weekend and our call of Deutsche Bank being this cycle’s Lehman Brothers, may all prove to come true… and we predicted it all, down to the name and date!

Will it collapse over the weekend?  Only time will tell.  If it doesn’t, it is on its very last legs now.  Something’s about to break very quickly.

Tomorrow we will write about a bizarre and amazing confluence of events that are all set to happen this weekend which, simply, cannot all be coincidence.

In the meantime, our good friend, Max Wright, has offered a special, emergency set of online conference calls to help get you the information you need before it is too late.  You can access it immediately here.

And, subscribe to our newsletter (click here for more) to get immediate access to all our back issues, in addition to our upcoming issue coming out this weekend, as well as access to our worldwide group of subscribers to find out what you need to do in the event that Deutsche Bank sets off a financial crisis this weekend.

We’ve warned to prepare.  And we even warned of this specific weekend to be a key weekend in the upcoming chaos and crisis.

If you have been waiting to see if we are right before acting you will find out that once this crisis begins it will be too late to prepare… act now!