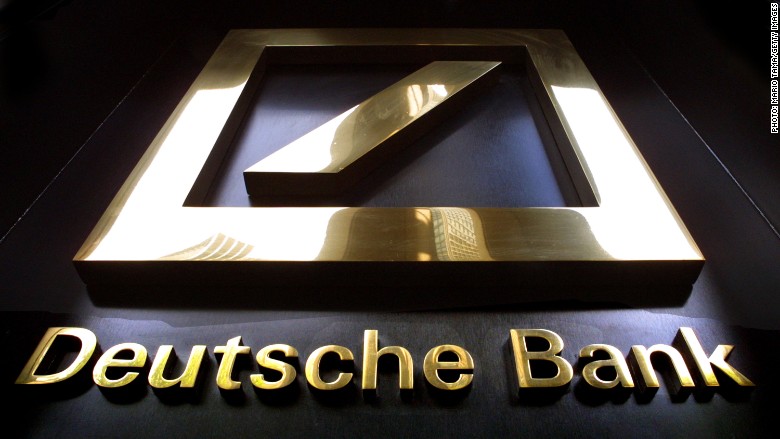 As I have been warning for five years, Deutsche Bank is now meeting it’s fate.

“German government officials are dismayed by the leaking of a U.S. Justice Departmentdemand that Deutsche Bank pay $14 billion to settle claims arising from sales of mortgage-backed securities during the financial crisis.” – Source

As I have repeatedly warned, “Deutsche is the biggest bank in Germany, and Germany is the largest and strongest economy in Europe, so the consequences of any major damage (or cumulative smaller damaging events) to DB would very likely cascade throughout the Euro-Zone, with terminal results.   Also of interest is that, because DB has such a large footprint in the US real-estate markets (both residential and commercial), the terminal results would be felt here in the US without much delay…By this mechanism, any ‘restructuring’ (i.e. Default) of Deutsche Bank would likely trigger another major round of real-estate devaluation all across the US.“

“The reality is quite stark: Deutsche will, quite probably, be the trowel by which we unearth the rest of the fraud and mis-valuation in our own (American) real-estate sector… I believe it is only a matter of time before this happens, and see DB as the probable trigger.” As I stated Here.

“At the risk of sounding hackneyed, I present the observation that, “we have seen these things before”.  Both WW-I and WW-II were fomented in periods of economic difficulty, and in both cases, war was preceded by economic aggression where currencies, tariffs, and preferential trade treaties were the first weapons used.  If the Euro-Zone collapses into a frustrated collection of nation-states practicing individual protectionism, then we will most assuredly see war again on the continent within a decade, if not much sooner.”  And, “America, and the rest of the world, are presently at great risk as a result of all this…the precipitous risk of Europe substantially limits our economic maneuverability at present, and; perhaps even worse, the Euro-drama is a powerful distraction across the worlds’ markets, artificially inflating American bonds and US-denominated Equities, resulting in a false sense of security regarding the US’s own sovereign and market risks, which are far larger than all of Europe’s’, combined.”  Here.

I’m not much for saying “I told you so”, but the day of reckoning has arrived. By spring, Europe will be deeply inundated by the twin disasters of a currency collapse and a surging wave of violent jihad, the likes of which Europe has not seen in over 600 years.

And why do I bring up jihad every time I mention Deutsche Bank?  Because the two are intimately linked.  Deutsche Bank is as powerful in Germany as the FED is in the US – and they are fully aware that as the money pinch gets tighter and tighter, all those muslim “refugees” will riot and murder in the streets.  This will be the TERMINAL POINT for the German banking sector – the banks will close all their retail offices, and all but cease servicing their retail customers, and blame it all on “dangerous conditions” caused by the muslims.

This will be the “Freeze Point” at which all the non-privileged investors and account holders will get the CYPRUS TREATMENT (and even more interestingly, Here) – Frozen assets, limited access to cash, and a massive haircut (I’m projecting a 65~80% loss for a German in the 40+ age range who has a retirement account of any substantial size).

But why does DB want the jihadis in every German city?  Because they are ready-made scapegoat for the shutdown of all retail banking, and because fear of the jihadis will prevent regular Germans from taking to the streets – as they otherwise most certainly would – to protest against the bank and the German government for taking them down this road to destruction.
Essentially, the muslims will do for Deutsche Band and the German government what their own Politzei would never do – threaten and abuse the German people with such force and scope as to force them all to cower indoors while they are looted, for fear of being raped and murdered by the muslim invaders in the streets of every city and towne.

That is the purpose of the muslims – they are a free ‘blocking force’ to circumvent any large-scale public response from the German people.

And if you think that the United States is not slated to meet the same fate, I would urge you to reconsider, although here in the US the blocking forces will be a muddy coalition of BlackLiesMatter, LaRaza, Islamic Jihaddis, and whoever else has an urge to murder, loot, and burn crap in the streets.

WE HAVE BEEN WARNED

LT
~Those who abuse Liberty, sentence themselves to death!