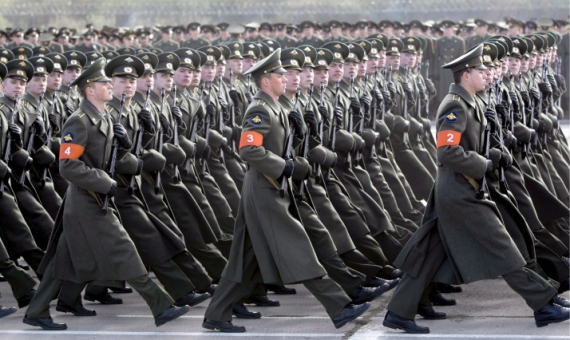 On Monday, August 29, we reported that Russia had mobilized Reserve Army Troops for the first time since the 1968 invasion of Czechoslovakia. Today, Tuesday August 30, we have found that the total mobilization is actually 80 mobilization brigades. About 10 tank brigades, 30 motor rifle brigades, 20 artillery and 20 other support brigades. So about 300,000 men. Our original story appears HERE.

SuperStation95 has reached out to our contacts in the Pentagon, The Intelligence Community and the State Department and the answers we’re getting are very serious.

According to the Pentagon, there has never been a mobilization like this in Russia before. The shear size of it is described by seasoned Pentagon officials as “staggering!” According to two separate sources in the Intelligence Community, various intel sources indicate the Russians intend to take action – but they are not certain if that action will be in Ukraine, Syria or . . . Turkey. The fear is that the size of this mobilization may mean “all of the above.”

Our source in the Pentagon put it this way:

Russia has also mobilized divisions of the National Guard, and the NAF is mobilizing its reserves to go from 35,000 men to 95,000.

Russia has assured this will be a coalition war by sending its CSTO allies to the Belarussian-Polish border. So that includes units from Russia, Belarus, Kazakhstan, Armenia, Tajikistan and Kyrgyzstan.

When you count it all up, Russia and allies now have something like half a million men on alert opposite Ukraine, the Baltics and Poland.

Let’s recap a little as to how things got so bad.

In Ukraine, the lawfully and democratically elected President, Yanukovich, was overthrown after tens of thousands of Ukraine citizens protested – often violently – for months. It turned out that it was the United States and its NATO allies who bankrolled the protesters, to the tune of five Billion dollars! This was proven when Russian intelligence tapped a phone call between Deputy Secretary of State Victoria Nuland and her staff in the US State Department. Recordings of that conversation were made public by Russia and contained the infamous comment by Nuland “Fuck Europe.”

When the former Soviet Union disintegrated in 1991, Russia sought — and was given — a guarantee by the US: NATO would “not move even one inch east” toward Russia. That promise, by then Secretary of State James Baker, turned out to be totally false. In a short time span, the former Soviet states of Estonia, Latvia and Lithuania applied for membership in NATO and it was granted. Next came Poland and Romania. Granted.

Left in all this change was Ukraine . . . until the west moved to overthrow that government.

This overthrow was intolerable by the Russians. For years, Moscow watched as NATO not only moved one-inch further east, but made giant leaps and was now positioning troops and armor along Russia’s western Border. When the Ukraine government was overthrown, Russia took action.

They began by moving about twenty thousand troops to their Black Sea Naval Fleet base in southern Ukraine; a peninsula called Crimea. Within days, those troops moved out into Crimea and annexed the peninsula. They claimed that Crimea was once part of Russia — it was — but was given to Ukraine by Kruschev. They also claimed that ethnic Russians inside Crimea were being discriminated against by Kiev and they wanted to return to being part of Russia. A Referendum was held and more than 80% of the voters in Crimea voted to return to Russia.

The US and NATO countries claimed the referendum was fraught with fraud and will not recognize the movement of Crimea back into Russia. The US and NATO imposed economic sanctions upon Russia until Crimea is given back to Ukraine. Russia has made clear, Crimea is now a permanent part of Russia and it is not going anywhere.

After Crimea was annexed, Ethnic Russians in eastern Ukraine, near Donbas and Luhansk, reported they were being “ethnically cleansed” by the Kiev government. They called to Russia for help. Shortly thereafter, “little green men” in brand new, UNMARKED army uniforms, armed with state of the art weapons systems including tanks, missile launchers and the like, began appearing in eastern Ukraine and forcing the Ukraine authorities OUT. Thus began a proxy war in eastern Ukraine between Russia and Ukraine/US/NATO. But the US and NATO have to move cautiously because Ukraine is NOT a member of NATO.

The Ethnic Russians in eastern Ukraine have made great strides and fighting in that part of Ukraine tends to be fierce. The fighting has now gone on for a couple years, and given developments around the world, it appears that this fight will be brought to a violent conclusion by a massive Russian invasion.

Intel analysts believe the invasion will take place in September, after the G-20 Summit in China. They also know that the Russians can move with so much power, so many troops and so much armor, that Ukraine would fall within days . . . with NATO utterly powerless to do anything about it.

In the interim, Syria has been faced with US (and NATO) backed “rebels” trying to overthrow its democratically elected President, Bashar Assad. The trouble began with a memo written by then-Secretary of State, Hillary Clinton, who wrote that Assad needed to be overthrown “to help Israel.” In fact, it was Assad’s refusal to allow a gas pipeline from Qatar to traverse Syria to supply Europe with natural gas, that actually caused the trouble.

Syria is — and has always been — an ally of Russia. Europe does not like being so dependent upon Russian gas supplies, so the Arabs in Qatar agreed to run a huge gas pipeline from Qatar through several countries, including Syria, then on to Europe. But Assad in Syria knew this would harm Russia, so he refused the pipeline. That’s when a whole slew of “Friends of Syria” started calling Assad a “brutal dictator” and also began arming “rebels” to overthrow him.

When things got bad for Syria, Assad pleaded with Russia for military assistance, and Russia agreed. The Russians made incredible strikes throughout Syria, clobbering both ISIS Terrorists and US-Backed Rebels. This did not sit well with US and NATO ally, Turkey, which was caught accepting stolen oil from ISIS, and supplying ISIS with weapons to overthrow Assad! So Turkey asked Russia to stop attacking the rebels and Russia refused. Turkey then shot down a Russian Fighter jet. Big mistake.

Turkey then made moves to get back into the good graces of Russia, which lead to an alleged Military Coup attempt to overthrow Turkish President Erdogan. The Turkish president was quick to blame the United States for the attempted Coup and relations between the US and Turkey got so bad, so fast, that the US had to remove its 50-80 nuclear weapons from Turkey’s Incirlik air base because the US no longer trusts Turkey.

Throughout these affairs, Turkey has pushed to introduce its ground troops into Syria under the guise of “fighting ISIS.” But since everyone now knows that ISIS is pals with Turkey, and that Turkey supports ISIS, it is clear to everyone who pays attention, that Turkey’s real goal is to assist ISIS and overthrow Bashar Assad of Syria to get the Qatar pipeline built.

Prior to Turkey sending in its troops, both the Syrian and Russian governments announced to the entire world “If any foreign troops enter Syria without the permission of the Syrian government, those troops will be attacked.” Turkey has now flatly ignored that warning and sent troops and tanks into northern Syria.

According to a source in the US State Department, negotiations between the US and Russia for resolution of “the Syria problem” have failed. With no Diplomatic solution in sight, the State Department is terrified that Russia is going to settle the Syria problem by force . . . by attacking and destroying the remaining Rebels (and ISIS) and by totally smashing the Turksh Army units inside Syria.

Turkey is a member of NATO and would likely try to invoke the NATO defense Treaty if their troops were attacked. But Turkey won;t be able to invoke that Treaty because Turkish troops illegally entered Syria! So it look as though Turkey is going to be left swinging in the breeze by NATO as Russia comes in and stomps them out of Syria.

In order for Russia to accomplish operations in both Ukraine and Syria, they would need about . . . two hundred thousand to three hundred thousand men. Exactly the numbers they have just mobilized.

See where this is going?

The 2016 G20 Hangzhou summit will be the eleventh G20 meeting. It is planned to be held on 4–5 September 2016 in the city of Hangzhou, Zhejiang. It is also the first ever G20 summit to be hosted in China and the second international summit after Xi Jinping succeeded the General Secretary of the Communist Party of China (China’s paramount leader) in 2012.

However, looming in the background of this important meeting is the ongoing trouble in the South China Sea. We have information that China may move militarily to seize Scarborough Shoal off the coast of the Philippines after the G-20 meeting because they believe the US will be too distracted by internal politics to respond. This would create a military conflict in the South China Sea. After September 5, look for an outbreak of hostilities.

World War 3. After the G-20 Meeting in China, this September. Watch for it.

Surprised? The US mass-media is the ONLY mass-media worldwide which is NOT covering all these developments. Everyone else around the world knows things are coming to a fight; it’s just folks in the USA being kept ignorant. Must be the Obama “transparency” at work.

Editor’s Comment: The complete incompetence of the Obama Administration in their mis-handling of foreign affairs is going to get a lot of us killed. Pray that things hold-off until after the Election. With a President Trump, honor will be restored to the US government and our government won’t be causing all this trouble around the world causing people to hate us.