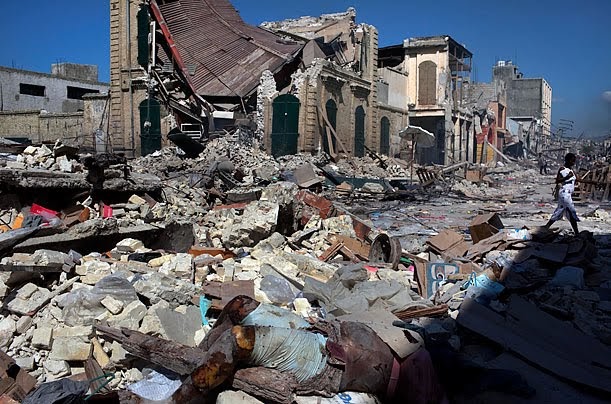 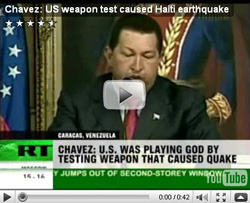 A devastating earthquake hit Haiti on 12 January killing over 200,000 people and laying waste to large parts of the country. In the aftermath, reports emerged that an “earthquake weapon” was unleashed to cause this catastrophic event.

Venezuelan leader Hugo Chavez was widely quoted as saying the US Navy initiated the Haiti earthquake with a tectonic weapon. The Venezuelan media reported that the earthquake “may be associated with the project called HAARP, a system that can generate violent and unexpected changes in climate,” Press TV reported on 21 January.

Venezuelan media “added that the US government’s HAARP program, an atmospheric research facility in Alaska, was also to blame for a Jan. 9 quake in Eureka, Calif., and may have been behind the 7.8-magnitude quake in China that killed nearly 90,000 people in 2008,” Fox News reported.

Chavez cited a report from Russia’s Northern Fleet. According to the report, the US Navy made a mistake with a secret “earthquake weapon” and the result was the Haitian earthquake.

Though the Russian Northern Fleets’ report was not confirmed by official sources, the comments attracted special attention in some US and Russian media outlets including Fox News and Russia Today. Russia Today’s report said that Moscow has also been accused of possessing and utilising such weapons.

“Speaking on his weekly television show, Chavez opined that the US mission in Haiti was a ruse to initiate military occupation,” the New York Daily News said. Information has also surfaced on the extent of oil fields recently discovered in Haiti (see sidebar ‘Haiti, Oil, and US Occupation’).

Other speculation contends that the cataclysmic “man-made” earthquake in Haiti is only a test run for the much bigger game: the coming showdown with Iran.

Trying to Trigger an Earthquake

In 1997, former US Defense Secretary William Cohen made the following statement:

Others [terrorists] are engaging even in an eco-type of terrorism whereby they can alter the climate, set off earthquakes, volcanoes remotely through the use of electromagnetic waves…

In 1966, Professor Gordon J.F. MacDonald, associate director of the Institute of Geophysics and Planetary Physics at the University of California, was a member of the President’s Science Advisory Committee. MacDonald published papers on the use of environmental-control technologies for military purposes, including “earthquake engineering” (he also wrote about weather manipulation, climate modification, polar ice cap melting or destabilisation, and ozone depletion techniques).

“The revealed secrets surprised legislators,” writes Dr. Nick Begich, author of the groundbreaking exposeAngels Don’t Play This HAARP. “Would an inquiry into the state of the art of electromagnetic manipulation surprise lawmakers today? They may find out that technologies developed out of the HAARP experiments in Alaska could deliver on Gordon MacDonald’s vision because leading-edge scientists are describing global weather as not only air pressure and thermal systems, but also as an electrical system.”

HAARP is a military project conducting cutting-edge experiments in ionospheric measurement, communication, enhancement and, according to some “conspiracy theorists,” weaponisation.

HAARP critics explain that the facility is capable of manipulating the ionosphere, at best causing artificial light shows on par with Alaska’s aurora borealis and, at worst, flooding Earth with electromagnetic waves that can do everything from disrupting satellites and missiles to creating earthquakes and modifying weather patterns.

Of course, there is no direct evidence the Pentagon used HAARP to touch off the massive earthquake in Haiti.

In 1975, the Soviet Union embarked on new research in the field of Magnetohydrodynamics for the purpose of studying the Earth’s crust and be able to anticipate earthquakes. The Soviets examined the possibility of provoking small quakes in order to forestall a big one. This research was quickly militarised and resulted in the construction of Pamir, the ‘earthquake machine’.

French author Thierry Meyssan writes that in 1995, “when Russia was governed by Boris Yeltsin and oligarch Viktor Chernomyrdin, the US Air Force recruited the researchers working at their Nizhny Novgorod laboratory. They built a much more powerful machine, Pamir 3, that was tested successfully. At that point, the Pentagon bought the men together with the materiel and shipped them to the United States, where they were incorporated into the HAARP programme.”

“The Earthquake Machine,” a documentary that recently aired on French television, suggests a few instances where a seismic weapon may have been employed, especially in Algeria and Turkey.

The documentary focuses on the 12 May 2008 earthquake in Sichuan (China). During the 30 minutes that preceded the earthquake, inhabitants of the region observed atypical colours in the sky. The suggestion being that the same energy used to provoke the earthquake is also likely to have perturbed the ionosphere.

During the Second World War, a group of New Zealand researchers attempted to develop a device capable of provoking tsunamis that could be unleashed against Japan. The research work was conducted by Thomas Leech, an Australian national, at Auckland University behind the code name of “Project Seal.” Several small-scale test explosions were carried out successfully, between 1944 and 1945, at Whangaparaoa off the coast of Auckland.

The United States deemed this programme to be as equally promising as the “Manhattan Project,” involving the development of the atomic bomb.

At the time, Project Seal was a military secret and it was therefore not disclosed that Thomas Leech had in fact been awarded the rank of Knight of the British Empire for concocting the “tsunami bomb.”

Subsequently, the US intelligence services covered it up by claiming that the research had never really existed and that the whole thing had been an artifice to impress the Soviets. However, the authenticity of Leech’s tests was established in 1999 when the New Zealand Ministry of Foreign Affairs declassified part of the documentation.

It is not known whether the research continued during the 60’s, but it was resumed by force of circumstances when atmospheric nuclear tests were abandoned in favour of sub-marine tests. According to Meyssan, “the United States were afraid of provoking earthquakes and tsunamis unintentionally. They preferred to learn how to do it intentionally.”

Officially, at the end of the Vietnam War, the United States and the Soviet Union gave up environmental wars (earthquakes, tsunamis, environmental balance destabilisation, atmospheric modification of the climate, ocean currents, the ozone layer and the ionosphere) upon signing the 1976 “Convention on the Prohibition of Military or Any Other Hostile Use of Environmental Modification Techniques.”

The current scientific explanation for natural earthquakes is they are caused by the movement of tectonic plates over the Earth’s mantle. Sandwiched between Earth’s crust and molten outer core, the vast mantle accounts for 83 percent of the planet’s volume. It is filled with solid rock but, heated by the core and by its own radioactive decay, it circulates like a pot of impenetrable soup. That circulation is the driving force behind the surface motion of tectonic plates, which builds mountains and causes earthquakes.

The destructive power of an earthquake comes from the momentum gathered when two opposing “faults” or tectonic plates that may have been locked together for decades, suddenly move apart. The result is that solid rock which normally moves only with the passing of geological ages accelerates briefly to 8000 kmh, unleashing huge quantities of energy and creating a shaking movement of up to a metre a second.

Officially, there is an area of research devoted to man-made earthquakes. Geologists and seismologists agree earthquakes can be induced in five major ways: fluid injection into the Earth, fluid extraction from the Earth, mining or quarrying, nuclear testing, and through the construction of dams and reservoirs.

A New York Times report confirmed drilling for oil sets off earthquakes and detailed how a drilling project near San Francisco and a similar project in Basel, Switzerland were shut down over concerns they triggered damaging earthquakes. Both diggings involved fracturing hard rock more than two miles deep.

…large earthquakes tend to originate at great depths, breaking rock that far down carries more serious risk, seismologists say. Seismologists have long known that human activities can trigger quakes, but they say the science is not developed enough to say for certain what will or will not set off a major temblor [Spanish word meaning ‘a trembling, earthquake’].

To hypothetically create an earthquake on purpose (or defuse one), tunnels would be drilled underground and stress measurements taken of rock displacement. This could be achieved by robots. Combining geophysical theory and computer models, researchers theoretically could determine the position where plates are locked. It would then be a matter of detonating explosives on that spot to trigger the earthquake. Conversely, a quake could be defused by detonating a number of nearby spots in succession, to slowly release the stress while hopefully causing only minor quakes.

The revolutionary accomplishments of visionary scientist Nikola Tesla in the fields of electricity and magnetism paved the way for everything from wireless communication and power to robotics, ballistics, nuclear physics and much more, including telegeodynamics.

An article from the 11 July 1935 issue of the New York American entitled ‘Tesla’s Controlled Earthquakes’, stated Tesla’s “experiments in transmitting mechanical vibrations through the Earth – called by him ‘the art of telegeodynamics’ – were roughly described by the scientists as a sort of controlled earthquake.”

“It becomes possible to convey mechanical effects to the greatest terrestrial distances and produce all kinds of unique effects of inestimable value to science, industry and the arts,” Tesla explained to reporters at his 79th birthday gathering in 1935 at the Hotel New Yorker.

The January 1978 edition of Specula magazine ran an article describing an incredibly profound phenomenon that could be produced within the Earth by what is called the ‘Tesla Effect’.

In other words, “much more energy is now present in the standing wave than the… amount being fed in from the Earth’s surface.” By interferometer techniques, giant standing waves can be combined to produce a focused beam of very great energy. This can then be used to produce earthquakes induced at distant aiming points.

Tesla expressed grave concerns about the effects of this technology because it is exactly the type of thing that could easily get out of control once it begins vibrating within the Earth – it could possibly cause the Earth to vibrate to pieces.

Two days after Tesla died in 1943, the US government confiscated all of his papers, and the FBI declared them classified until further notice. That notice still stands.

“Tesla was the mad genius, equal parts madness and genius,” says journalist and author Tom McNichol. “Whenever anyone comes up with a superweapon, they usually say it is inspired by him. And though he was interested in beam weapons, telegeodynamics, death rays and more, he died almost penniless. But never rule anything out. I bet you when one of these weapons comes to fruition, Tesla’s hand will be in there somewhere.”

The existence of an “earthquake weapon” remains in the domain of “conspiracy theory,” but it’s a story that won’t go away.

Technological breakthroughs are closely guarded military-industrial secrets. It is said the general populace has access to technology at least 10 years behind advancements made in secret laboratories around the world. Due to the power and money involved, governments and private corporations go to extraordinary lengths to maintain that veil of secrecy.

The emerging multipolar world is clearly a threat to those nations used to making the rules and wielding power. Are the same people who gave the world atomic weapons – and are now planning space wars – in possession of an earthquake weapon? A new weapon for continued dominance. Even the threat of its possible existence is a psychological weapon.

For now, the possibility resides in fringe science. But fringe science has a way of coming true – ask anyone who has experienced Raytheon’s pain ray (thanks, Tesla!) or worked alongside an armed robot in Iraq. If the 20th century has taught us anything, it’s that science is only limited by our imagination. Unfortunately, some segments of humanity like to imagine seriously deadly weapons.