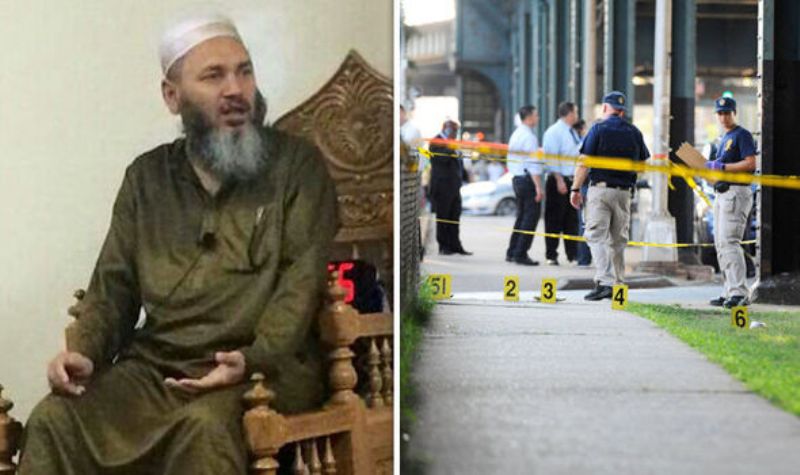 …from a perfectly planned assassination of a Muslim imam in New York City?

SOTN Editor’s Note:
It ought to be very clear by now that the Clinton Campaign, Democratic Party and Mainstream Media are colluding in every way possible to derail Donald Trump.  All three have shown that they will do anything to ensure a Clinton victory.

Theft, fraud and murder are all a part of their game plan to steal this election.  Hence, it came as no surprise when an Imam and his assistant were shot down for no apparent reason.  They even had the crime scene set up so well that the right shills were right on site to misdirect the ultimate blame to Trump.

This crowd of Democratic election thieves is as reckless as they are shameless in their drive to guarantee a Clinton win.  Yes, they will do anything, and do it without conscience, as the crimes just seem to pile up by the day.  They predictably commit the crimes; and then Trump takes the blame.  And, yet, all the while they relentlessly point to The Donald who is just trying to run a decent and truth-telling campaign.

Isn’t that exactly where all his problems really began?  There is no longer any place for the truth in the American political process.  Any truth speaker is shot down in a New York minute. Incidentally, was this particular Imam in support of a Trump candidacy?

N.B. The article posted below well explains where this false flag assassination is going in the media.  Just watch the talking heads fulminate and pontificate on how Donald Trump is to blame for a cold-blooded murder that the masters of the MSM themselves ordered. Isn’t that how it always works: accusing the innocent of heinous crimes that the NWO ruling elites are actually guilty of?!

A lone gunman opened fire on a Queens’ imam and his assistant as the two walked (near Ozone Park mosque in New York) after Saturday afternoon prayers, leaving one dead and the other critically wounded.

As NY Daily News reports, dozens of angry Muslim men gathered at the murder scene, with one exclaiming “That’s not what America is about…we blame Donald Trump for this… Trump and his drama have created Islamophobia.”

The gunshots rang out near the Al-Furqan Jame Masjid Mosque in Ozone Park, leaving both men lying on the ground in their own blood just a block from the house of worship, according to witnesses.

Witnesses described a chaotic scene where the shooter started firing at the two unarmed victims in the middle of a blistering August afternoon.

“We are devastated,” said Kobir Chowdhury, president of a second neighborhood mosque. “We need to get to the bottom of this. We need to know if they did this just because of our religion.”

Another witness said the gunfire seemingly came from nowhere.

“All of a sudden I heard five shots,” said the witness, who declined to give his name. “I knew it wasn’t firecrackers. And then the commotion of the emergency (vehicles), and that’s when I knew.

“When I came here, they were doing CPR to both of the people on the ground.”

Dozens of angry Muslim men gathered at the murder scene, making it clear they believed the shooting was a hate crime — with the two religious leaders specifically targeted.

“That’s not what America is about,” said local resident Khairul Islam, 33.

“We blame Donald Trump for this … Trump and his drama has created Islamophobia.”

And with that, the narrative is set for tomorrow’s political talk-shows.