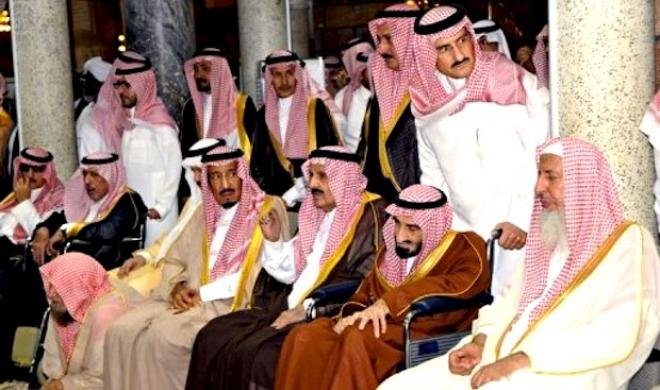 Five of the sons of king Abdul Aziz, the founder of Saudi Arabia 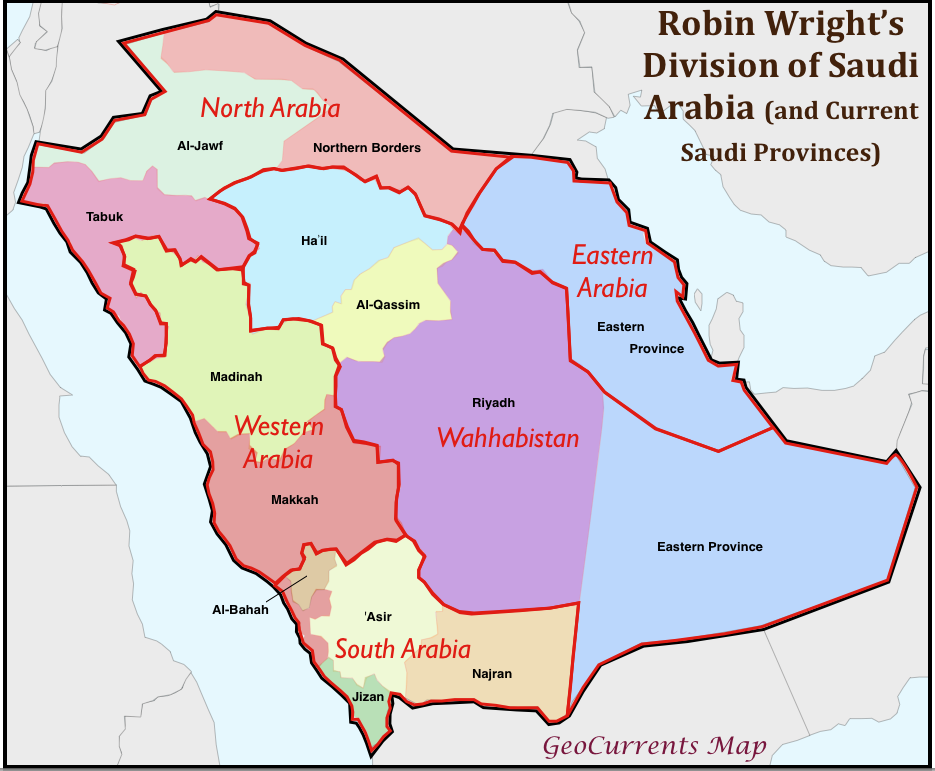 An excerpt from, “What If Saudi Arabia Collapses?” By Theodore Karasik and Joseph Cozza, LobeLog, August 10, 2016:

The collapse of the Saudi state would have grave implications for the region and the world. As illustrated by Libya, Syria, and Yemen, state collapse creates a vacuum for radical jihadist groups to claim new territory. Currently, al-Qaeda in the Arabian Peninsula (AQAP) is pushing against the Saudi border with Yemen and the Islamic State (ISIS or IS) in Iraq and Syria poses a constant threat to the kingdom’s north. Thus, civil war, instability, and high levels of sectarian tension would likely be fertile ground for these groups to grow and expand their control, threaten the holy sites, and perpetuate regional instability. Washington’s national security establishment has expressed concerns about turmoil escalating in Saudi Arabia if MBS’s reform agenda fails to achieve its objectives. Some see the kingdom at a crossroads and fear that the kingdom’s collapse would benefit the Islamic State. Regarding MBS possibly becoming the next king, one anonymous Saudi expert told NBC News, “It’s him or it’s ISIS.”

The July 4 attacks in three Saudi cities (Medina, Jeddah, and Qatif) underscored the significance of the militant Salafist-Jihadist threat not only to the country’s security but also Al Saud’s prestige and Islamic legitimacy as the Custodian of the Two Holy Mosques. The intended attack by IS adherents on the Prophet’s Mosque during the end of Ramadan signals the Islamic State’s intent to usurp the Al Saud much as the apocalyptic leader Juhayman al-Otaybi did when he seized the Grand Mosque in 1979. “This attack has made it very clear that ISIS does not seem to believe in any moral red lines whatsoever,” said Fahad Nazer, a leading expert on Saudi Arabia. “Even al-Qaeda, which is certainly brutal in its own right, has never targeted Muslims in their houses of worship. ISIS has done that repeatedly.”

A civil war in the Arabian Peninsula would also challenge long-standing alliances. Instability, the threat to the holy cities, and the possibility of jihadist gains would encourage states with high stakes (Egypt, Jordan, Iran, Pakistan, U.S., etc.) to react. In fact, UAE officials have even made contingency plans for a potential state collapse in Saudi Arabia, a risk which none of the kingdom’s neighbors can afford to ignore. These states would certainly move to secure the holy sites and combat terror cells, but solving the civil war would be a massive challenge. There would be considerable pressure to support the Saud family, but supporting the Wahhabi religious establishment over a reform movement would cause domestic complications in some of these countries that resent the kingdom’s influence across the region.
.
.
Finally, Saudi Arabia as a failed state would send international markets into free fall. State collapse in Saudi Arabia would halt oil production, significantly increasing the price of oil and dramatically weakening global economies. Such an increase would spark a severe global economic crisis. The longer Saudi Arabia is destabilized, the more difficult it would be for the world to pull out of the crisis and recover. The socio-political ramifications of such an economic shock could be catastrophic and disastrous for both the region and the world. If the government faces large-scale demonstrations calling for social and political liberalization while facing tribal, familial, and religious elite abandonment, the result could be instability, civil war, and/or state collapse.

An excerpt from, “The Collapse of Saudi Arabia and the Cataclysmic Power Shift in the Middle East” By Elihugh M. Abner, Journal of International Affairs, June 5, 2016:

The consolidation of the Shia Belt and the destabilization of Saudi Arabia will have one of two outcomes for the Islamic State of Iraq and Syria (ISIS). In the first, it will be inevitably destroyed by the Syrian army, who will be bolstered by an increase in Russian and Iranian forces in the theater. With U.S. and Western attention being drawn towards a destabilized Saudi Arabia, the Russian Federation as well as Iran will be able to increase military operations within Syria, increasing the likelihood that Assad will remain in power and both ISIS and the Free Syrian Army will be crushed.

The second scenario would be the rise of radical Salafism in a destabilized Saudi Arabia. With Wahhabism being one of the most popular forms of Sunni Islam in Saudi Arabia, it would seem only logical as this would be the immediate threat in the Kingdom. ISIS would undoubtedly take advantage of the destabilization of Saudi Arabia in the same manner as in Syria, Iraq, and Libya. As radical Salafism is the widely practiced form of Sunni Islam in both al-Qaeda and ISIS, it would only be a matter of time before the two powers took a more active role in the country.

The fall of Saudi Arabia would bring about a colossal shift of power in the Middle East and Europe. It would mean the establishment of the “Shia Belt” stretching from Syria to Iran, and the possibility of an Iranian-backed government in Oman. Bashar al-Assad would remain in power in Syria and Russia would be able to establish a larger, more permanent military presence within the region. Demands in Europe for oil would enable Putin to hold more leverage over the European Union, and in particular the Eastern European states, who already depend on Russian oil. Being an opportunist whose overarching goal is to reestablish the Soviet Empire, Putin would undoubtedly take advantage of the seeming weakness in the European Union and would exert his influence, economically or militarily, over Eastern Europe.

An excerpt from, “Towards the collapse of Saudi Arabia” By Thierry Meyssan, Voltaire Network, January 11, 2016:

The fall of the House of Saud may be provoked by a reduction in the price of oil. Incapable of reforming its life-style, the kingdom is borrowing hand over fist, to the point that according to financial analysts, it will probably collapse within two years. The partial sale of Aramco may temporarily postpone its demise, but this will only be possible at the cost of a loss of autonomy.

The decapitation of Sheikh al-Nimr will have been the straw that broke the camel’s back. The fall of Saudi Arabia is now inevitable because there is no hope left for the people who live there. The country will be plunged into a mixture of tribal revolts and social revolutions which will be far more murderous than the previous Middle-Eastern conflicts.

Far from acting to prevent this tragic end, the US protectors of the kingdom are awaiting it with impatience. They continually praise Prince Mohammed’s « wisdom », as if encouraging him to make even more mistakes. Already in September 2001, the US Committee of the Chiefs of Staff were working on a map for the re-modelling of the « wider Middle East », which planned for the separation of the country into five states. In July 2002, Washington was considering ways of getting rid of the Saud family, during a famous session of the Defense Policy Board. From now on, it’s just a matter of time.

An excerpt from, “The Coming Collapse Of Saudi Arabia” By Nick Giambruno, Zero Hedge, March 10, 2016:

The Saudis are also losing billions underwriting foolhardy wars in Yemen and Syria.

The Saudis thought they could support armed Syrian rebels and topple the Assad government in a matter of months. They figured Assad would fall just as easily as Gadhafi did in Libya in 2011. It was a gross miscalculation.

The Saudis launched the war in March 2015. They wanted to reinstate a Saudi-friendly government. The Saudis thought the intervention would last a few months, then they’d declare “mission accomplished” and go home. That’s not what happened.

The political and economic stars are aligning against the Saudis. It’s their most vulnerable moment since the kingdom was founded in 1932.

An excerpt from, “Start Preparing for the Collapse of the Saudi Kingdom” By Sarah Chayes And Alex de Waal, Defense One, February 16, 2016:

For half a century, the Kingdom of Saudi Arabia has been the linchpin of U.S. Mideast policy. A guaranteed supply of oil has bought a guaranteed supply of security. Ignoring autocratic practices and the export of Wahhabi extremism, Washington stubbornly dubs its ally “moderate.” So tight is the trust that U.S.special operators dip into Saudi petrodollars as a counterterrorismslush fund without a second thought. In a sea of chaos, goes the refrain, the kingdom is one state that’s stable.

In fact, Saudi Arabia is no state at all. There are two ways to describe it: as a political enterprise with a clever but ultimately unsustainable business model, or so corrupt as to resemble in its functioning a vertically and horizontally integrated criminal organization. Either way, it can’t last.It’s past time U.S. decision-makers began planning for the collapse of the Saudi kingdom.