How Clinton And Her Shallow-Brained Media Do Trump’s Bidding 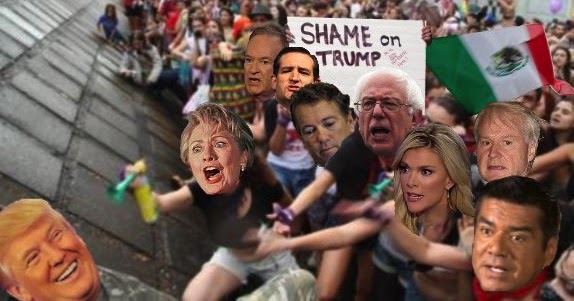 How Clinton And Her Shallow-Brained Media Do Trump’s Bidding

Clinton’s negative campaign against Trump, and the media leashed to her messages, are doing Trump a huge favor. Unless they can break away from their limited framework, stop their unintended advertising for Trump’s campaign, they will propel him to victory.

Here is an example: Networks on Trump: A ‘Dark Speech’ From a ‘Vengeful’ ‘Demagogue’ – Newsbuster

The three networks on Thursday night immediately derided Donald Trump’s “dark speech” as one coming from a “vengeful” “demagogue.”

(Isn’t it amazing how Putin can compel all U.S. media to parrot the very same message?)

Trump may well have painted a negative, “dark” picture of the state of the union. But the U.S. IS “dark” for many of Trump’s core followers as well as for many swing voters. Real wages are stagnant. While new unemployment numbers seem to go down, labor partition rates are very low and sinking. Many people who would like to have a job have given up looking for one. The former big industrial areas have been shrinking for decades. The foreign policy of the U.S. is one of wars and terrorism with no positive message at home or abroad.

The Clinton campaign gurus and their media surrogates took up the “dark” scheme to set Trump into a negative light. But Trump followers agree with the description. The Clinton message confirms their believes. The people agree with Trump’s “dark” diagnosis. Picking up on that and reinforcing it only reinforces his message.

When Trump describes the world as “dark”, he solely does so to sell THE LIGHT – himself:

“Your world is dark. Let me enlighten it. I am the only one who can do it.”

In June the Clinton campaign spent about $50 million on TV ads. Trump did not even spent a tenths of that and has better polling results than before. He has pulled nearly even to Clinton. Trump raises much less money than Clinton. He simply does not need as much as she does. He can spend more time on real campaigning than Clinton who must hurry from one fund raiser to the next one. Meanwhile Clinton’s negative campaigning against Trump reinforces his message.

That negative campaigning also does nothing to bring new voter for Clinton. People who like Trump will not switch to Clinton. People who do not like him will stay home or vote for a third party. Clinton fails to project an alternative to the usual beltway monotony. A same-as-ever program for an electorate that demands changes. Enthusiasm and voter turnout will decide the campaign. Michael Moore correctly anticipates that Clinton fails on both. Vicious attacks on Trump have no positive message and do not change that.

The current “Trump is like Putin” and “Putin wants Trump to win” campaigns misunderstand how Trump and his supporters think. They see Putin as a nationalist leader who defends the interests of his country. Someone straight with whom one can do business. Most Trump supporters see Putin as a positive example of a leader. A thug, maybe but one who gets things done.  Clinton’s Washington DC circus completely fails to recognize that.

Fred Hiatt’s Funny Pages©, aka the Washington Post Opinion pages, have for months run one anti-Trump piece after the other. This is just one regular day: The effect is essentially a marketing campaign FOR Trump. Not one day passes without two or three pieces with his name in big letters above it – branding that does not cost him a penny.

When one of Trum’ps children recently plagiarized parts of her convention speech, a New York Times journalist tweeted:

He doesn’t get it. That is not the level on which the Trump campaign works. Here is the recipe. The journos’ shallow-brained reaction is a main ingredient of it:

It works every time. Slip in a bit of plagiarizing and occupy the headlines. Hold a “dark” speech and let the Clinton campaign and her independent media make your point over and over again. Sell yourself as the solution to all the negatives they emphasize.

Whatever one might think of Trump – he IS a marketing genius. He knows exactly how the media tick and he makes them work for him without paying a penny.

The same encrusted, narrow and hardened view of omnidirectional belligerence which drives U.S. foreign policy is visible in the way Clinton and her media run the campaign. There is no room for diverging from the compulsory norm.

Trump breaks those structures and thrives. He uses the limits of mainstream framing against it. Like him or not, I don’t, there is a genius in that.