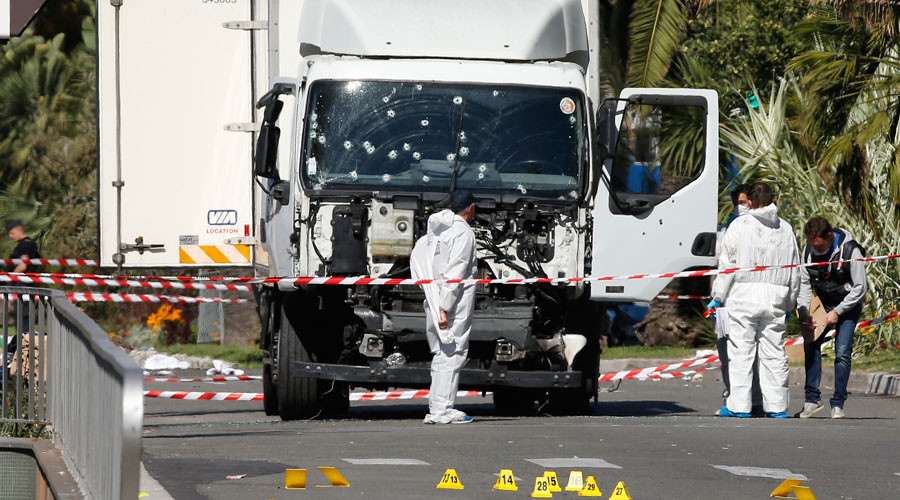 Investigators continue to work at the scene near the heavy truck that ran into a crowd at high speed killing scores who were celebrating the Bastille Day July 14 national holiday on the Promenade des Anglais in Nice, France, July 15, 2016. © Eric Gaillard / Reuters

Scores of people have been killed and dozens more injured after a truck plowed through a crowd during Bastille Day celebrations in Nice, in what has been called “the worst attack” in the city’s history. The truck driver was killed by police.

17:30 GMT
Most weapons the Nice attacker carried in his vehicle turned out to be replicas, French media reports, citing Paris Prosecutor Francois Molins. Police found a 7.65 caliber handgun and ammunition in the truck cabin. Other weapons, including another pistol, two assault rifles and grenades were replicas.

15:21 GMT
The Nice attacker’s identity has been confirmed as Mohamed Lahouaiej Bouhlel, Paris Prosecutor Francois Molins told journalists, adding that the truck driver’s identity was verified from his fingerprints.

15:11 GMT
Ten children and teenagers were killed in the terror attack in Nice, Prosecutor François Molins said in a briefing. Around 200 people were injured, 52 of whom are still in critical condition.

15:04 GMT
A cartoonist for the French satirical Charlie Hebdo weekly working under the pseudonym “Coco” has posted a caricature of the Nice terrorist attack on her twitter account, provoking a wave of public indignation, with many users leaving angry and mocking comments under the post.

14:55 GMT
The Eiffel Tower will be lit up in France’s national colors following the Nice attack, Paris City Hall announced, as reported by AFP.

14:52 GMT
International Monetary Fund Managing Director Christine Lagarde has expressed her condolences to the families of the victims of the Nice terrorist attack. “The terrible events that transpired in Nice left me with a sense of profound sadness. My thoughts and prayers are with the families and loved ones of the victims. I stand by you at this tragic moment,” she said in a statement published on Twitter.

Live from @brisbanecityqld : tonight the Story Bridge in Brisbane is waving the french colours #NiceAttentat pic.twitter.com/QMsBKzWQy6

Some 30,000 people were on the Promenade des Anglais on Thursday night when the attack took place, le Figaro newspaper reported.