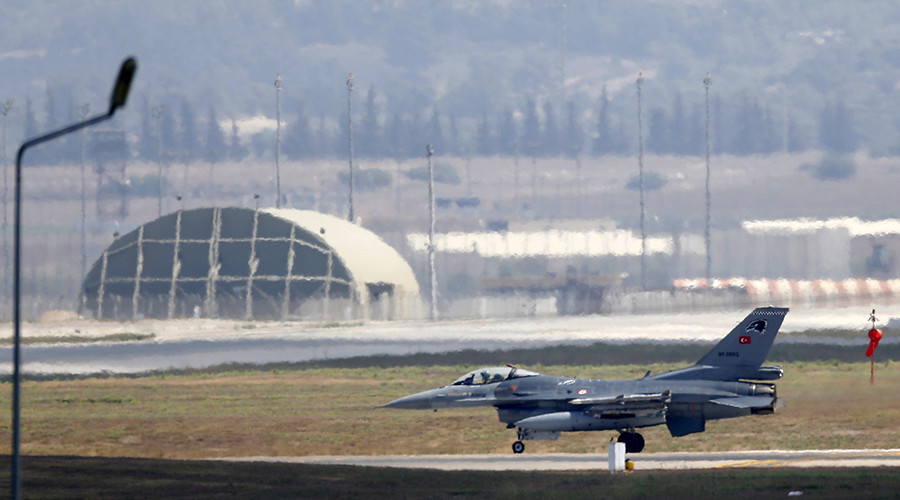 Movement in and out of the Incirlik airbase in southern Turkey has been closed by local military authorities, according to the US consulate. The NATO base stores US tactical nuclear weapons.

“Local authorities are denying movements on to and off of Incirlik Air Base. The power there has also been cut,” the US consulate in Adana said in amessage.

“Please avoid the air base until normal operations have been restored,” it added. No further details were provided.

According to CNN, airspace over the area has also been closed and power to the facility has been cut.

The closure of the airspace has reportedly led to a halt in US air strikes against Islamic State (IS, formerly ISIS/ISIL). CNN was told by sources that the Turkish authorities did make an exception for US aircraft that had already been deployed on missions before the airspace was shut and allowed them to land at the base.

The air space will be closed until Turkish authorities gain full control over the situation in the region following the coup attempt, Turkish officials told the US, adding that they want to make sure that all elements of the Turkish air force are under the control of pro-government forces, as some warplanes and helicopters were used by rebels overnight.

The Incirlik airbase is of critical importance to the US military, as not only does it facilitate the US’ aerial operations against terrorists in neighboring Syria and Iraq, but it is also one of six NATO sites in Europe that house tactical nuclear weapons. The exact number of tactical nuclear bombs at the base is classified, although some reports put it at 50.

A group within the Turkish military attempted to stage a coup on Friday night, using tanks and attack helicopters. The conspiracy failed, as they didn’t manage to capture any senior government officials and couldn’t win wide support from the Turkish military.

According to the Turkish Prime Minister, at least 265 people have been killed, including 104 pro-coup participants, while 1,440 people were injured in military action in Istanbul and Ankara overnight. Since the plot crumbled, 2,839 soldiers and officers involved in the coup attempt have been arrested.