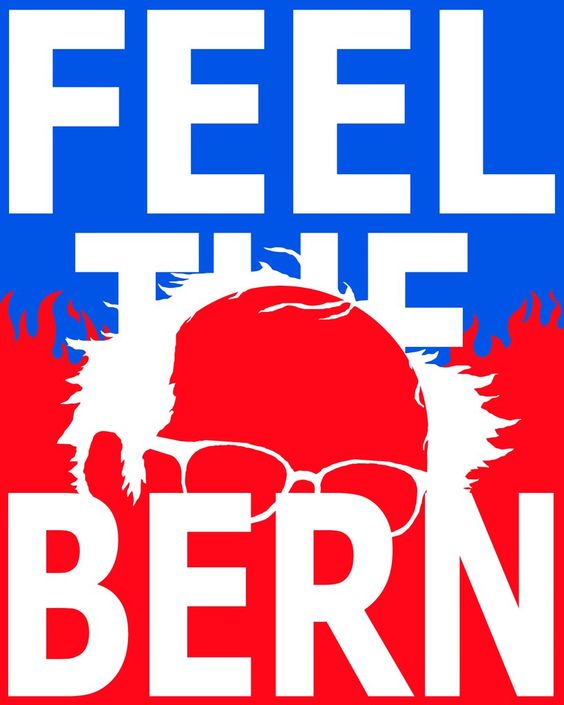 Not after you seriously Berned your campaign team and supporters. Boy, you talk about feelin’ the Bern!

Special Note:
The following headline just showed up in a major MSM outlet:
US elections: Sanders ‘to work with Clinton’ to beat Trump
What follows in this op-ed piece is a continuation of our opinion
that Bernie Sanders was never the real deal.
Is Bernie Sanders Merely The Pied Piper of the New World Order?
That he is all show and no reality.
Bernie Sanders Is A Fraud: All Show and No Substance
He even speaks and acts completely contrary to his own strong
campaign assertions and stated intentions.
Sanders: Nominating Clinton would be ‘disaster’ for party, nation

Sorry, Bernie, but you screwed up your campaign so many times by your failure to take on Clinton misconduct that you can no longer be trusted.  By going over to the other side so quickly you have really betrayed your whole team and millions of supporters.

First, you let Clinton get away with Emailgate and Servergate (these are two separate crime-sprees btw) by actually giving her a pass during your first debate.  Then you permit her and her thugs to sabotage your campaign process every step of the way by cheating and bullying their way to various primary wins.  Then you practically hand her the nomination after her questionable California win before any certified verification of vote totals.

Bernie, why should your people follow you over to the other side when your entire campaign only showed the Clinton camp conduct to be utterly untrustworthy and downright despicable?  Hence, you have no business meeting with Obama whose only aim is to see a Democrat president.  You’re an Independent, for God’s sake; why back incorrigible criminal Democrats?

Given that you would not even stand up for yourself when it was the most important to do so, why should anyone stand up for you, or stand by you.  Especially as you now segue over to the enemy camp, what good can possibly come out of such a glaring betrayal … … …
betrayal of your platform, your principles, your ethics, your politics.  Clearly, going over to the other side represents a profound violation of everything you stand for.

So why should anyone follow you?  Your flipping over to the enemy camp — enemy of the American people, mind you — is quite horrific at best, nefarious at worst.  Some of us are wondering if your campaign was just a sham to galvanize, and then corral, the progressives and liberals so that they could be conscripted to march right into the Clinton camp. Clinton had already lost many of them so perhaps you were just a setup to keep them all in the election game and going to the polls, yes?

Many of us sincerely hope that this is not true, but nothing else makes any sense.

Really, how do you just up and abandon your supporters in a day, and then proceed to join the NWO perpetual war party under Clinton?!?!  Something is very, VERY wrong here, Bernie.

Just in case you haven’t figured it out yet, your once loyal supporters will never follow you to Hillary’s side … NEVER!  A few may, but very few only.

Most of them will simply fail to show up at the polls for lack of a suitable candidate. Others, however, will march right over to the Trump campaign out of sheer vengeance for your betrayal.  You just walked away from so many pumped up fans and followers that many now feel they have no choice but to show you a thing or two.

Donald Trump may not be perfectly aligned with your principles or politics, but he didn’t blatantly cheat you out of a nomination.  He didn’t send thugs into your events to disrupt them or incessantly manipulate the primary process against you—state-by-state. Trump didn’t conspire with the DNC Chair to undermine your candidacy and sabotage your campaign at every turn.  Nor did he attempt to marginalize you within the party whenever you exhibited vulnerability.  Hillary Clinton did do all that … and much, much more that you aren’t even aware of.

In fact, if your ardent supporters and committed delegates really knew what they don’t know about how Hillary harpooned your campaign raft, they would do everything in their power to ensure she does NOT get elected.