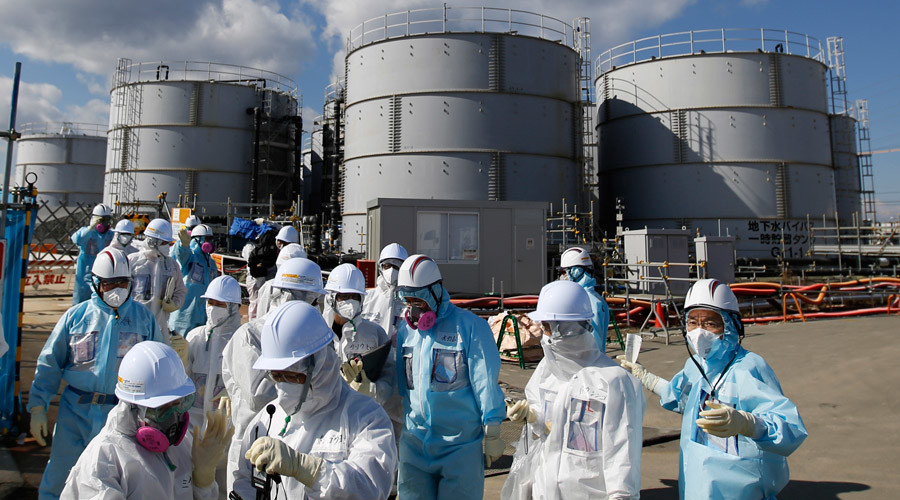 As retold in kabuki and old Japan’s puppet theater, justice is never delivered by the law courts, those being just instruments of the powerful. Given gross perversion of law, karma must then weigh heavier and so over time evil-doers get caught in the snares of their own making.

This truth from theater was affirmed by Brexit. The Japanese and American corporate criminals walked away unpunished from their melted-down Fukushima reactors to start up nuclear power projects in England and Wales. These culprits failed to realize their path of escape led into the steel jaws of a karmic trap, which was triggered by British voters’ decision to exit the European Union.

The Brexit shock triggered a steep drop of the British pound in the world forex market, while the yen sky-rocketed, blowing apart the best-laid plans of Bank of Japan officials to export their nuclear-powered economy out of debt. Based on their reckoning, a strong pound promised a huge return on investment in British energy when converted to a weak yen, effectively bailing out major Japanese banks underwater with bad loans at home. Due to this past week’s currency gyration, the bank loans to Hitachi and Toshiba operations in the UK will probably never be recovered.

The Japanese-American nuclear industry will no doubt lobby the British government for higher electricity tariffs on households and industry. For a Parliament under close scrutiny by voters of all parties, however, it will be politically impossible for energy regulators to triple household electricity rates to compensate foreign corporations for their lousy bet on a strong pound. The loss-making Toshiba, which controls Westinghouse, has already been facing serious fraud charges in Japan and the U.S., and so is now seeking $8 billion in loans from HSBC. Fat chance of that, not when the Fukushima fraudsters sailed into Britain on borrowed money on a ship of fools that’s struck the rock of Brexit.

Of course, Hitachi, Toshiba and even TEPCO, the latter involved in decommissioning Sellafield, will keep up the pretense that nothing has changed. Japanese investment in Britain has introduced the corporate culture of denial, monopolist greed, political corruption and media disinformation that prevails in Japanese super-expensive energy market, as exemplified by imports of Fukushima pre-cooked rice into the UK. One of the agents of criminal-culture transfer is the Japan-UK Nuclear Dialogue. “Deranged” is about the only way to describe a bilateral committee that wants to recruit young British women to work inside reactors buildings. Before plumbing the depths of that bilateral sewage, the bright side of Brexit deserves congratulations.

The majority of British voters deserve praise for seeing through the web of corporate-funded media lies about the agenda of the European Union, which is not a community in any charitable sense but a Trojan Horse for globablization. The denationalized British nuclear sector provides a clear example of undisguised favoritism for foreign investment from Japan, the U.S., France and Spain. The selling point to Britons is that foreign nuclear operators will create jobs. Most of that work, however, is during the construction phase.

Once operating, nuclear plants are capital intensive with few workers per megawatt output as compared with competing sources of electricity. Most of the profit accrues to foreign interests and is repatriated to banks like Mitsubishi-Tokyo, Sumitomo and Mizuho. While electricity tariffs are ratcheted up over the decades, harvesting an ever-larger share of monthly household income, much like how sheep are shorn in the springtime.

At last, Brexit has opened a new vista for sovereign energy development once the field is cleared of the Fukushima felons. The prospect for energy independence is emerging in this era of low worldwide oil-and-gas prices, along with the onset of more efficient renewables. The North Sea reserves contain an estimated 4.5 billion barrels of oil equivalent (probably a low figure), with more than half of it in natural gas. In contrast to highly centralized and capital-intensive nuclear plants, gas-fired turbines and renewable energy sources are locally based, creating more jobs in many more places, and these smaller players are amenable to public demands for reduced pollution and greater efficiency.

Many Brexit supporters tend to be skeptics of global warming theory who will not agonize over using North Sea gas to heat their homes and power their refrigerators. The pro-EU minority, in contrast, have tended to buy into a questionable climate-change theory without ever considering the fact that the primary funder of the inaugural 1997 summit for the Kyoto Protocol was the Tokyo Electric Power Company (TEPCO). From its inception, climate change theory was a propaganda ploy by the nuclear industry, which are now denying the truly lethal impact on human life and the environment of the ongoing Fukushima meltdowns.

None of the climate scientists dare broach the issue of Fukushima’s devastating impact on the atmosphere and waters of the Pacific Ocean, the Arctic now-fragmented icecap, North America and northern Europe. Radioactivity adverse effects have overwhelmingly surpassed by far the gradual changes attributed to carbon dioxide.

Immediately after its Fukushima disaster, Hitachi-GE (GEH) purchased operating rights for two nuclear plants along the Irish Sea. As part of the NuGeneration consortium, Toshiba-Westinghouse is raising funds for a new site in Cumbria, on the northern edge of the Sellafield radioactive wasteland. In a sick joke that recalls Monty Python, TEPCO has signed an agreement with the UK Nuclear Decommissioning Authority (NDA) to “clean up” Sellafield, contributing their invaluable experience from the Fukushima death zone.

The sites for nuclear plants that serve urban centers are usually pastoral locations with unfamiliar names, which requires the dispossession rural folk with the de-facto suspension of local rights and  productive relationships with the natural environment. The monopolistic mind-set of the nuclear sector is disdainful to local initiatives, for example, the transformation of a northern Wales aluminum plant into a biomass power-generation facility.

Competition from the Hitachi-GE (GEH) at Wylfa on the nearby isle of Anglesey (Ynys Mon in Welsh) will surely undermine the biomass initiative while overshadowing the local economy under a dark cloud of anxiety. Then some day in the future, it will be determined that Welsh forests are too radioactive for burning biomass, and nuclear will be triumphant over a lifeless moonscape. As stated by a Welsh anti-nuclear protester: “We don’t want a Wylfa-shima on Ynys Mon.

Hitachi, which purchased the Horizon project in 2012, has rights to build another advanced boiling water reactor (ABWR) at Oldbury-on-Severn, along the river that flows into the Bristol Channel, an inlet of the Irish Sea. Radioactive contamination of the Irish Sea by British Magnox reactors, including now-closed operations at Wylfa and Oldbury, is a contentious legal issue for Ireland, on the other side of those radioactive waters. Water-borne releases from the Hitachi-GE plants are inevitable, the dirty secret of every nuclear plant.

A previous attempt by Ireland to sue the British nuclear operator at Sellafield was blocked by the EU. Of course next time around, the EU will not be intervening against member-state Ireland to protect the nuclear operations of the Japanese and American operators in non-member Britain. The Paris Convention on Third Party Liability in the Field of Nuclear Energy went into force in 2014. The UK is a signatory to the treaty and the changes will allow anyone in Ireland affected by a nuclear accident that originates at a British site to sue for damages. So add a few more billion pounds to the coming losses for GEH and Toshiba-Westinghouse.

The Next Target for TEPCO

TEPCO at Sellafied, can nuclear get any more absurd? What can Tokyo Electric teach the British? The black arts of mass deception while secretly dumping nuclear waste on land and sea? One of the directors of TEPCO is Lady Barbara Judge, an American-born advocated for the British nuclear industry. Her stroke of evil genius was to link women’s right to work with nuclear energy, with a UK chapter of Women in Nuclear with a current membership of 1,000..

Why are the ovaries and minds of British women so important to the Japanese-American-French nuclear operators in the UK? Because the reproductive health of women of child-bearing age and girls is the first casualty of radioactive exposure. The campaign of diversion and denial is insidious and a taste of what’s to come from the Fukushima fanatics.

The Japanese nuclear presence is not simply business as usual; it is a strategic move to garner profits in a lucrative energy market and also to keep alive hopes for its own nuclear-weapons program, since the UK reprocesses plutonium for Japan. Therefore, after the destruction of Fukushima, the pro-nuclear Liberal Democrat government established a billion-dollar slush fund to facilitate global exports of Japanese nuclear technology.

Prime Minister Shinzo Abe then urged his side-kick Haruhiko Kuroda at the Bank of Japan to offer zero-interest rates (Zirp) to the major banks that finance Hitachi, Toshiba, TEPCO and related construction giants like Kajima. Obayashi, Shimizu and Taisei. Earlier this year, Zirp was replaced by Nirp, or negative interest rates, essentially giving away yen at a loss to the banksters to the detriment of taxpayers and individual depositors.

On top of the fallout from Fukushima, the corrupt nuclear industry has enslaved the Japanese people to the big global banks. The same fate awaits the deluded who still have blink faith in globalism. “Independence Day” on June 23 was a new beginning, and it will be up to the British people cast off the remaining chains of rapacious globalism and chart a new course toward economic self-determination that will rid the British Isles of the curse of nuclear.