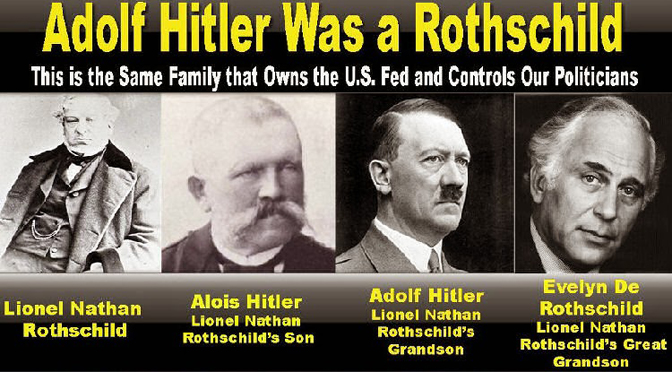 TMR Editor’s Note:
The following broad assessment of the ongoing NWO scheme to take over the world by stealth and strongmen presented by “Here Comes The Sun” is a very simple yet quite penetrating analysis of the last 100 years.

In order to fully grasp the essential points TMR highly recommends the following 3 essays. Each of these exposés provides an indispensable perspective that will deeply inform one’s understanding of the single most important geopolitical dynamic on today’s global chessboard.[1]

With these 3 essays properly understood the central thesis in the following post will make much more sense.  Only by correctly understanding these many revelations will the upcoming Second Great Depression and World War III be seen in their proper NWO* context, and as a vital phase of the endgame toward a One World Government.

“For the United States the primordial fear is Russian capital, Russian technology … I mean, German technology and German capital, Russian natural resources, Russian manpower, as the only combination that has for centuries scared the hell out of the United States.  So how does this play out? Well, the US has already put its cards on the table.  It is the line from the Baltics to the Black Sea.”
— George Friedman, STRATFOR CEO

I say better late than never, this is all astonishing. One darling of the ‘mainstream alternative press ‘ Gilad Atzmon, a jewish fellow who claims to be on the side of the truth and right has discovered that Hitler was an ultra Zionist.

It might be wise for Gilad to get off his ass and do a little more digging himself. There is a lot more to the story.

My only question is where has he been for so many years? Hunting Hitler by Abel Basti was written in 2009. Grey Wolf was written in 2011.  In The Hitler Survival Myth (1981) Donald McHale pegs this as the earliest source. It looks like truth-telling has a shot at coming back into fashion. Various sites have now posted the Hitler transfer agreement regarding sending Jews to Palestine, and their belongings later, after they learned to live on kibbutzes in the camps and in order to prepare to invade Palestine. Getting the complete story is like pulling hens teeth. I am not looking for a U-turn any time soon however from Darkmoon and her coterie of haute kultur posters who challenge common sense, 24/7 etc.

Sometimes the whole thing reminds me of this. Everybody’s got something to hide except for me and my monkey!

Some of this you can expect the ‘purveyors of truth’ to drag their feet on as reparations to Israel is still pretty big business. Yes, indeed, Hitler did arrive in Argentina in 1945 with Evan Braun and his two daughters, one of which is Angela Merkel.  There is actually an army of anti-Christs and she is sure as hell one of them.

To make this as short as possible, Hitler was a Rothschild; he Joseph Stalin, Himmler and a wide selection of the top Nazi honchos were Jewish and trained as Jesuits. Stalin was a Jesuit priest and he and Aleister Crowley’s magic child (Hitler) played chess together outside the Tavistock Institute in London.  Castro was also Jewish and a Jesuit. In fact many popes through the ages have been Jewish. In fact Hitler is on record as saying the Roman Church is the greatest organization on planet Earth. It also is the wealthiest corporation on planet Earth, so it was no trick for Pacelli to come up with 6000 gold bars for Hitler to finance his assassination squads. Pacelli went on to become pope. So if we are going to hear about our boy on the news 24/7, they could at least get the story straight, the swastika wasn’t even his.

So this saga is a whole lot simpler than some try and make it out to be. Why is it important? Well, much of the world we live in now was fashioned by those events which transpired during WWII.

Over the years others, as well as myself, have drawn a certain amount of skepticism for putting forward these ideas but now we see some Germans getting on board. We stand by everything I have posted. The policy may seem confusing but has not really changed. The goal was to ensure that no meaningful relationship would develop between Russia and Germany that would be a major road block on the way to the NWO (New World Order). Stalin and Hitler were both tools of the Tavistock Institute and designed to destroy both Germany and Russia with as little damage as possible to Rome and London. It worked very well. Now the goal is the same, Germany with their technology cannot befriend Russia with their military and vast resources. So we have mass immigration to Germany. No German technology to Russia, in fact no Germans, no problem. The Germans are to be bred out of existence through mass immigration and a European super state created with a population that knows no national identity. Yes Hitler was a Rothschild and Stalin was a Jesuit priest. The goal is the same, the technique and methodology only change. Some of this may sound familiar.

Russia and the USSR had their 911 that not many are familiar with.

The entire history of Saudi Arabia also is somewhat of a deep sordid affair.

We can say that Russia contains vast resources unknown to the general population also.

All of this did not just begin with Hitler either, it goes way back, even further than this. You see Napoleon was Jewish also and his uncle was a cardinal. We are in the final stages now and it could very well lead to world war three. It went into high gear just about here.