407,000 private sector workers are about to lose most of their pensions. 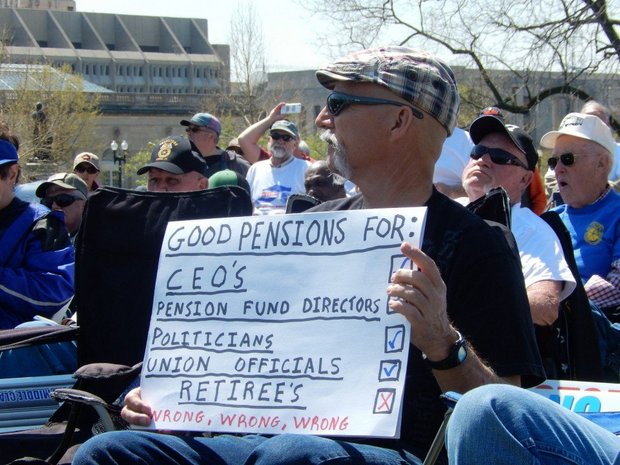 407,000 private sector workers are about to lose most of their pensions.

I first wrote about this on April 21, in One of Nation’s Largest Pension Funds (Truckers) Will Reduce Benefits or Go Broke by 2025.

The Central States Pension Fund, which handles the retirement benefits for current and former Teamster union truck drivers across various states applied for reductions under that law.

Currently the plan pays out $3.46 in pension benefits for every $1 it receives from employers. That’s a drain of $2 billion annually.

The plan filed for 60% cuts in pensions. The Treasury Department has the final say. The verdict came in today: “cuts not deep enough”.

Please consider Pensions May be Cut to ‘Virtually Nothing’ for 407,000 People.

The Central States Pension Fund has no new plan to avoid insolvency, fund director Thomas Nyhan said this week. Without government funding, the fund will run out of money in 10 years, he said.

At that time, pension benefits for about 407,000 people could be reduced to “virtually nothing,” he told workers and retirees in a letter sent Friday.

In a last-ditch effort, the Central States Pension Plan sought government approval to partially reduce the pensions of 115,000 retirees and the future benefits for 155,000 current workers. The proposed cuts were steep, as much as 60% for some, but it wasn’t enough. Earlier this month, the Treasury Department rejected the plan because it found that it would not actually head off insolvency.

The fund could submit a new plan, but decided this week that there’s no other way to successfully save the fund and comply with the law. The cuts needed would be too severe.

Normally, when a multi-employer fund like Central States runs out of money, a government insurance fund called the Pension Benefit Guaranty Corporation (PBGC) kicks in so that retirees still receive some kind of benefit.

But that’s not a great solution in this case. For one thing, the amount is smaller than what pensioners would have received under the Central States reduction plan, and is based on the number of years a retiree worked. A retiree would receive a maximum $35.75 a month for each year worked, according to the fund’s website. (That amounts to $1,072.50 a month for retiree who worked 30 years.)

But there’s yet another problem. The PBGC itself is underfunded and isn’t expected to be able to cover all the retirees in the Central States Pension Fund.

This is a sad saga for which there is no happy ending.

I replied to the person whining … “Corrupt politicians got in bed with corrupt union leaders making promises both knew could not be met.”

Public workers have no idea how well off they are vs. the private sector, yet they demand, more, and more and more, from a state that is broke.

Taxpayers owe the Chicago pension fund absolutely nothing. Bankruptcy is the solution.