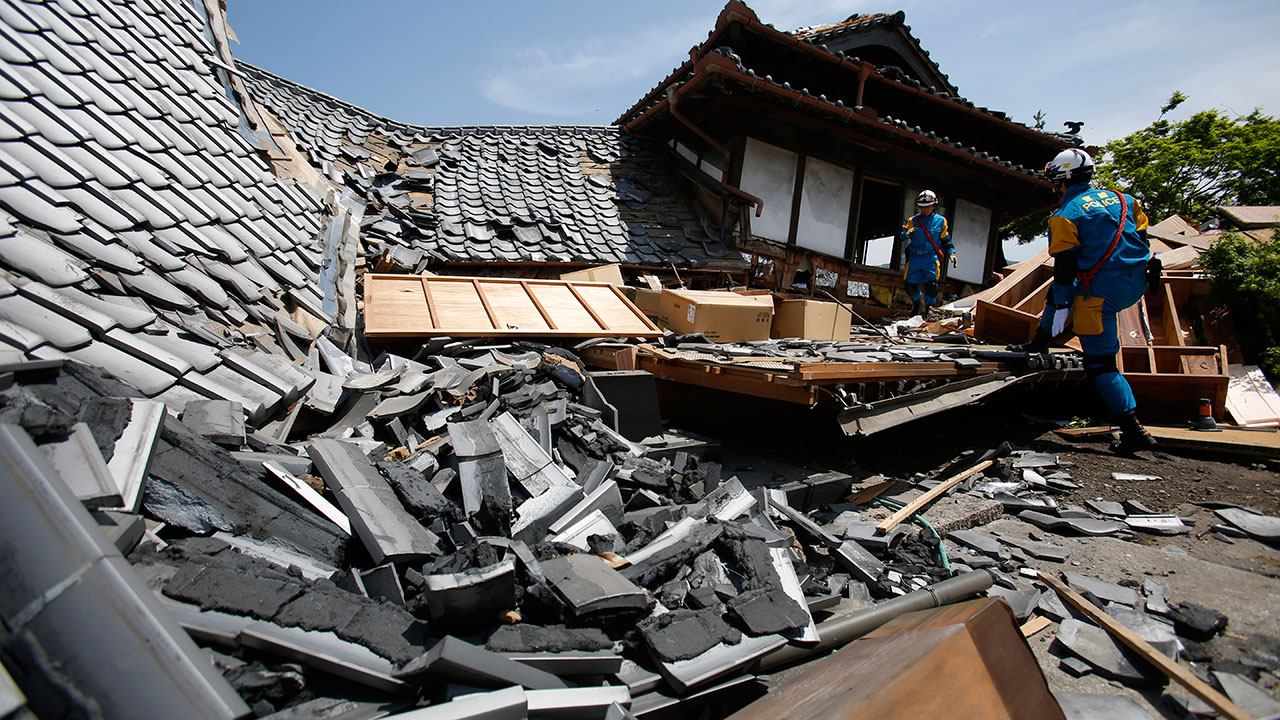 Rescue teams were racing from house to crumpled house in Japan’s southern island of Kyushu on Saturday, frantically searching for signs of life after a magnitude 7.3 earthquake left at least 32 dead and set off huge landslides.

Dozens were feared to have been buried alive and least 1,000 people were being treated for injuries, many of them serious, after the second earthquake in as many days struck the area. More than 90,000 were forced to flee their homes, including hundreds living close to a dam thought to be on the brink of collapse.

Entire hillsides fell away, entombing homes, roads and railway lines and cutting off isolated mountain villages. Some 20,000 troops fanned out across the region as authorities warned it was a race against time before a forecast storm heaped further misery on the island, threatening to set off more landslides.

“We are aware of multiple locations where people have been buried alive,” said Yoshihide Suga, the chief cabinet secretary.

The 6.2 magnitude quake on Thursday was the worst to strike Japan since March 2011, when a more powerful tremor triggered tsunamis that killed around 19,000 people, as well as the melt-down of three reactors at the Fukushima nuclear plant.

Three hours after the first earthquake, another 6.0 tremor struck directly beneath the city of Kumamoto, complicating the rescue efforts and bringing down structures that had already been weakened.

Residents were evacuated from damaged buildings – but there were hopes that the worst was over.

Those were dashed at around 1.25 am on Saturday, however, when it became clear that the first two tremors had been merely the foreshocks of the main quake.

“When the first earthquake struck, there was almost a sense of relief because everyone always assumes a major quake is coming and when it happens, you think ‘great, we’ve got another 30 years of peace and quiet’ “, said Sean Michael Wilson, a British expatriate.

“But the one we had this morning was much bigger, much more violent and it really caught everyone out”, added Mr Wilson, an author and illustrator from Edinburgh.

“Everything went wild”, he said. “I’d just put my pyjamas on to go to bed when it hit and it was chaos.

“Things were being thrown around the house and I couldn’t stand up”, added Mr Wilson. “Outside, walls and houses were coming down and, because we all thought we had gone through the worst of it, people have been affected mentally very badly”.

Mr Wilson spent last night sleeping on the sports field of Kumamoto University, surrounded by several hundred other people, who fear that more aftershocks could bring down apartment blocks and houses that are no longer safe.

“The aftershocks have been incredible”, said Mr Wilson. “We had 150 yesterday alone and we’d had 20 already by 9.30 am this morning so I decided to stop counting. And some of them are pretty big.”

Japan’s emergency services responded smoothly after the disaster, although the scale of the crisis means they are badly stretched.

Among local people, however, a Japanese version of the “Dunkirk spirit” has been evident, said Mr Wilson.

“Japanese people are very good in a crisis”, he added. “They are calm, they are organised and everyone who can is pitching in. People are helping each other and they’re all being very considerate.”

Blankets were being handed out to people who are sleeping rough and food is being delivered, while student volunteers were also helping.

Search and recovery efforts across Kyushu are focused on houses and apartment blocks that have collapsed, as well as hillside properties that have been engulfed in massive slides of mud and rock.

On Saturday evening, emergency teams were dealing with 97 reports of people trapped in collapsed buildings with a further 10 caught in landslides across the mountainous central areas of Kyushu.

Some of those pulled from the rubble spoke of the horrifying moments when they found themselves trapped.

“The house started to shake, so I grabbed my cell phone and was about to run when the house came down”, said Fumio Iwamoto, 54, according to Kyodo News.

He only survived because he was in a small pocket in the rubble of his two-storey home in Kumamoto City.

Mr Iwamoto was rescued after about 30 minutes. “It felt so long, but I’m thankful that at least I’m still alive,” he said.

Koki Shibata, a 31-year-old student, was trapped when his apartment building collapsed.

Mr Shibata said he was unable to stand when the building began to shake. “And the next thing I knew I was buried”, he said.

Neighbours  broke through the collapsed walls with hammers and crowbars to rescue him. “My friends encouraged me so it did not feel that it took a long time”, he said. “I’m really grateful and glad to be alive – but I am worried as some of my friends seem to still be trapped in the apartment.”

The block is a residential unit for students at Tokai University and work to reach those still inside was continuing yesterday evening. Two students who lived in the property are among those confirmed dead.

Emergency services are warning people to stay away from their homes because aftershocks may be sufficiently powerful to cause damaged buildings to collapse.

Bridges and tunnels have collapsed, making it impossible for emergency teams to reach some of the more remote parts of Kyushu, while a traditional inn that has been cut off is believed to have sufficient drinking water for guests and staff for only one more day.

The city hall in Uto was largely destroyed and rail services have been halted until tracks can be repaired. More than 200,000 homes are without power and water supplies to nearly 400,000 homes have been severed.

The authorities reassured anxious residents that there was no threat of a nuclear disaster akin to that unleashed in Fukushima in 2011, saying that  there had been no damage reported at two nuclear power stations in Kagoshima and Saga prefectures.

Saturday morning’s earthquake was relatively shallow, less than 8 miles below the surface, and the Japan Meteorological Agency quickly issued a warning of tsunami up to 3 feet high along coastal areas of Kumamoto Prefecture. That alert was lifted a couple of hours later.

Authorities are warning of further aftershocks for the following week, some of which will be powerful and may register a magnitude of 6.

Seismologists are concerned that such unprecedented seismic activity – the last big earthquake to strike Kyushu was in 1889 – could have a knock-on effect across the island.

A minor eruption was recorded on Friday on Mount Sakurajima, on the southern tip of Kyushu, although there is more concern over a possible eruption of Mount Aso, the largest volcano in Japan. There were already fears over the stability of Mount Aso, which has had a Level 2 warning in place – meaning that no-one should approach the crater – since November 2015.