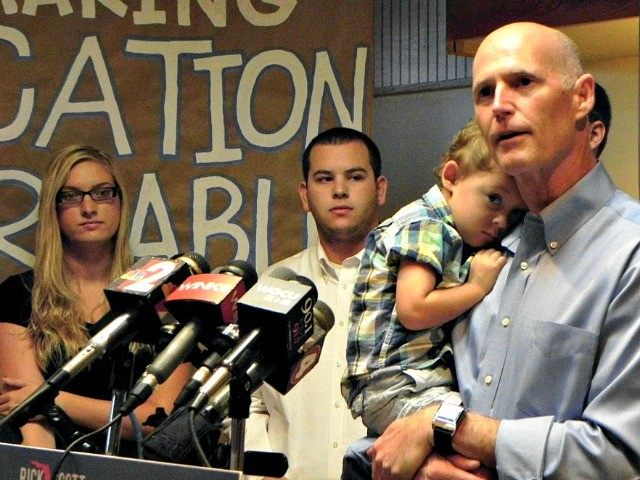 Gov. Rick Scott (R-FL) signed a bill into law Friday that bars state and local governments, and Medicaid managed care plans, from contracting with organizations that have any relationships with abortion clinics.

Still another provision bans the sale and donation of fetal tissue from aborted babies and also raises penalties for improper disposal of the remains of aborted babies. Some states have discovered that Planned Parenthood abortion clinics have contracted with waste management companies that burn aborted babies along with bio-hazard waste.

The legislation prohibits state agencies, local governments, and Medicaid managed-care plans from making contracts with any organization that owns, operates, or has an affiliation with abortion clinics.

“As a result of this bill, thousands of people across Florida may no longer be able to access essential reproductive health care, such as cancer screenings, birth control, and well-woman exams,” Richards said in a statement. “This cruel bill is designed to rip health care away from those most at risk.”

Despite Planned Parenthood’s six-figure ad buy to pressure Scott into vetoing the measure, and the delivery of 12,000 signatures on a petition to his office, the governor has been a supporter of pro-life legislation.

Nevertheless, Planned Parenthood and abortion activists are vowing to fight the new law.

“We’re evaluating all of our options and will do everything in our power to protect access to care,” said Laura Goodhue, executive director of the Florida Alliance of Planned Parenthood Affiliates.

State House sponsor Colleen Burton (R), however, said an amendment approved by the Senate before the final votes ensured the bill is constitutional.

Regarding the abortion safety requirements – which many states have passed in the wake of the conviction of abortionist Kermit Gosnell — Ingrid Delgado of the Florida Conference of Catholic Bishops said in a statement, “Abortionists will finally be held to the same standard as all other physicians who perform invasive procedures in a non-hospital setting by the requirement to have admitting privileges or a transfer agreement with a nearby hospital.”

In 2013, the Gosnell case served as the impetus for Texas’ abortion safety law. Gosnell – who was convicted of murder for severing the spinal cords of babies born alive during abortions – also was found guilty in the death of one of his patients due to an anesthesia overdose. Despite complaints about the abuses occurring in Gosnell’s abortion clinic, both the abortion industry and the state of Pennsylvania failed to intervene in his “house of horrors” for nearly two decades.

Texas is now awaiting a decision by the U.S. Supreme Court on a challenge to its abortion safety law.

“It is incomprehensible that opponents suggest the bill makes women less safe,” Delgado said about the Florida law.

The new law also officially changes the definition of the first trimester of pregnancy to the period from fertilization through the end of the 11th week. Additionally, the measure requires at least 50 percent of abortion clinic records to be inspected each year.

Within the last several days alone, states such as Indiana and Arizona have also passed new abortion restrictions. Last October, GOP presidential contender Sen. Ted Cruz (R-TX) told Breitbart News in New Hampshire that state legislatures and governors need to “stand up and lead” on defunding Planned Parenthood, since Congress has been unwilling to do so.

The new abortion restrictions come in the wake of a series of undercover videos that exposed Planned Parenthood’s apparent practices of selling the body parts of babies it aborts and altering the position of babies during abortion in order to harvest the most intact organs.

Though Planned Parenthood has denied any wrongdoing in its sale of body parts, the abortion business also released a statement in October announcing it will no longer accept payments for aborted fetal tissue. The organization and its leftwing media supporters continue to insist the videos, produced by Center for Medical Progress (CMP), were “deceptively edited.”

However, a Democrat opposition research firm named Fusion – hired by Planned Parenthood to review the videos — said that while their analysts observed the videos had been edited, “the analysis did not reveal widespread evidence of substantive video manipulation.”

An analysis by Coalfire, a third-party forensics company hired by Alliance Defending Freedom, found that the videos were “not manipulated” and that they are “authentic.”