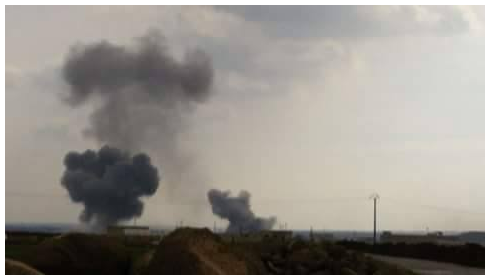 Update: At least two sources confirm that Turkey also fired on the Syrian army on Saturday, an exceptionally provocative move.

Update: Washington has now weighed in and is asking the Turks to please stop shelling the soldiers the Pentagon is arming.

*  *  *
Even as all sides – including the US, Russia, Saudi Arabia, and select rebel groups – pretend to be working towards a ceasefire and a diplomatic solution to the five year conflict in Syria, actions speak louder than words, and to put it as succinctly as possible, everyone is still fighting.

In fact, the fighting is more intense than ever. Russia and Hezbollah are closing in on Aleppo, the country’s largest city and a key urban center where rebels are dug in for what amounts to a last stand. If the city is liberated by the government (and yes, “liberated” is more accurate than “falls” because occupied territory belongs to the Syrian government, not to Sunni extremists), Assad will have regained control of the country’s backbone in the west.

That would effectively mean the end of the rebellion and the Gulf monarchies, not to mention Turkey, are not happy about it. “The main battle is about cutting the road between Aleppo and Turkey, for Turkey is the main conduit of supplies for the terrorists,” Assad said in an interview with AFP on Friday.

That supply line has been severed and now, it’s do or die time for the rebels’ Sunni benefactors in Ankara, Riyadh, and Doha. Either intervene or watch as Hezbollah rolls up the opposition under cover of Russian airstrikes, restoring the Assad government and securing the Shiite crescent for the Iranians.

As we documented extensively this week, the Saudis and the Turks are now set to invade. Assad has promised to “confront them”, which of course means that the IRGC and Hassan Nasrallah’s army are set to come into direct contact with Turkish and Saudi troops, setting the stage for an all-out sectarian war that will almost invariably end up pitting NATO against the Russians. Note that this is different from Yemen, where Tehran fights via proxies rather than directly against the Saudi military.

On Saturday the stakes were raised when Turkey said Saudi Arabia is set to send warplanes to Incirlik.

As a reminder, access to Incirlik was the carrot Erdogan used last summer to convince NATO to acquiesce to Ankara’s brutal crackdown on the PKK. “Let me wage war against my political rivals, and you can use our airbase,” is a fair approximation of Erdogan’s proposition.

Now, it appears the Saudis are set to use the base as a staging ground for strikes in Syria.

As RT reports, “Saudi Arabia is to deploy military jets and personnel to Turkey’s Incirlik Air Base in the south of the country.”

Of course the excuse is the same as it ever was for everyone involved: the fight against ISIS.

“The deployment is part of the US-led effort to defeat the Islamic State terrorist group,” Turkish Foreign Minister Mevlut Cavusoglu said. “At every coalition meeting, we have always emphasized the need for an extensive result-oriented strategy in the fight against the Daesh terrorist group,” he added.

Cavusoglu was speaking to the Yeni Safak newspaper after addressing the 52nd Munich Security Conference where over 60 foreign and defense ministers are gathered (see here for more from the meeting).

“If we have such a strategy, then Turkey and Saudi Arabia may launch a ground operation,” he added.

Remember that Ankara’s primary concern in the country is ensuring that the YPG (i.e. the Kurdish opposition that Erdogan equates with the PKK and thus with “terrorism”) doesn’t end up declaring a sovereign state on Turkey’s border. That, Erdogan fears, may embolden Kurds in Turkey who are already pushing for more autonomy.

In short: somehow, Turkey and Saudi Arabia need to figure out how to spin an attack on the YPG and an effort to rescue the opposition at Aleppo as an anti-ISIS operation even though ISIS doesn’t have a large presence in the area.

How they plan to do that is anyone’s guess, but the following tweets should tell you everything you need to know about where this is headed.

Here is the statement by the PYD #Syria #Turkey pic.twitter.com/nXY97yNNsg

As you can see, Turkey has begun shelling Aleppo in what is indeed a very serious escalation that will likely prompt a Russian response.

“Shelling was reported at Menagh air base, a former Syrian Air Force facility that Kurds seized from Islamist rebels just days ago, and at three other positions between the airport and Turkish border,” The Independent reports. “The air base has been a key target for several parties in the Syrian civil war since 2012, being besieged by rebels for almost a year until it was seized by a coalition including an early form of Isis and the al-Qaeda-linked Jabhat al-Nusra in August 2013 [and] it remained in rebel hands until Thursday, when Kurdish PYD fighters capitalised on the diversion caused by Bashar al-Assad’s forces and Russian air strikes attacking rebel areas to the south to seize Menagh.”

PM Davutoglu says the shelling was in line with “rules of engagement.”

“A Kurdish official confirmed the shelling of Menagh air base in the northern Aleppo countryside, which he said had been captured by the Kurdish-allied Jaysh al-Thuwwar group rather than the Kurdish YPG militia,” Reuters says, adding that “Both are part of the Syria Democratic Forces alliance.” That group, you’re reminded, was the subject of intense scrutiny late last year as we documented in our classic piece “Full Metal Retard: US Launches “Performance-Based” Ammo Paradrop Program For Make-Believe ‘Syrian Arabs.'” It’s the same group the US has been paradropping weapons to.

To sum up, Turkey is deliberately attempting to reverse gains made by the US-backed Kurds in an area that is under siege by the Russians and Iran. Or, more simply: utter chaos.

Here’s what happened according to pro-AKP (i.e. take it with a grain, or maybe a whole shaker full of salt) Anadolu Agency:

The Turkish military responded to an artillery attack on an army base close to the Syrian border on Saturday, a military source said. According to the unnamed source, who spoke on condition of anonymity due to restrictions on speaking to the media, the Akcabaglar base in Kilis province was shelled by the forces of the “PYD/PKK” — referring to a Syrian Kurdish group and its affiliate PKK, which has waged war on Turkey since 1984.

The shelling came from Azaz in Aleppo province, which has been the scene of recent heavy fighting. Turkish forces reacted within rules of engagement that provide for an immediate response to any border threat, the source said. There was no further description of the form of response or detail on when the incident occurred.

In a separate incident, the army also responded to mortar fire from Syrian government troops on a Turkish police station in Calibogazi, Hatay province, at 2.55 p.m. local time (1255GMT). Again, there was no information on the type of response.