Deutsche Bank Is Scared: “What Needs To Be Done” In Its Own Words 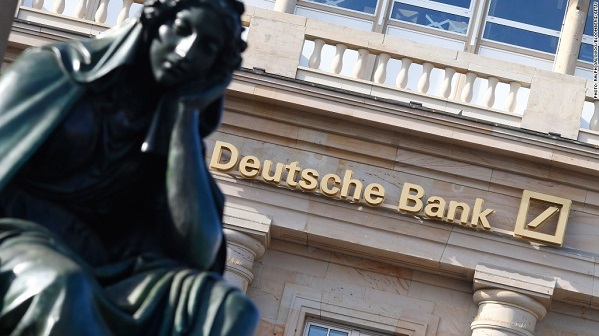 Deutsche Bank Is Scared: “What Needs To Be Done” In Its Own Words

It all started in mid/late 2014, when the first whispers of a Fed rate hike emerged, which in turn led to relentless increase in the value of the US dollar and the plunge in the price of oil and all commodities, unleashing the worst commodity bear market in history.

The immediate implication of these two concurrent events was missed by most, although we wrote about it and previewed the implications in November of that year in “How The Petrodollar Quietly Died, And Nobody Noticed.”

The conclusion was simple: Fed tightening and the resulting plunge in commodity prices, would lead (as it did) to the collapse of the great petrodollar cycle which had worked efficiently for 18 years and which led to petrodollar nations serving as a source of demand for $10 trillion in US assets, and when finished, would result in the Quantitative Tightening which has offset all central bank attempts to inject liquidity in the markets, a tightening which has since been unleashed by not only most emerging markets and petro-exporters but most notably China, and whose impact has been to not only pressure stocks lower but bring economic growth across the entire world to a grinding halt.

The second, and just as important development, was observed in early 2015: 11 months ago we wrote that “The Global Dollar Funding Shortage Is Back With A Vengeance And “This Time It’s Different” and followed up on it later in the year in “Global Dollar Funding Shortage Intensifies To Worst Level Since 2012” a problem which has manifested itself most notably in Africa where as we wrote recently, virtually every petroleum exporting nation has run out of actual physical dollars.

The point is, it all started with the rising dollar and the ensuing global dollar shortage, and thus, the Fed embarking on what may be the biggest central bank error of all time. To be sure, the consequences are wide ranging: from the collapse in crude, to the tremors and devaluations in China, to the tightening financial conditions, to the (manufacturing) recession in the U.S., and most recently, to whispers that Deutsche Bank, the bank with $60 trillion in notional derivatives, may be the next Lehman Brothers.

Which, incidentally, brings us to none other than one of Deutsche Bank’s most respected credit analysts, Dominic Konstam, who clearly has an appreciation of the existential risk he finds himself in, not only career-wise, but in terms of the entire financial structure. We know this, because after reading his email blast from this morning we realize just how vast the fear, if not sheer terror, is among those who truly realize just how broken the system currently is.

We have reposted his entire letter below, because it represents the most definitive blueprint of everything that is about to be unleashed – especially since it comes from the perspective of one of the people who is currently deep inside Deutsche Bank and realizes just how close to the edge the German bank is.

What Konstam makes clear, in no uncertain terms, is that the the problem is the one we laid out back in November 2014: “It is not oil, it is not in the banks, it is a run on central bank liquidity, especially dollar based and there needs to be much more ($) liquidity.”

He also makes it quite clear that investor fears about contagion are well-founded: here it is in the words of a Deutsche Banker:

The exposure issue has been downplayed but make no mistake banks are heavily exposed to Asia/MidEast and while 10% writedown might be worst case for China but too high for the whole, it is what investors shd and do worry about — whole wd include the contagion to banking hubs in Sing/HKong

His solution? It’s actually quite disturbing to all those who thought that all our warnings that cash would be outlawed were nothing but a joke. For those pressed for time jump straight to the “What needs to be done section” – it’s a doozy.

So back to the  original question WHAT NEEDS TO BE DONE. Simple?

The existential fear in Deutsche Bank’s analyst is tangible, as is the implied threat: “don’t do these things, and if Deutsche Bank and its $60 trillion in derivatives blow up, it will be on you.”

And with that we check to the central bankers who will do precisely as instructed, because Deutsche Bank is simply too vast and too systemically important to fail: in fact its failure would be orders of magnitude more costly and more destructive for modern capital markets than Lehman.

As a result, we expect all of Konstam’s suggestions, from a major China devaluation, to a halt to negative rates, to a Yellen relent (perhaps as soon as tomorrow), to negative rates being passed on to savers, to the taxing of cash withdrawals “to encourage spending not saving”, and all the other bullet points. Unless, of course, someone is intent on seeing Deutsche Bank liquidate, as was the case with Lehman.

That said, Konstam’s final sentence is the most ominous:

He is referring to the “Miracle of Worgl“, when during 1932 – in the middle of the Great Depression – the Austrian town unleashed a monetary experiment in which “Certified Compensation Bills” were issued, a form of currency commonly known as Scrip, or Freigeld, one influenced by the monetary theories of the “hyper-Keynesian” Silvio Gesell.

Why does Konstam bring up scrip as the solution to not only Dutsche Bank’s problems, but the entire problem of a run on central bank liquidity, and by implication, credibility?

Because it’s coming… just to save the banks one more, final time.

Appendix: the part from Konstam’s letter not dealing with policy recommendations is below

Strategy Update: What we need….Main point is still policymakers need to recognize the problem and have a total rethink of strategy…Yellen is a detail in the grand scheme of things if its more of the same about risks to the outlook but labor mkt strong, blah blah Even Draghi has clear re-think issues.. no longer about more negative rates in the way they have been doing it but cutting thru the incipient financial crisis. All of these though are symptoms of the wider problem — the collapse in global liquidity that  is on going in the post Fed qe phase, reflected in an overly strong dollar/loss of reserves and end user deleveraging from china to opec to credit. It picks off the weaker links and makes people think that that is the “problem”.

So about 3 weeks everyone was saying if only oil would stabilize.. and “it has”.. but that wasn’t the solution; Now it’s if only euro bank credit stabilizes, and no doubt there will be a level when that happens.. but that won’t be it.. The PCA analysis from Jerome was neat becos it captures the investor base-plus running on the hampster wheel thinking it’s found the problem. The very fact that the weightings have shifted from oil to euro financials doesnt mean the problem is different now then it was, it’s the same problem but PCA can’t find it– by definition. (Correlation is not causality). It merely captures the menu du jour. Soon enough the “problem” will be equities generally or maybe core rates dropping “too low”, these weightings invariably will rise — and thats why its very dangerous to use the last year’s correlation to determine which markets have over or under reacted to the best proxy of the problem, at any particular time. For example rates look too low in the PCA now but that’s precisely becos they were almost invariant to lower oil late last year.

The refrain from the customer base last year if you recall was that rates don’t rally when there’s risk off.. that must be becos of loss of reserves or investor too long etc (George’s QT).. But now they are moving and the correlation is becoming stronger. I would posit that instead of a low correlation dissauding investors from hedging with rates they are actually needing to get super long to make up for poor performance on risk assets becos it is they only thing that comes close to a proper hedge. So the mother of all rate rallies will be driven by investors going way over long on the either side UNLESS or UNTIL policymakers do the right thing… Our traders have been debating whether the market trades long or not with idea that there seems to be better selling.. but CoT got shorter last week and even on the open interest adjment Alex Li did, it still looks to us that the market trades short — or not long enough..And that means we do not want to fade this move absent the policy shift,.. and that means why can’t 10s test the old lows. On the euro financial issue itself.. our equity analysts have got a lot of attention around the specifics of the euro fincl issue from the concerns over exposures to commodities/china.. the inability to earn in a low for long/negative yield world to the overreach of regulation with limitations on capital raising/bail in issues.. One of the main issues we would argue is that policymakers need to be break what wd become a liquidity issue for banks in the status quo. TLTROs had poor take up becos banks were capital constrained and didn’t want to lend — that now limits their access to liquidity going forward so if the exposure/bail in concerns force banks to the ECB there better be an open door. In the xtreme the ECB cd buy the (sub) debt but the politics probably don’t allow that — better might be to simply offer cheap liquidity for alternative vehicles to do so or better yet have unconditional LTROs — either way it is probably not the time to go deeper negative on rates.

The exposure issue has been downplayed but make no mistake banks are heavily exposed to Asia/MidEast and while 10% writedown might be worst case for China but too high for the whole, it is what investors shd and do worry about — whole wd include the contagion to banking hubs in Sing/HKong.. and for the record BIS data is as follows for countries’ bank exposures — we’ll give China first, whole second.. Australia: 32bn/74bn; france 43bn/226bn; germany 28bn/120 bn; japan  70 bn/367bn; uk 169bn/657bn; US 87bn/409bn. Note according to Fed rough proxy of US bank capital is over 1.5 tn so in worst case scenario it would “only” be 3% of capital.. a lot but managable.. but that’s then becomes the problem for UK, French banks in particular,,ironically not obviously Germany so much..altho Europe has the issue of earning the capital that US banks are better able to do.