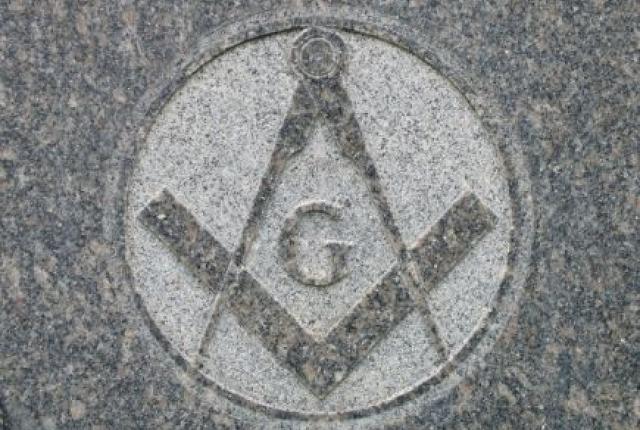 Is there any hope for a society that allows a satanic cult bent on its destruction to operate openly, and embraces its members as its leaders? “Freemasonry” is the lever satanist bankers use to control the world. Even the alternate media will talk about the “Jews” but rarely mention Freemasons. In this vintage essay, aimed at a Muslim audience, Ernst Zundel provides an overview of Freemasonry and its power. “So deeply accustomed are Westerners to the acceptance of these secret societies in their midst that they have no misgivings in electing or appointing known Freemasons to public office…”

Unknown to most people … is the tremendous power and influence exercised in the Western world by some branches of a politicized Freemasonry and all its cover organizations, such as the Kiwanis, Rotary, Lions, etc.

Many important Western decision makers, politicians, economists, and military officers are either members of a secret society or are influenced and often dominated by such members… This is the same globalist satanic structure which we detect in some lodges of Freemasonry, such as the PII Lodge involved in the Calvi Affair in Italy in the early seventies – secrecy, duplicity, the exercise of undue influence, infiltration, corruption of officials and, where necessary, it seems, even assassination. That most Freemasons are often unaware of the directors and real directions of their secret organization or brotherhood does not, it seems, preclude their blind, uncritical support of this organization and their obedience to its directives. The orientation and many of the rituals, emblems and graphic images of these secret societies of the West came directly from the Kabbala of the Babylonian Talmud. Their content is of allegedly ancient Egyptian-Jewish origin; many of their goals today are serving Jewish ends; and many of their lodge members and high-ranking Masons have been, and are, Jewish. This explains the consistent support of Freemasonry for the goals and machinations of International Zionism in its many forms. It also explains the politically involved Freemasons’ consistent role in directing the advance of world crime, corruption, vice, poverty, war, revolution, collapse and chaos. All this is frequently directed from their high-ranking positions in the Western political, economic and, unfortunately, law enforcement and military establishments.

On behalf of the Zionists, the Gentile members of these secret societies have spread these plagues not only in the West, but throughout the entire world in which Western influence today has become all-pervasive. Many members, who become aware of their organizations’ role in causing world suffering, leave disenchanted. Others obviously rationalize these horrors as mere desirable “change” and as necessary steps in the creation of a utopian world government, thus helping to fulfill their Zionist masters’ messianic dreams.

President John F. Kennedy stated before his assassination that there were 17 million members of various quasi-Freemasonic secret societies in the U.S. alone. The most famous one of recent times is George Bush, who was a member of “Skulls and Bones” – some weird occult outfit. Most U.S. Presidents have been members of such secret societies – two notable exceptions being John F. Kennedy, who was removed from office by assassination, and, apparently, the non-Mason Nixon, who was replaced by 33rd degree Freemason, Gerald Ford.

In one’s travels through America and other “Anglo-Saxon” countries, one frequently notices that the local Freemasonic temple is usually in close proximity to the seat of federal, state or local government – usually within easy walking distance of the various state capitals. So deeply accustomed are Westerners to the acceptance of these secret societies in their midst that they have no misgivings in electing or appointing known Freemasons to public office, even clearly though it will not always be in the public interest how these public officials act. Their acts will, of necessity, sometimes be in the interest of their secret society – otherwise, why become a member? And why all the secrecy – the secret passwords, the secret handshakes etc., which in itself makes the institution anti-democratic in that it gives its members a secret edge or “in”? One has a right to suspect that such public officials’ public policies will not be made in the broad, open, well-lit public offices, but often in the narrow, smoke-filled confines of secret conclaves in the company of their equally secret “lodge brothers”. No wonder U.S. policy always differs in practice from the public pre-election promises made by many of these hypocrites!

Even a child could readily perceive the simple and obvious truth: no organization which claims to do only good, as claim the various Freemasonic organizations, need be secret. But brainwashed children become brainwashed adults, and the thorough Zionist brainwashing has made the Western majority blind to the enemy of Western traditions that works in their very midst. America as a nation is thoroughly brainwashed. But Americans are slowly waking up, thanks to the as yet uncensored information previously suppressed, but now ever more widely available – on the Internet!

These men are the focal point for the dark forces arrayed against all mankind, for their control of the world’s wealth directs and determines largely what is done or not done in the real world of commerce, industry and government, or whether what is done is for the greater public good or will produce evil for those who engage in evil schemes.

While the world bankers, it seems, act in perfect harmony with the Talmud, they act in perfect defiance of the Koran, for their wealth is based on the evil and sin of usury and thereby their wealth is acquired without honest, productive work. Judging from the state of the world today and the fruits of the bankers’ policies, there can be no doubt about what these evil men are doing with the vast wealth we in America and Germany and the Arab nations have put at their disposal! It is rarely, in the end, to our benefit. More often than not, it has led to hardships, wars, and the destruction of morals and ethics in our societies.

The Islamic nations are vulnerable to blackmail by the bankers of the world who can devalue the currencies of the Arab countries and thus, with the stroke of a pen, debauch their money derived from oil earnings. They can bribe and browbeat Western governments into freezing or seizing Islamic assets – as has happened to Iran, Iraq, and Libya, just to name a few.

But the foremost evil concocted and directed by the International Bankers was, and to some degree still is, International Communism!

It is fashionable to say that “Communism is dead!” Nothing could be farther from the truth! Communism is not dead in the heads of tens of millions of brainwashed individual intellectuals, teachers, professors, influential individuals in the media and in education, both in the East and West. Communism has merely been repackaged and recycled – Red China is still Communist with its 1 billion people. Although the “threat of Communism” has been removed from Western thinking, the fear of Communism is deep. That’s why it is still being used to smear the image of some of the Arab countries.

We of the West are constantly exposed to Zionist propaganda which claims that most Islamic peoples are pro-Communist, and that “little Israel” is our only “democratic”, anti-Communist ally and bastion in the Middle East. This is an outright deception. The Laws of Islam forbid atheism! … Even though “official Communism” is now supposedly dead, Communists of greater or lesser degrees still permeate the entire Western political, economic, industrial, mass media, and educational establishments. So “Red” have many Western government policies become that their own people no longer discern them as objectives of a Communist world domination by convinced Marxists who pursue their goals as ever. Its ways and means still are class struggle and revolution – by more clever means! That is the reason why we see crippling, politically motivated, recurring waves of strikes, inflation, deflation, and more strikes, combined with the systematic de-capitalization of the Western industrial economies.

Communism has always fed off and continues to feed off crisis situations – therefore, its agents of every hue from pallid pink to flaming red ACT to create as many crises as possible within the economic, cultural and social fabric of the West – in order to divide, conquer and yet rule the world. Their tactics have changed – not their goals! There has only been a change in the tactical applications.

The degree to which the West has been infiltrated and dominated and largely destroyed by Communists and their sympathizers for about 100 years is often unknown even to Westerners and most definitely to non-Westerners alike. What remains of the West is the glittering facade of an internally dilapidated edifice which has been so weakened and robbed of spirit by the many internal parasites and traitors, who have worked as diligently as termites, that the entire structure of the West is threatened with a Soviet Union-like collapse or implosion. It has happened before to great nations. If it could happen to ancient Egypt, Greece, Persia and Rome, it certainly can also happen to the West, which each day more resembles these ancient civilizations in its abundance of material possessions and in its poverty of spirit, courage, and wisdom – especially in its will to defend itself in order to survive.

What can be done to arrest and, finally, to reverse this dangerous decline? How and when can we begin to save ourselves from the international destroyers and enslavers of mankind?