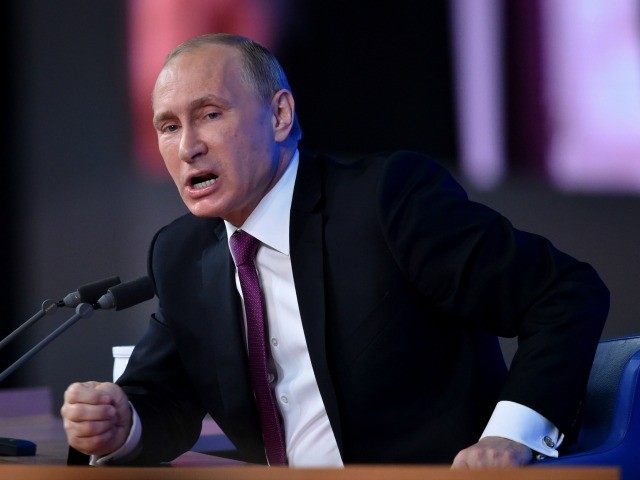 Russian President Vladimir Putin accused the U.S. of leaking the flight path of a downed Russian jet to Turkey, allowing the latter country to shoot it down.

“The American side, which leads the coalition that Turkey belongs to, knew about the location and time of our planes’ flights, and we were hit exactly there and at that time,” he said according to The Independent. “Why did we give this information to the Americans if they did not pass it along to the rest of the coalition?”

Turkish forces shot down a SU-24 bomber on Nov. 24 after the jet allegedly violated their airspace. The forces claim they sent the jet numerous warnings, but Russian officials saidnone were received. The Turkish military released audio of the warnings sent to the Russian plane the following day, but Russia said the recordings are fake.

Putin told the media that Russia is willing to “cooperate” with the West in Syria against the Islamic State (ISIS/ISIL) but does not believe the West is ready to work with their coalition.

“At the moment, unfortunately, our partners are not ready to work within the format of single coalition,” said Dmitry Peskov, Putin’s spokesman.

If Russia and the U.S.-led coalition do work together, Putin warned, their ties would be fragile, given that one of the members of the coalition, Turkey, shot down their warplane on Nov. 24.

“We are ready to cooperate with the coalition which is led by the United States. But of course incidents like the destruction of our aircraft and the deaths of our servicemen… are absolutely unacceptable,” Putin said at a news conference with French President François Hollande. “And we proceed from the position that there will be no repeat of this, otherwise we’ll have no need of cooperation with anybody, any coalition, any country.”

On Saturday, Putin passed numerous economic sanctions against Turkey. Earlier this week, Dmitry Medvedev warned that the many joint projects between the two countries could be in danger. The Turkish government “commissioned Russia’s state-owned Rosatom in 2013 to build four 1,200-megawatt reactors in a project worth $20 billion.” The TurkStream pipeline project could be affected as well, a project intended as a way to transport natural gas to Europe without going through Ukraine.

“There are a lot of Turkish companies operating in the construction business in the Russian market; there is cooperation in the tourism sector,” stated Dmitry Abzalov, the vice president of the Center for Strategic Communications. “The termination of relations with Moscow on these issues will be negative for the Turkish economy, and it will hit the national currency the lira.”