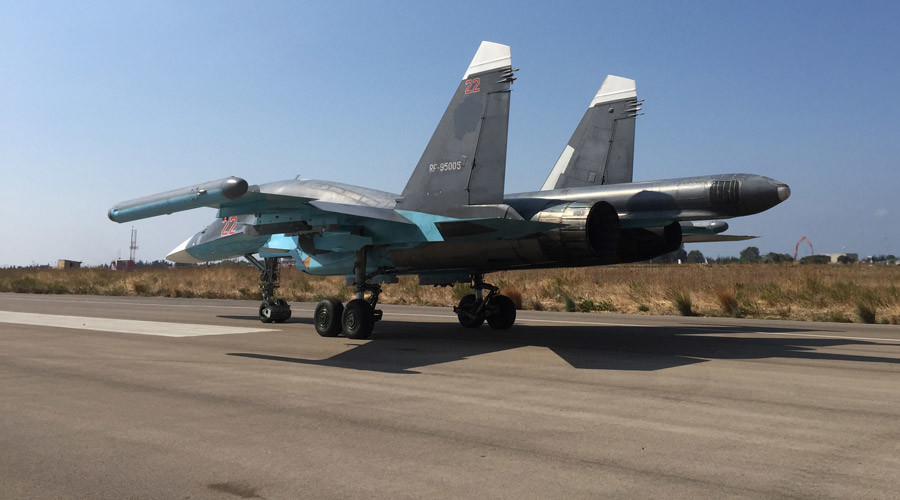 RT.com
The Russian Air Forces have eliminated several Islamic State commanders striking a building in Raqqa, where they were holding a meeting. The intelligence data for the operation was provided by opposition forces, Russia’ Defense Ministry said.
TrendsIslamic State, Russian anti-terror op in Syria,Syria unrest

“The reported area was constantly surveyed from air for two days. After the arrival of commanders was confirmed, a Su-34 targeted the building used as the venue of the meeting. The building was totally eliminated by a guided bomb,” the ministry reported on its website Wednesday.

In total, Russian bombers carried out 121 sorties over the last two days, hitting a total of 424 targets across Syria. The raids were undertaken by Su-24, Su-25 and Su-34 warplanes.
In the Aleppo province, Su-25 planes conducted a number of airstrikes against terrorist targets. As a result, a tank and three vehicles were destroyed. Attacks in the Idlib province also targeted Al-Nusra Front forces, while an IS arms depot, which contained weapons and machinery, was destroyed around Homs.

Syrian troops also made significant gains in the Deraa province on Wednesday, aided by Russian air support. Soldiers entered the town of Sheikh Maskin, which is on a key supply route between the capital, Damascus, and the city of Deraa. A commander in a rebel group said that there had been at least 100 Russian raids over the last two days, which had given troops loyal to Syrian President Bashar Assad the upper hand, Reuters reports.

“The troops of the Syrian Democratic Forces, commanded by Ayman Flyat el-Ganim, with the support of the Russian Air Force, conducted an offensive toward the ISIS capital, Raqqa. As a result of this offensive, approximately 20 residential areas were liberated from extremists. Strategic control was established over the important dam on the river Euphrates at al-Ahmar,” Lieutenant-General Sergey Rudskoy said at a Russian Defense Ministry press briefing in Moscow on Tuesday.
http://twitter.com/mod_russia/status/682211860020654080/photo/1?ref_src=twsrc%5Etfw
Russia has come under fire from the West and human rights groups for killing civilians and medical infrastructure during its airstrikes. However, this is a charge that Moscow vehemently denies.

“I want to say this with dignity. Not a single time did my pilots hit any ‘no-go’ sensitive targets such as schools, hospitals, mosques or holy sites,” Colonel General Viktor Bondarenko, the head of the Russian Air and Space Forces, said in an interview with the Rossiya 24 news channel on Sunday.

Russia launched its military air campaign in Syria against terrorist groups on September 30 after Damascus officially requested its aid due to the critical situation in the country resulting from its civil war. Russia has conducted over 5,200 combat sorties since then.