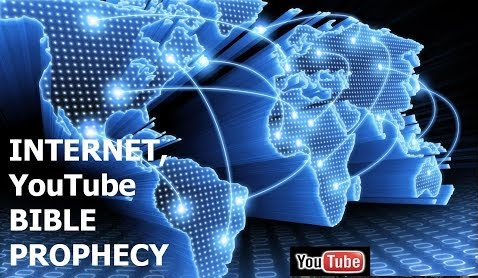 The Bible says knowledge shall increase at the end of the days.

But thou, O Daniel, shut up the words, and seal the book, even to the time of the end: many shall run to and fro, and knowledge shall be increased. (Daniel 12:4 King James Version)

Perhaps the greatest evidence for the rapid growth of information is the Internet and the cell phone.

Mankind, thanks to the Internet, is suffering from Information Overload.

WordPress, Firefox and Google support the “law of free supply and demand:” When the supply of bandwidth is virtually free, it creates ubiquitous demand.

Every translation of the Bible except The New Revised Standard Edition (NRSV) reflects the sentiment of “King James:” That God is worried about “too much knowledge.”

The NRSV edition, the only Bible translation that is widely ecumenical, is worried about “too much evil:”

But you, Daniel, keep the words secret and the book sealed until the time of the end. Many shall be running back and forth, and evil shall increase.

So according to God, if the book isn’t sealed up, a bunch of people will be running around increasing either “knowledge” or “evil.”

Keeping Knowledge from the Masses

What if the Internet is an ingenious and nefarious tactic to keep knowledge from the masses?

Did you know that the 1%ers have a responsibility to share knowledge with the masses?

The 1%ers believe that the “true knowledge” of the universe belongs to them (the Economic Elite of the World), but they are bound by the Rosicrucian Creed: “The elite have a responsibility to share the true knowledge with the masses.” [1]

The Internet is a way for the Economic Elite to satisfy the Rosicrucian Creed and still keep us in the dark.

You would have to agree that it is just about impossible to find any “true knowledge” in the avalanche and blizzard of useless, irrelevant nonsense on the web.

The “Rosicrucian Creed concept” can be found in the courtroom drama movie Class Action.

The movie and the lawsuit are about the defective circuit in a station wagon built by Argo Motors (the Ford Pinto). Jan Rubes plays Pavel, the absentminded test engineer who told the company the circuit would cause the car to explode (technically burst into flames), when it is hit from behind once the left turn signal is activated. The report of the faulty circuit and the decision not to recall the cars [because it was cheaper to deal with the lawsuits than fix the problem] is buried in “Iron Mountain.”

Maggie digs the report out of Iron Mountain and is now determined to help her father Jedediah (David) slay Goliath but is worried she will be disbarred.

Here are the scenes from the movie about how the Goliaths hide knowledge from the masses:

Scene 1:  Michael (Goliath Jr.) is trying to keep Maggie from telling her father about the faulty circuit.  My comments are in [].

Goliath Jr.: We have to lose it. [The report that warned Argo about the defective left turn signal that was buried at Iron Mountain]

Maggie: Haha, I am not going to be a party to destroying evidence [Knowledge].

Goliath Jr: Maggie, do you really want to jeopardize that?  We would be hurting ourselves and the client. That would be compounding the mistake. It’s over, we have to move on. Sometimes you have to learn the hard way… Maggie, oh Maggie, come on please, if you have any feelings for me, please think about this for while… come on.

Maggie: You didn’t give me this case to help my career. You wanted to cover your ass … you figure if this ever came up, who better to keep your little secret [actually a big secret] than someone you are sleeping with.

Maggie: I haven’t done anything wrong.

Goliath Jr: But you are about to break Rule #1, don’t fuck your friends [the 1%ers]. You do this and you are all alone.

Maggie: Well, I guess that’s a risk I have to take.

Goliath Jr: Look around you, Maggie. I am all you’ve got anywhere.

Cut to Scene 2 where the head of the 1%ers (Frederich) is discussing ways Goliath Jr. can keep the evidence of the faulty circuit [knowledge] from the masses.

Frederich: The way you see things is what has gotten us in this position.

Maggie: My father does want all the information on Pavel.

Goliath Jr: If we hand this over, we lose Argo and the case. [hand over knowledge]

Frederich: And if we don’t give full disclosure and we get caught, we lose the confidence of every other client we have. Michael, you are jeopardizing the biggest corporate client this firm has ever been involved with. We are down to the wire here. We cannot let this be even more of a disaster.

Goliath Jr: What do you want to do?

Frederich: How long did Pavel work for Argo?

Frederich: You have to figure an awful lot of paper [information] would build up over that time.

Goliath Jr: Right, so we bury it [bury it in the Internet]. We send them everything, every letter, every phone message, every scrap of paper, anything we can find. We’ll send them the goddamn Library of Congress [of useless information].

Maggie: But all they will have to do is pull the files from the year the research was done.

Maggie: You can’t do that.

Goliath Jr: We can inventory the documents anyway we want [all the Rosicrucian Creed says is that we have to share knowledge; it doesn’t say we have to make it easy for the masses to find it.] …  we can come up with some arcane structure … bury it [again. It was buried in Iron Mountain until Maggie found it, so they need to bury it again].

Frederich: Bottom line: It is within the letter of the law [we shared it, it isn’t our problem we came up with an arcane structure for sharing??]

Frederich: It had better Michael, it had better. Now both of you, this matter is quarantined. No one outside this room is to hear about it, understand?

Goliath Jr: (clears his throat) There is still the matter of Miss Ward.

Frederich: What does that mean?

Goliath Jr: (clears throat again) Well, uhh, I think it’s obvious there are serious questions regarding her loyalty to this case.

Frederich: I consider her an important and extremely loyal member of this team, Michael. Do you have a problem with that?

Cut Scene 3 where Goliath Jr. is loading the documents on a truck.

Michael: Let me see that please. That is page 22, 3rd from the bottom. I transposed the numbers and put it in project 2340 [hid the knowledge in project 2340].

Man loading the truck: Uhhh, the glamour of the law.

Michael: Maggie, you are just defending your client…

Maggie: What about the victims?

Michael: They should have had a better lawyer.

Cut to Scene 4 where the attorneys in David’s office are looking through the avalanche of information.

Attorney 2: People, let’s just keep digging … maybe we will find what we are looking for.

Jedediah: Hey, what’s going on here? Did we lose our lease?

Attorney 2: No, this is a Father’s Day gift, courtesy of Quinn Callafan and Lunt

Jedediah: Ahhh, don’t you get it?

Jedediah: We ask for one man’s file. She sends us a paper blizzard. She’s hiding something.

Google: “Do the Rosicrucians have a responsibility to share knowledge with the masses?” and you get the following result:

The Key to the Secret of the Universe, Part 2
www.thepeoplesvoice.org/…/the-key-to-the-secret-of-the-universe-pa…
Apr 30, 2010 – Rosicrucians believe that “true knowledge of the universe can only be … in turn have a responsibility to share this knowledge with the masses. …

Interesting … email me your thoughts about The Key to the Secret of the Universe, Part 2

Melanie Lamport is a retired Kindergarten and First Grade teacher living in Southern California. Ms. Lamport graduated from Indiana University with a B.S in Elementary Education.  She received her Master’s Degree in Curriculum Studies from DePaul University. mblaze2023@gmail.com

[1] Information about the Secret Societies is no longer classified as historical fiction. The Mysteries of the Freemasons documentary aired on the History Channel, April 17, 2010 at 9 A.M.

The beliefs of the Rosicrucian Order have been described as Gnostic, occult and cabalistic in nature. The Rosicrucian Fraternity believe that “the true knowledge of the universe can only be known by the Elite, who in turn have a responsibility to share this knowledge with the masses.” [A]

Think about how the Freemasons use the metaphors of operative stonemasons’ tools and implements, against the allegorical backdrop of the building of King Solomon’s Temple, to keep us busy deciphering useless irrelevant symbols and clues. Symbols and clues that in the end don’t lead to any real knowledge or wisdom. [B]

The Masons’ system of morality, veiled in allegory and illustrated by symbols is an ingenious way to “tell us what they are doing” without actually sharing any real knowledge with the masses.

The 1%ers, the Global Financial Elite (TGFE), the Economic Elite of the World (EEOW), The Powers That Be (TPTB) or whatever you want to call them, satisfy the Rosicrucian code of “ethics” when they make us listen to Lindsey and Alex bore us to death with:

The Masons’ system of morality, veiled in allegory and illustrated by symbols is an ingenious way the 1%ers, the Global Financial Elite (TGFE), the Economic Elite of the World (EEOW), The Powers That Be (TPTB), or whatever you want to call them, “tell us what they are doing” without actually sharing any real knowledge with the masses (“telling us what they are doing”).

[2] Corporatocracy, in social theories that focus on conflicts and opposing interests within society, denotes a system of government that serves the interest of, and may be run by, corporations and involves ties between government and business. Where corporations, conglomerates, and/or government entities with private components control the direction and governance of a country, including carrying out economic planning notwithstanding the ‘free market’ label.http://en.wikipedia.org/wiki/Corporatocracy

As of January 2012 clicking on the link returns:

The requested URL /newsarchive/2003/05spiritualization_imp.html was not found on this server. Additionally, a 404 Not Found error was encountered while trying to use an ErrorDocument to handle the request.

1776 was the birth of our nation and in one of those coincidences that don’t happen very often, 1776 is the same year the modern Illuminati was formed.

The Great Seal was designed by the Freemasons, who were given the job of creating the occult and Masonic symbols by the Illuminati (TPTB) to keep the masses busy until the time of the end.

Careful analysis of the seal and the so-called American Eagle discloses:

At the bottom of the text of the French Declaration (www.constitution.org/fr/fr_drm.htm), we read: “The above document was written by The Marquis de Lafayette, with help from his friend and neighbor, American envoy to France, Thomas Jefferson. Preamble. http://chnm.gmu.edu/revolution/chap3a.html

The Declaration contains many Masonic, Illuminist and alchemical symbols such as (starting from the top): the Eye of the Great Architect in glory, the Orobouros (snake eating its tail), the Phrygian cap (the red hat under the Ouroboros) and the fasces. Let’s not forget the two Masonic pillars on each side sustaining everything. Freemasonry and the Survival of the Eucharistic Brotherhoods by Mark Hoffman

In a documentary on Masonic monuments in Paris, Jacques Ravenne, a French author and high level Freemason said:

“The Declaration of Human Rights, which was created in France and gradually adopted around the world, was conceived, discussed and written in Masonic lodges before being released to the public. One can retrace those Masonic origins by the use of symbols, which bear little significance to the profane but are extremely important to the initiate.” http://www.erichufschmid.net/TFC/Rothschild-timeline-revised-excerpt.html