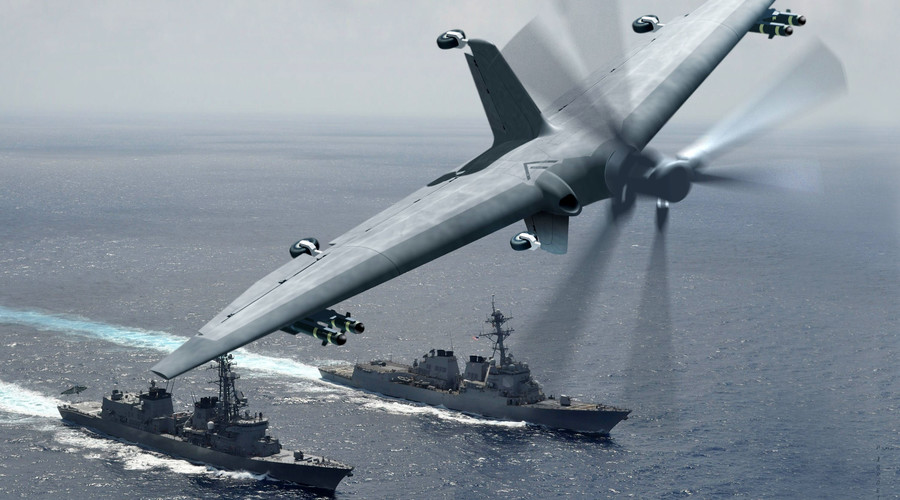 The US military’s advanced research agency has announced a project to build a prototype drone that can land on and take off a destroyer at sea. The drone is designed for intelligence, surveillance, and reconnaissance missions, as well as airstrikes.

The Defense Advanced Research Projects Agency (DARPA) announced on Tuesday it had awarded Northrop Grumman Corporation a $93 million contract to build a full-scale prototype drone for initial ground-based testing.
http://twitter.com/PopSci/status/681948064362422272/photo/1?ref_src=twsrc%5Etfw
The prototype drone, or unmanned air system (UAS), will be a tailsitting, flying-wind aircraft with twin counter-rotating, nose mounted propellers. The propellers would lift the aircraft from a ship deck, orient it for horizontal flight and provide propulsion to complete a mission. On return, the propellers would reorient the craft and lower it to the ship deck. It is designed to fit securely inside the ship when not in use.
http://twitter.com/RT_America/status/674083518264119300/photo/1?ref_src=twsrc%5Etfw
DARPA said if ground-based testing proves successful, it would lead to an at-sea demonstration of takeoff, transition to and from a horizontal flight, and landing on a test platform with a deck size similar to what’s seen on a destroyer.

The joint project, called Tactically Exploited Reconnaissance Node (TERN), is being helmed by DARPA and the Office of Naval Research (ONR) and is designed to combine land- and sea-based approaches to support airborne assets in 21st century warfare. The first two phases of the drone project, preliminary design and risk reduction, are complete, with phase 3 being the creation of a demonstrator model. The name TERN was coined after the long-distance migratory seabird.

The Navy has wished for an aircraft capable of vertical take-off since World War II, in order “to provide air support for fleets.” The first helicopters showed the Navy the potential value of such an asset. The TERN demonstrator resembles a fighter the Navy designed in the 1950s – the Convair XFY-1 Pogo.

That model had successful demonstrators but never got beyond the prototype stage because the Navy started focusing on faster jet aircraft, and realized pilots would need too much training to land the Pogo on moving ships in rough seas.