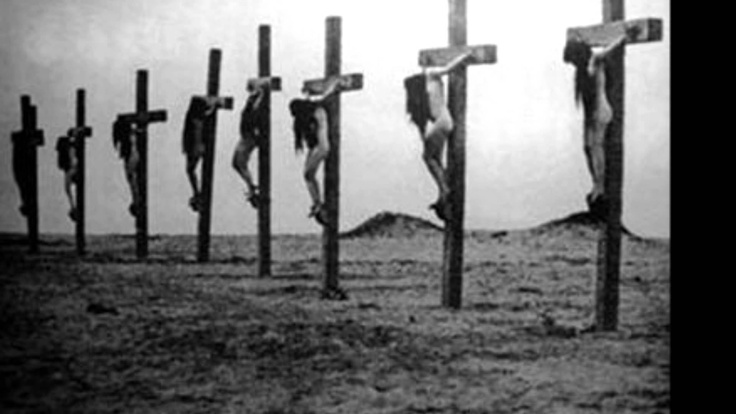 During the Armenian Genocide 16 girls were crucified alive in Malatia with spikes through their feet and hands.

The plans of the 1915-23 Armenian Genocide, where a million and half Armenians perished in a barbaric way in their ancestral lands in modern Turkey, actually were drawn up and were in place by the year 1910 or 1912.

There is the book “Inner Folds of the Ottoman Revolution” written by Mevlan Zadeh Rifat in Turkish and published in 1929, the author, a pro-sultan Turk, claims that the “Armenian genocide was decided between August, 1910 and October 1911, by a Young Turk committee composed entirely of displaced Balkan Jews in the form of a syncretist Jewish-Muslim sect which included Talaat, Enver, Behaeddin Shakir, Jemal, and Nizam posing as Muslims. It met in the Rothschild-funded Grand Orient Lodge/Hotel of Salonika.” Syncretism refers to a combination of different forms of belief or practice; freemasonry fits that description. As the masons started the 1789 revolution in France with the cry “Liberty, Fraternity, Equality,” Young Turks used the same slogan in their revolution of 1908.

A 1994 conference paper lecture by Joseph Brewda of Schiller Institute, entitled “Palmerson launches Young Turks to permanently control Middle East “, claims the founder of the Young Turks to be a certain Jew by the name of Emmanuel Carasso. He states: “Carasso set up the Young Turk secret society in the 1890s in Salonika, then part of Turkey, and now part of Greece.  Carasso was also the grand master of an Italian masonic lodge there, called ‘Macedonia Resurrected.’  The lodge was the headquarters of the Young Turks, and all the top Young Turk leadership were members.”

Further on Mr. Brewda says: “During the Young Turk regime, Carasso continued to play a leading role. He met with the sultan, to tell him that he was overthrown. He was in charge of putting the sultan under house arrest. He ran the Young Turk intelligence network in the Balkans. And he was in charge of all food supplies in the empire during World War I.” It is ironic that four centuries after the Turkish sultans welcomed the expelled European Jews into Turkey, certain Jews belonging to secret societies and to Zionism will kick the sultan out of power early in 20th century, destroy the Ottoman Empire, and celebrated their victory by massacring by proxy almost the whole Christian Armenian people, one million and half Armenians; half million Greeks; and half million Christian Assyrians & Arameans.

In 1982, after the Israeli army conquered Lebanon, they celebrated their victory by massacring by proxy children and women in the Palestinian camp of Shatila (aka the Sabra and Shatila massacre), in Lebanon, by allowing Lebanese Phalanger militia fighters to move into the camp for two days and murder its inhabitants. Eighty percent of the camp were killed. Nearly all of the dead were old men, women and children and all of them had been unarmed. Not one gun, not one knife was found in their possession, claims a Palestinian witness.

All of this according to the percepts of the Talmud, the Satanic Bible of the Jews, which encourages Jews to kill, directly or indirectly, by sayings like: “Every Jew who spills the blood of the godless, is doing the same as making a sacrifice to God.” (Talmud: Bammidber Raba c21 & Jalkut 772) In the eyes of Talmudists all non-Jews are godless. And “It is the law to kill anyone who denies the Torah. The Christians belong to the denying ones of the Torah.” (Talmud: Coschen Hamischpat, Hagah 425) Very neatly put sentence indeed.

Jesus came and shed his blood for us in order to save humanity and put an end to human and animal sacrifices practiced by Talmudist Jews who believe that the shedding of the blood of the innocents is a prerequisite of their reptilian gods, specially before embarking on an enterprise. They have orchestrated the massacres and slaughters of millions and millions of humanity so that their demonic gods will be appeased and grant them a new homeland in the Middle East. Apparently, the sacrifice of hundreds of millions of humanity during the first half of the twenty century (including those who died during the Nazi Holocaust) have appeased their gods and their wish was granted.

Back to the Young Turks. Mr. Brewda writes: “Another important area was the press. While in power, the Young Turks ran several newspapers, including ‘The Young Turk,’ whose editor was none other than the Russian Zionist leader Vladimir Jabotinsky. Jabotinsky had been educated as a young man in Italy.”

Mr. Brewda, ignoring the possibility that Talaat could have been a secret infiltrating Jew, writes: “Of course, there were also some Turks who helped lead the Young Turk movement. For example, Talaat Pasha. Talaat was the interior minister and dictator of the regime during World War I. He had been a member of Carasso’s Italian masonic lodge in Salonika. One year prior to the 1908 coup, Talaat became the grand master of the Scottish Rite Masons in the Ottoman Empire. If you go to the archives of Scottish Rite headquarters in Washington, D.C., you can find that most of the Young Turk leaders were officials in the Scottish Rite.”

By 1916 the British and French, overpowered by greed, already had a secret agreement to divide the Ottoman Empire between themselves. At that time Hitler’s “Mien Kamph ” anti-semitic book was a best-seller in Turkey; it was published by various Turkish publishers by the hundreds.  Did the Turks finally wake up and realize that their Sultan’s refusal to grant Palestine to the Zionist Jews as a homeland had cost them their centuries-old empire? And were the subjugated Turks about to discover who their real rulers are? There are claims that the blue-eyed founder of modern Turkey, Kemal Ataturk had Jewish origins. And it is known that at least two presidents of modern Turkey (İsmet İnönü and Celâl Bayar) were Jewish.

In Istanbul, which was the capital and the power center of the Ottoman Empire, there were only few thousand (less than 10,000) Jews and some 200,000 Armenians and Greeks who controlled the trade, finances and arts of the Empire. Jews and Christians were in stiff competition throughout hundreds of years of the life of the empire. Jews were the losers and Christians were the winners always because the Sultans (there were very few bad sultans who killed Christians) listened to and favored the Christians. For the Zionist Jews to take over Turkey, its Christians had to be eliminated; and that is another ugly facade of the first Genocide of the 20th Century, which took place in Turkey.

Another source is the lengthy article “The Armenian & Jewish Genocide Project: Eliminating Ethnic Conflict Along the Oil Route From Baku to the Suez Canal Region “ written by Clifford Shack and posted in his website.

Mr. Shack writes: “In the 1880’s, the French branch of the Rothschild family acquired interests in Russia’s Baku oil fields in an effort to supply their refinery on the Adriatic Sea with cheap Russian oil. In exchange for these interests they built a railroad linking Baku to the newly acquired Black Sea port of Batum. This opened up the Baku oil, a major world supply, to the world. With the success of the new railroad, the Rothschilds had more oil than they could actually sell. Overcoming their fear of competing with the giant Standard oil [of USA], they sought out the huge [Far East] markets east of Suez.”

Further on Mr. Shack makes his point: “The decision by the shrewd French Rothschild branch to diversify into other areas of oil exploitation was, presumably, a calculated one. Three years after they joined Royal Dutch, production at Baku would come to an abrupt halt in 1905. Although shaken by political activity, the principal disruption was due to the violence of the ethnic conflict between the region’s Muslims and the minority population of Armenians who are Christians. This ethnic conflict caused the first interruption of oil distribution to the world market. Standard Oil was quick to supplant the needs of the affected markets as its source was operating under the blanket of peace. The Royal/Dutch/Shell Group (and the nobles) watched their Baku investments go up in flames. Ethnic conflict was at the root of the matter. It could be safely assumed that they were taking measures to eliminate the possibility of that happening in the future.” Oil corporations seem to have learned their lessons from history because before the construction of present-day Baku-Ceyhan pipeline had began, someone has made sure that no Armenians were left in Baku anymore. Mr. Shack notes that “the mere elimination of the Armenian population of Baku would not solve the problem of ethnic conflict in that region. The surrounding areas would provide reservoir effect in resupplying the conflicting minority element.” And he asks: “was the removal [in 1915-23] of a small minority like the Armenians [from historical Armenia] a fair price to pay for the peace in a region so crucial to the development and investment of the Far East?” Apparently Mr. Shack ignores the factor of revenge raging in the heart of human beasts.

Mr. Shacks answers his own question by stating in his article about the big business or big corporations: “It would be fair to say that the genocide of a group of a million or so, to serve the benefit of a billion or so [in the Far East], is less of a question of should it be done, than how it could be done. So as not to reveal any plausible motive which could link the actual planners to the genocide, the scheme involved a proxy party [namely the Muslim Turks, Kurds & Azeris] , which was manipulated through layers of influence, providing sufficient cover for the planners.
*        *        *
In chapter 30 of the book of Isaiah we read God speaking by His prophet: “Woe to the rebellious children, who execute a plan, but not Mine, and make an alliance, but not of My Spirit, in order to add sin to sin;…For this is a rebellious people, false sons, sons who refuse to listen to the instruction of the Lord.”

This research article is not copyrighted. Reproduction is permitted. No one need waste time calling the author an ‘anti-semite.’ He will be the first to come to the help of a Jew if and when a Jewish life is in peril. Before you call him anti-semite your better call the God of the Bible and His prophets ‘anti-semites.’ If not, then you have to re-read the Bible…carefully.

The Turkish book “Inner Folds of the Ottoman Revolution” has no known English translation. It was translated into Armenian in 1939 in Beirut, Lebanon, by Donigian Press.