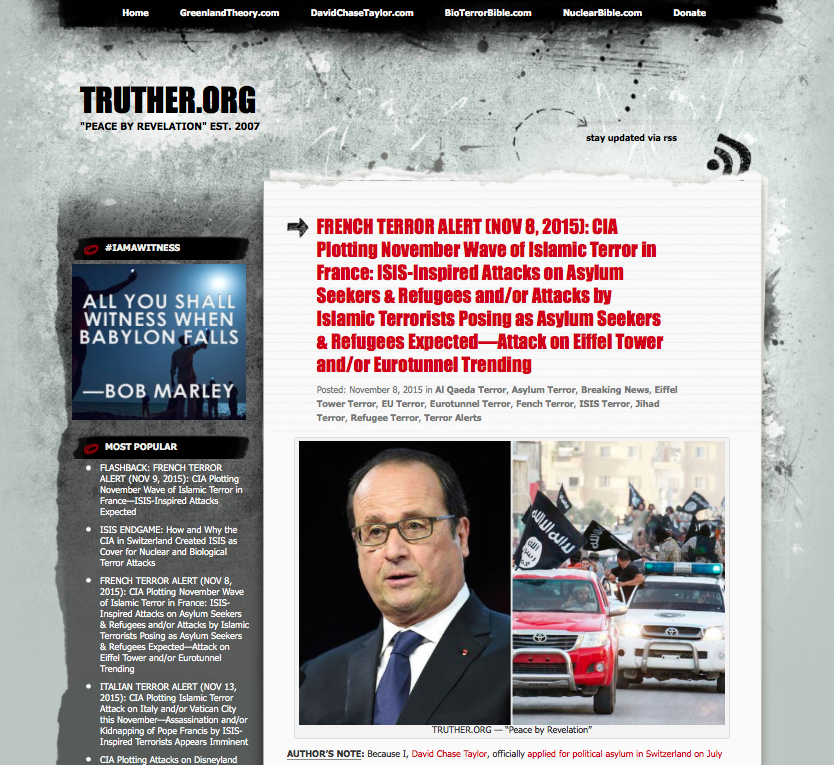 The screenshot above captured the concerned post from Truther.org dated November 8, 2015. Its profound significance cannot be exagggerated. This exceptionally prophetic news bulletin put the entire world on notice for what was to shortly transpire in Paris on Friday the 13th.

TMR Editor’s Note:
The following news alert dated November 8, 2015 and written by David Chase Taylor from Truther.org is quite extraordinary in view of the recent false flag terror attacks in Paris. In fact, the predictions contained in this “FRENCH TERROR ALERT” were made five days before the Friday the 13th terror wave.

What is particularly noteworthy about the post below is that the author has presented a literal catalogue of potential terrorist targets located throughout Paris.  While none of the exact locations was the actual site of Friday’s state-sponsored false flag operation, the prediction was left wide open and did include sites which could be construed as those warned about in the cyber-SOS shown below.

Perhaps these specific and general potential targets were listed as a means of warning the general public, as well as a way of telling the plotters to stay away from them.  Just like the predicted September Shemitah mayhem via stock market crashes and economic collapses was averted in the same fashion, Taylor is highly commended for identifying the most vulnerable and popular Parisian landmarks.

The bottom line here is that there are some extremely astute investigative journalists like David Taylor and others who now have a window into the clandestine methods and furtive techniques, hidden agendas and surreptitious plans of those who rule the realm.  A number of us are even marginalized and/or censored by some of the largest alternative news platforms on the Interent.  For this very reason it is critical for everyone concerned to seriously consider the following suggestion.

If you find this resonating,
Perhaps you’ll start disseminating!

AUTHOR’S NOTE: Because I, David Chase Taylor, officially applied for political asylum in Switzerland on July 17, 2015, the state-sponsored terror plots and so-called “natural disasters” I expose rarely come to fruition. In short, the Swiss CIA does not want to afford me any more credibility or publicity than they have to, lest they turn me into a modern-day prophet. They also do not want to provide yet another open-and-shut case as to why I deserve political asylum. For those wondering why I would apply for political asylum in Switzerland, know this: a) I originally applied for asylum in Switzerland on March 8, 2011, roughly 2-years before I discovered that Switzerland was harboring the CIA; and b) the CIA has historically not shat where it eats in Switzerland. That being said, the CIA has now been exposed for the first time in history. Consequently, they are extremely desperate and may assassinate me Switzerland.

ISIS ENDGAME: How & Why the CIA Created ISIS as Cover for Nuclear and Biological Terror Attacks

RED ALERT: 10 Reasons Why Switzerland is Home to the CIA

SWITZERLAND, Zurich — Based on breaking news and events, it appears that the CIA Headquarters beneath Lake Geneva is preparing to execute a wave of Islamic terror attacks in France. Said attacks will most likely be blamed on the state-sponsored terror group known as ISIS.

In what appears to be one of the slated French terror targets, it was reported back on October 19, 2015, that the Eurotunnel was shut down for 4-hours after hundreds of migrants stormed the terminal in France. Consequently, the tunnel and/or the asylum seekers and refugees may be targeted.

In what appears to be pre-French terror attack propaganda, it was reported back on March 23, 2015, that France now faces an “unprecedented” terror threat. Translation: the Swiss CIA is now preparing to execute a fresh wave of terror attacks in France.

Exactly what type of terror attacks are now in play for France is not known, but attacks on French airports, landmarks (e.g., Eiffel Tower), nuclear reactors, trains and schools are the most likely. That being said, it now appears that a 9/11-style attack by Malaysian Airlines Flight MH370 may be imminent.

As reported ad nauseam, the previously hijacked Flight MH370 which was disappeared by the CIA back on March 8, 2014, explicitly to execute a WMD-related attack and/or transport hundreds of ISIS terrorists from Iraq, Jordan and Syria to a western country such as France.

The notion that Flight MH370 is on its way to France was foreshadowed back on August 1, 2015, when it was reported that the washed-up wing flap of what was purported to be Flight MH370 arrived in France for investigators to study. Needless to say, the real Flight MH370 may arrive in France at a later date.

Two after Truther.org published a report on August 20, 2015, entitled “CIA Plotting Wave of Islamic Terror Attacks in France, Namely Paris”, it was revealed on August 22, 2015, that 2 American Special Forces subdued an Islamic gunman on a high-speed train in France.

The Islamic terror suspect was evidently the slated gunman in the Gaza Beach Protest Terror Plot and was followed and subsequently apprehended on the train once the respective plot was foiled. The notion that the men stopped an attack was a CIA publicity stunt designed to raise the specter of terrorists on French trains just prior to a staged attack.

In order to foreshadow Islamic terror in France, Russia Today published a report on August 23, 2015, entitled “Known Islamists Must be Expelled from France, Le Pen Says after Train Attack”. The timely comments by La Pen were designed to infer that Islamists are still in France just prior to another attack.

Roughly a month later on September 25, 2015, it was reported that a night guard was arrested in France after photocopying jihadist papers. Needless to say, the incident was fabricated by the CIA in order to foreshadow Islamic terror in France.

In order to provide a timely motive for ISIS-related terror attacks in France, it was reported on September 28, 2015, that France launched its first airstrikes against ISIS in Syria. Considering that CIA created ISIS as cover for nuclear and biological terror attacks, the airstrikes likely never transpired in reality.

Lastly, a day later on September 29, 2015, it was reported that a Nazi banner was unfurled in France for a World War III film. The publicity stunt was evidently designed to foreshadow the notion of Nazi-related terror in France just prior to a Neo-Nazi attack on asylum seeker and refugees.

Flight MH370 Attack
Based on breaking news and events, it appears that the CIA in Switzerland is plotting an attack via Malaysian Airlines Flight MH370 which was specifically hijacked by CIA on March 8, 2014, in order to execute a surprise WMD attack. According to a report dated July 29, 2015, debris found in the Indian Ocean is now being checked to see if it emanated from Flight MH370. The report was evidently designed to draw unprecedented media attention to the hijacked plane just prior to a 9/11-style attack and/or terrorist invasion. Although a USA Today report from August 2, 2015, stated that the debris found on Reunion Island was not from Flight 370, an August 5, 2015, report from Reuters broke the story that Malaysia Airlines has confirmed that airplane parts found on Reunion Island are in fact from Flight MH370. Whether this discovery will stand the test of time is not known, but it’s highly unlikely as it appears to be a hoax. Consequently, a 9/11-style attack and/or an ISIS-related terrorist invasion via Flight MH370 now appears imminent.

French Asylum Seeker/Refugee Terror Attack
Based on breaking news and events, it appears that CIA Headquarters beneath Lake Geneva is plotting a wave of terror in France, namely: a) ISIS-inspired and/or Neo-Nazi-related attacks on asylum seekers/refugees in France; and/or or b) terror attacks in France by Islamic terrorists posing as asylum seekers/refugees. Exactly what type of asylum seeker/refugee terror is in play for France is not known, but attacks on asylum seeker/refugee-related apartment buildings, buses, government offices immigration centers and tent camps are likely now in order. Regardless of who is ultimately blamed for the impending terror in France, the attacks will provide a timely motive for CIA minions within European governments to drastically alter EU asylum and immigration law, especially in respect to the Dublin Regulation which governs EU asylum law, namely in Switzerland. Considering that I, David Chase Taylor officially applied for political asylum in Switzerland on July 17, 2015 and have yet to receive a single appointment (a violation of the Dublin Regulation), it now appears that the refugee crisis in Europe is being orchestrated by the CIA in order to drastically change Swiss asylum law so that my case will never be heard.

Refugee Terror Trending
In what appears to be pre-refugee terror propaganda for Europe, it was reported on September 1, 2015, that ISIS terrorists were caught at a European border crossing posing as refugees. According to reports, 5 men posing as refugees attempted to cross the Bulgarian-Macedonian border with ISIS beheading propaganda on their cell phones. Coincidentally, less than a week prior on August 25, 2015, it was reported that 160 U.S. Marines arrived in Bulgaria for so-called regular training with NATO allies. Although only conjecture, it’s highly likely that the so-called 5 ISIS terrorists were in fact U.S. Marines posing as terrorists. Consequently, the remaining 155 U.S. Marines will likely be responsible for executing ISIS-inspired and/or Neo-Nazi attacks, most likely against asylum seeker and refugees. Said Marines may also travel via train to other parts of Europe in order to execute terror attacks, namely in Germany.

Refugee-Related Terror Imminent
Prior to a high-profile Islamic/refugee-related terror attack, the world must be psychologically prepared to accept that this is in fact possible. Fraudulent headlines and fabricated events are a slick way of convincing people that yes, it can happen. As evidenced headlines associating refugees with terrorism is now at an all-time high which suggests that a state-sponsored terror attack on refugees and/or a state-sponsored attack by refugees is imminent.

FLASHBACK: 2014 Cannes Film Festival Attack Foiled
Back on May 21, 2014, Truther.org issued a terror warning in respect to an impending attack on the 2014 Cannes Film Festival in Cannes, France. Less than 24-hours later, it was revealed that the missing British yacht which was evidently hijacked for the attack on Cannes was suddenly found. The timing of the report was curious considering that the search for the missing vessel was officially called off roughly 72-hours prior. Regardless, three days later on May 24, 2014, a total of 3 Special Forces were executed in Brussels, Belgium as part of the Terrorgate Scandal. Although a total of 4 commandos were targeted, one of them managed to escape. After a weeklong nationwide manhunt, French police finally arrested Mehdi Nemmouche (29), on June 1, 2014. Coincidentally, Nemmouche recently spent a year in Syria training, fitting the Cannes terrorist profile perfectly. In order hide the fact that this was in fact a mass execution, it was reported that the attack was “anti-Semitic” in nature and that two of the victims were female. Aside from Nemmouche, the names and photos of the other killed have not been released to date.

About the Author
David Chase Taylor is an American journalist and the editor-in-chief of Truther.org, a state-sponsored terror whistle-blower website. Taylor currently lives in Switzerland where he applied for political asylum on July 17, 2015. Taylor authored The Nuclear Bible, a book credited with foiling a nuclear terror attack upon Super Bowl XLV in Dallas, Texas on February 6, 2011, and Greenland Theory: Apocalypse Now, a book and website exposing the true power structure of the world, especially in respect to Greenland and its primary proxy state of Switzerland which is coincidentally home to the CIA. Taylor has also published The Bio-Terror Bible, a book and website exposing the global bio-terror pandemic planned for 2015. To date, Taylor has blown the whistle on over 100 state-sponsored terror plots, including the 2012 Democratic National Convention Terror Plot, the 2011 Super Bowl Nuclear Terror Plot, the 2014 Super Bowl Nuclear Terror Plot, the Terrorgate Scandal, the 2014 Memorial Day Massacre, the man-made asteroid attack planned for 2015, and the drone strike which killed “Fast and Furious” star Paul Walker. Taylor was also the first to expose Alex Jones’ treacherous links to STRATFOR and is noted for the 10 reasons why the Rosetta Comet landing was a hoax.