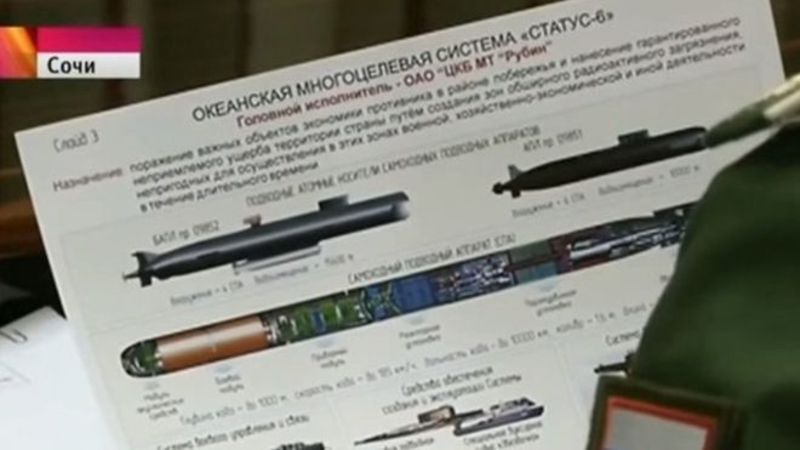 U.S. intelligence agencies concluded that Russia’s recent disclosure of a nuclear-armed underwater drone submarine was a deliberate leak, according to analysis of Russian video news reports and official Moscow statements.

The document shown during the broadcast revealed images of the drone submarine, including its nuclear warhead and nuclear power plant and two larger submarines used to transport it.

U.S. officials who analyzed the video said the timing of the Russian leader’s comments about missile defenses and the disclosure of the drone submarine strongly suggests that the leak was intentional.

Officials said that based on official statements from Moscow, the leaking of the nuclear drone submarine appeared to be part of nuclear saber-rattling and Russian information operations designed to dissuade the United States from deploying missile defenses in Europe that Russia opposes.

The document with the diagram of the drone was part of a folder being read by a general who was among a group of senior Russian military and national security officials attending the meeting in Sochi, Russia.

The general holding the folder was believed to be Col. Gen. Andrei Kartapolov, chief of the Russian general staff main operations directorate.

The document states in Russian that the remotely piloted submarine will travel at a depth of up to 3,280 feet at speeds of up to 56 knots and with a range of more than 6,200 miles.

U.S. intelligence believes the nuclear-powered drone will have a very large warhead of up to 10 megatons—or the equivalent of 10 million tons of TNT. The weapon would be used against harbors and coastal cities in a nuclear conflict.

The document said the weapon goal was to destroy “key economic assets in coastal areas and to cause guaranteed unacceptable damage to the country’s territory.”

Russia is currently engaged in a major strategic nuclear forces buildup that includes new missiles, new submarines, and a new bomber. Russia also has altered its nuclear doctrine; the Pentagon has said that it lowers the threshold for the use of nuclear weapons in a conflict, based on Moscow’s declining conventional forces.

In the Nov. 10 video, the document appears shortly after Putin is quoted saying the United States and NATO allies “are not suspending development of a global missile defense system.”

“Neither our concerns nor proposals for cooperation, unfortunately, have been taken into consideration,” Putin said. “We have repeatedly indicated that we regard such activities as an attempt to undermine the existing parity in nuclear missile armaments, and in essence to shake up the entire global and regional stability system.”

The voiceover during the NTV video at the time the drone submarine diagram is shown then stated that Putin had told his generals that Russian defense industries have created advanced combat weapons that are being supplied to the armed forces.

The leak set off widespread commentary in both U.S. and Russian military circles with some analysts suggesting the leak was traditional Russian disinformation—a combination of accurate and false information designed to mislead foreign intelligence services.

Other analysts said the disclosure could have been an error, although Russian government secrecy and operating procedures related to sensitive information make the idea the leak was accidental unlikely.

Mark Schneider, a former Pentagon official at the National Institute for Public Policy, said that he believes the leak was intentional.

“They did not have to do that,” he said. “It may well be this system is so far beyond the pale that they did not want a senior official to announce it but wanted the threat to be credible.”

Russia attacks U.S. missile defenses constantly, which suggests one possible motive. “Their understanding of the West is primitive and they are paranoid,” he added. “It could be a combination of motives. They want to be feared. They believe that something like this generates fear in the West and enhances their clout.”

Shortly after the drone document was revealed, Dmitri Peskov, a Russian presidential spokesman, announced that classified information had been inadvertently revealed public during Putin’s meeting. He said video images showing the document were later removed from the broadcast.

The fact that these news outlets—key tools in Russia’s information operations aimed at propagandizing western audiences—had not been ordered to stop showing the drone diagram is a sign of official sanctioning for the leak, the officials said.

Russia’s state-owned Channel One television broadcast a story on the drone submarine story, mentioning that it was being built in response to U.S. missile defenses. The story was later pulled.

By contrast, two private news outlets, Lenta.ru and the business newspaper Kommersant, reported on the drone but did not show images, likely fearing official sanctioning if they did so.

The fact that private outlets refrained from publishing the image even as state-run outlets continued to show the drone diagram also bolstered U.S. officials’ belief the leak was deliberate.

Russia under Putin has made opposition to U.S. missile defenses, particularly in Europe, the rationale for aggressive military activities, including a build up of nuclear and conventional forces.

Russia insists that European missile defenses are aimed primarily at Moscow’s forces despite U.S. denials that the defenses will be used to counter Russian offensive strategic missiles.

Maksim Shapovalenko, a Russian military analyst, told the Moscow Times that he regarded the leak as likely deliberate. “This is a gentle hint at the kind of asymmetric response Russia is prepared to execute should aggravation prevail over a reasonable tradeoff in its standoff with the West in general, and the U.S. in particular,” he said.

The Moscow newspaper also said the drone sub is a response to U.S. hypersonic cruise missiles in the Pentagon’s Prompt Global Strike program, which involves developing weapons that can hit any spot on earth within 30 minutes.

Another Russian military specialist, Konstantin Sivkov, a retired Russian navy captain, was quoted saying that the weapon is based on Soviet-era technology, specifically the nuclear-armed T-15 torpedo.

“Our authorities are actually aware that the United States is preparing to smash Russia militarily,” Sivkov told Riafan, a website based in St. Petersburg. “They are preparing to deliver a response that would imply assured destruction and would make such a scenario unacceptable to the United States.”

A report in the Svobodnaya Pressa on Nov. 11 suggested the Kanyon disclosure was disinformation.

Aleksander Khramchikhin, deputy director of the Political and Military Analysis Institute, was quoted saying that an accidental leak of top-secret information is impossible.

“The goal [of the leak] was to make a certain enemy to reconsider its actions,” he said. “Frankly, however, I doubt that the design in question will ever be built. That is, this leak is most probably pure disinformation.”

Blueprints for the drone sub were exposed to fight and baffle western nations, he said.