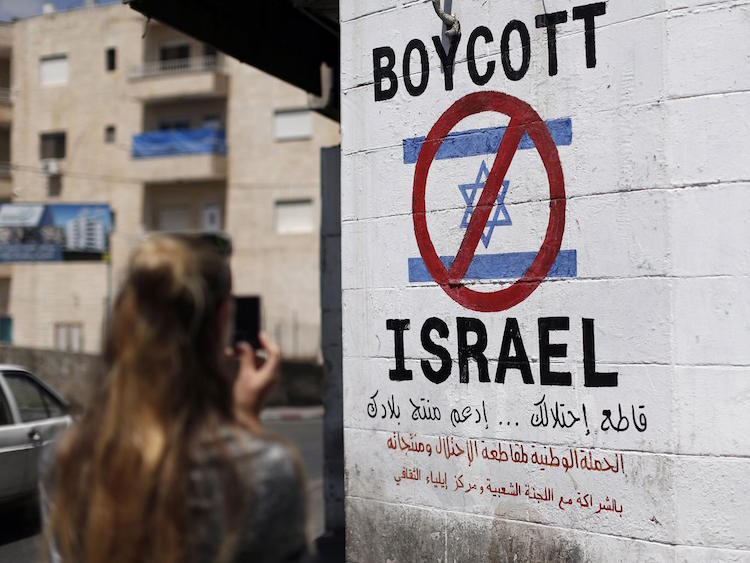 by Peter Walker and Ian Black

More than 300 academics from dozens of British universities have pledged to boycott Israeli academic institutions in protest at what they call intolerable human rights violations against the Palestinian people.

The declaration, by 343 professors and lecturers, is printed in a full-page advertisement carried in Tuesday’s Guardian, with the title: “A commitment by UK scholars to the rights of Palestinians.”

The pledge says the signatories, from a variety of universities in England and Wales, will not accept invitations to visit Israeli academic institutions, act as referees for them, or take part in events organised or funded by them. They will, however, still work with individual Israeli academics, it adds.

The advert says the signatories are “deeply disturbed by Israel’s illegal occupation of Palestinian land, the intolerable human rights violations that it inflicts on all sections of the Palestinian people, and its apparent determination to resist any feasible settlement”.

In a statement on behalf of the organisers of the boycott, Prof Jonathan Rosenhead, of the London School of Economics, said Israel’s universities were “at the heart of Israel’s violations of international law and oppression of the Palestinian people”.

He said: “These signatures were all collected despite the pressures that can be put on people not to criticise the state of Israel. Now that the invitation to join the commitment is in the public domain, we anticipate many more to join us.”

The initiative brought immediate criticism from the British and Israeli governments. The British ambassador to Israel, David Quarrey, said he was “deeply committed” to promoting academic and scientific ties. He added: “As David Cameron has said, the UK government will never allow those who want to boycott Israel to shut down 60 years worth of vibrant exchange and partnership that does so much to make both our countries stronger.”

The Israeli embassy in London published a scathing response to the ad, saying: “Boycott movements only aim to sow hatred and alienation between the sides, rather than promoting coexistence.

Letter: Cultural boycotts singling out Israel are divisive and discriminatory, and will not further peace
Read more

“The only path to advancing peace between Israelis and Palestinians passes through the negotiation room. Israel has called time and again for the renewal of talks immediately, without any preconditions. Those who call for a boycott against Israel during a month which saw 45 stabbing attacks – in which more than100 Israelis were wounded, and 10 were murdered – blatantly ignore the lives of Israelis, and the conditions necessary for peace.”

The advert was also condemned by Richard Verber, senior vice-president of the Board of Deputies of British Jews. He told Jewish News: “We would ask why these academics are singling out Israel in such a discriminatory fashion. At a time of immense, often barbaric, upheaval in other parts of the Middle East, Israel remains a beacon of academic excellence and progressive thinking.

“In the complex conflict between Israel and the Palestinians, boycotting either side will lead to zero progress. Their energy would be much better spent encouraging academic dialogue and relations between like-minded Israelis and Palestinians who believe in a brighter future.”

The advert comes less than a week after a group of writers, academics, MPs and others, among them JK Rowling, Simon Schama and Zoë Wanamaker, wrote to the Guardian to criticise the idea of such boycotts. The letter followed a pledge in February by hundreds of artists and musicians to instigate a cultural boycott of Israel due to the country’s “unrelenting attack on [Palestinian] land, their livelihood, their right to political existence”.

The counter-letter called boycotts singling out Israel “divisive and discriminatory”. It said: “We will be seeking to inform and encourage dialogue about Israel and the Palestinians in the wider cultural and creative community. While we may not all share the same views on the policies of the Israeli government, we all share a desire for peaceful coexistence.”