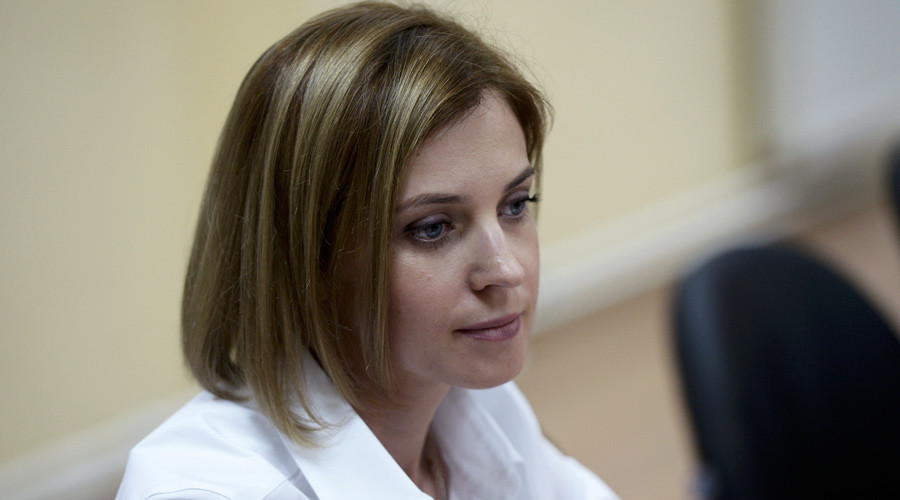 Crimean Prosecutor Natalya Poklonskaya says the so-called ‘food blockade’ of the peninsula launched by Ukrainian far-right movements is just a futile attempt to cause Russia additional discomfort in the interests of Western opponents.

“The so-called blockade does not conform to any norms of international law. But its instigators are not planning to build anything, they can only destroy and they need to further justify their existence. They act in the interests of Western nations based across the ocean, they act as puppets with strings in someone else’s hands when they try to even their scores with Crimea and harm Russia,” RIA Novosti quoted the famous Crimean lawyer as saying on Friday.

She added that the plans by Ukrainian radicals to disrupt food deliveries on the Crimean Peninsula had failed on every account. There is no threat of food shortages and Crimean residents haven’t complained of any discomfort, she noted, adding that law enforcers would not allow external forces to damage the regional economy.

“We will monitor prices on a daily basis. If someone intends to make more money through speculation it is not going to work. We will not allow anyone to profit from the current situation,” Poklonskaya said.

“Ukrainian radicals who allow themselves to rob, beat up and kill are the greatest threat to the citizens of their own country. They can use real force only against helpless Ukrainians because they are sure that this would not lead to any punishment,” she stated.

“All their threats to Crimea and Russia are only being voiced, and voiced from a safe distance because they still maintain some sense of self-preservation,” Poklonskaya added.

The comments came soon after activists of the Ukrainian nationalist groups, led by the notorious movement Right Sector began their ‘food blockade’ by obstructing any Crimea-bound traffic on highways and country roads. The Crimean Peninsula’s only land border is with Ukraine, but regular passenger and cargo deliveries are organized by ferries from ports in southern Russia.

In November last year, Russia recognized Right Sector as an extremist ultra-nationalist group, outlawing any of its activities and banning the public demonstration of its symbols.

Natalya Poklonskaya was appointed the head of the Crimean Prosecutor’s Office at the same time the agency was formed after the region’s accession into the Russian Federation. The video from the Poklonskaya’s very first news conference in office went viral on the internet, largely due to her stunning good looks, collecting millions of views.

In press interviews she said that Ukrainian law enforcers had threatened her with prison and death for accepting the post, but failed to make her fear them.

“I replied that I would rather be in a prison cell than work for fascists,” Poklonskaya told reporters in March this year.

READ MORE: ‘Rather be in prison than work for fascists’ – Crimean Prosecutor Poklonskaya