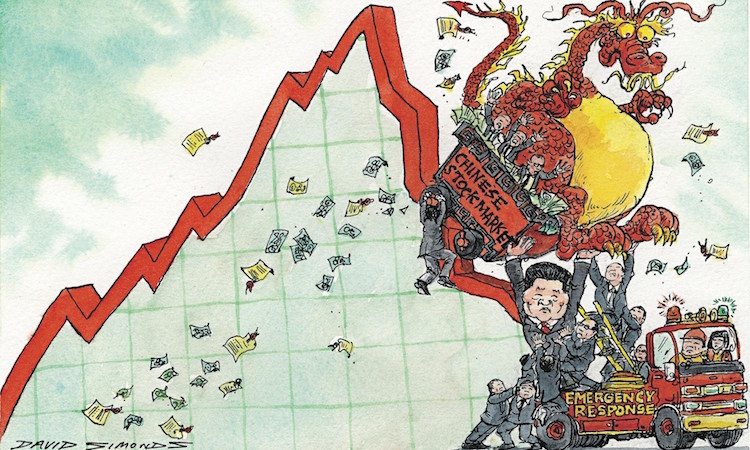 On the heels of a veritable bloodbath in Chinese equities overnight which saw the SHCOMP slide a harrowing 8.5%, the entire world is now beginning to take a hard look at the notion that dramatic bouts of selling pressure are aggravated and perhaps triggered by an unwind in the multiple backdoor margin lending channels that allowed investors to skirt official restrictions on leverage and helped to drive the market’s world-beating rally.

On Sunday night, before the carnage began, we outlined each of seven margin channels and presented an estimate (via BofAML) of just how big the ‘problem’ is. Here’s the table which shows that between official margin financing, stock collateralized lending, umbrella trusts, stock benefits swaps, structured mutual funds, P2P and offline private fund matchings, nearly CNY4 trillion in margin lending stands behind the Chinese market.

As you can see, official margin lending has fallen to CNY1.4 trillion after peaking above CNY2 trillion, but there’s still an exorbitant amount of leverage built into the system via the country’s shadow financing edifice. Below, you’ll find the complete breakdown of each channel, courtesy of BofAML.

This is the most transparent part of the leverage in the stock market with CSFC announcing the outstanding balance on a daily basis. The balance peaked on Jun 18th at Rmb2,267bn and has since declined to Rmb1,455bn by July 23rd (Chart 1 & 2).

MF is largely funded by banks via bank wealth management product (WMP) and brokers via their own funds and their Targeted Asset Management programs (TAM) – Exhibit 1. Although the government forbids banks to directly lend for stock purchase, it allows banks to do so indirectly via WMP because, in theory, banks do not bear losses if WMP loses money (more on this latter), and buyers of WMP are supposed to be reasonably sophisticated.

Holders of listed stocks can go to brokers, banks and trust companies to obtain a loan, using the stocks as collateral. Although in theory the borrowers can use the obtained funds for many purposes, we suspect that in recent times most of them used the funds to invest in the stock market, sometimes by buying the very stocks they used as collaterals to drive up their prices. It appears to us that potential margin calls from this lending source is one of the main reasons why, at the height of the A-share market crash, close to half of the A-share companies had their stocks suspended from trading

SMF commenced in in 2007. The structure of SMF is similar to UT with the senior tranche providing financing for a fixed return and the junior tranche taking on leverage to invest in the market. Buyers of both tranches tend to be retail. According to Fund Industry Association, 38 mutual fund management companies had set up 117 stock-focused SMFs by June 2015, with an outstanding AUM of Rmb473bn. These funds can invest in the mainboard, GEM board and ChiNext, depending on their mandate. CSRC caps the junior tranche’s leverage at 2x when the fund is initiated, and 6x during its operation. By June 22, the average leverage is at about 1.9x.

Note that we have discussed both umbrella trusts and structured funds extensively.

Here’s how we described the trusts: An umbrella trust is set up like a CDO. The senior tranche is sold by banks to clients who receive a fixed payout (like a coupon payment), only instead of CDS premiums (in the case of a synthetic structure) or cash flows (from a cash structure), the ‘coupon’ payments are generated by equity investments in the subordinated tranches, which are used by brokerages to skirt margin restrictions.In other words, the guys holding the senior tranches are financing the stock trades of the guys in the junior tranches. Here’s a schematic with a bit more detail:

And as for structured funds, recall that these are the vehicles which caused China’s young gun fund managers (the “E*trade babies” as we called them) to get into so much trouble, with losses in some funds totaling 80%. Here’s a concrete example from WSJ:

Retail investors and even some institutions like structured funds because they have earned outsize returns and it is an easy way to leverage their investments without having to borrow from securities firms or banks.

The funds are usually divided into two or more tranches.

With structured funds, the B-tranche is typically forced to sell stocks and lower leverage in a falling market, to protect the interest of the A-tranche fund investors. This has accelerated stock declines and exacerbated B-tranche losses.

The May 27 launch of the 246-million-yuan ($39.6-million) Peng Hua High Speed Railway Fund, the third-worst performer the past month among China’s 2,879 mutual funds, according to Howbuy.com, is especially ill-timed.

High-speed rail was a hot investment theme, but many of those stocks are now down 60% from their recent peaks.

The Peng Hua High Speed Railway Fund is managed by Jiao Wenlong. Mr. Jiao… He became a fund manager on May 5, the prospectus said.

And now back to BofAML for a rundown of the remaining backdoor margin lending channels, starting with the “SBS” (which is a lot like a total return swap) and continuing through P2P lending.

SBS is often referred to as institutions’ margin financing facility. The essence of the transaction is for brokers to buy stocks or stock indices in the secondary market (sometimes IPOs, placements, commodities or other financial instruments), using their own resources and then swap the floating return for a fixed return with an institution, such as a fund, a corporation, an insurer or a major shareholder in a listed company. To mitigate risks, brokers normally require the counterparties to put up margins and also sign a cut-loss agreement. Exhibit 3 illustrates how such a deal might work in practice for both lenders and borrowers.

During previous rounds of market rallies, fund matching service tended to be the key form of unofficial leverage. The service has been prevalent in Jiangsu and Zhejiang where there is significant private wealth. With the financial deregulation in recent years and the flourishing of many readily available forms of leverage as mentioned previously, the relative importance of private fund matching service has diminished a great deal. Nevertheless, the absolute size is probably still meaningful, particularly after the introduction of platforms like HOMS that has made risk control by lenders easier. Data here is murky. Some local experts estimate the scale at about Rmb200bn, including the online portion, which sounds about right to us. A fairly new phenomenon is the online fund matching service, mostly P2P . Local media reported that there are more than 60 P2P platforms specializing in fund matching for stock investing and many were set up in the past 6 months. The entry barrier is quite low: a website’s software and hardware cost is around Rmb0.5mn and regulation is light. These platforms mainly cater to small lenders and borrowers with loan size around Rmb2-30k per deal and duration ranging from 2-30 days. In contrast, the deal size for offline fund matching is typically over Rmb1mn.

So what does all of this mean for Chinese stocks?

First, it means that, as we saw on Monday and as we said rather prophetically on Sunday evening, “the important point is that the unwind has probably just begun. In short: it seems unlikely that all of the leverage has been squeezed out of China’s exceedingly intricate shadow financing system.”

Yes, “relentless selling pressure” as nearly CNY4 trillion in margin is unwound in a rather disorderly fashion.

And that spells trouble not only for China’s millions of newly-minted day traders who will be forced to watch in horror as their life savings’ are vaporized in a cascade of margin calls and forced unwinds that will ultimately trigger more days like Monday (and worse), but also for the broader economy, and also for the yuan. Here’s BofAML again:

This means that most leveraged positions may suffer from losses ultimately, likely in Rmb trillions. On the other hand, the capital base of brokers and trusts, who are the first loss takers behind investors, is only Rmb1.6tr (Table 2). Banks’ capital may suffer greatly as well once the equity of the other FIs is depleted – banks provide or channel most of the leverage directly or indirectly. The risk is that the unwinding of the leverage will be disorderly – due to implicit guarantees behind most shadow banking financial products, investors could easily panic if they suffer from meaningful capital losses, by our assessment. The key risk to our view is that the government may be prepared to take on substantially all the leverage, in which case, we expect RMB or growth to come under pressure.

In other words, the risk to the margin unwind case is that the PBoC steps up its support via CSF and essentially restores margin lending to its pre-selloff levels. The obvious problem there is that after the bevy of steps Beijing has taken to support the market over the course of the previous month, the world is already highly skeptical of China’s commitment to capital market liberalization. Any move by Beijing to go full-interventionist (or “full-Kuroda” as it were) may imperil not only China’s bid for A-share inclusion in benchmark EM indices, but the country’s yuan SDR bid as well.

Of course, as we’re fond of pointing out, if the country’s farmers, housewives, hairdressers, and grandmothers decide not to go silently into that good night, resigned to having lost everything in what is looking more and more like a modern day tulip mania every day, then a crashing economy and international ostracization of the renminbi may be the least of Beijing’s worries.