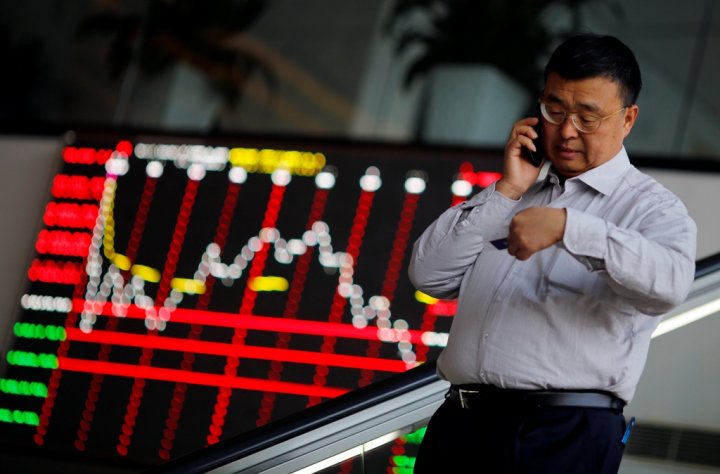 Shares in mainland China have recorded their biggest one-day fall for more than eight years following a sell-off towards the end of the trading day.

The Shanghai Composite closed down 8.5% at 3,725.56 after more weak economic data raised concerns about the health of world’s second largest economy.

Profit at China’s industrial firms dropped 0.3% in June from a year ago.

That followed data on Friday indicating that factory activity in July saw its worse performance for 15 months.

Bernard Aw, market strategist at trading firm IG, said the surprisingly weak manufacturing data “added to worries that there could be further weakness in the Chinese economy, after the patch of recent economic data showed signs of stability”.

The Shanghai market’s fall was the biggest one-day loss since February 2007.

It’s been a roller coaster ride for investors in Chinese shares.

First, the heady highs: a massive rally in a span of 12 months – stocks soared by some 150%. Then in late June of this year, a dramatic 30% fall which caused both traders and the government to panic.

Trading was suspended, companies cancelled their planned listings and the Chinese government was forced to step in to the market by getting brokerages to buy stocks – backed by central bank cash.

Many criticized these measures – saying they were illusory and a short term attempt to prop up the market, without fixing real economic problems.

And now analysts say it’s the lack of confidence in the government measures that has led to the fall in share prices this Monday.

It’s thought that rumours the government may soon be withdrawing these support measures also has some investors spooked.

Recent economic data has also been weaker than expected – and all of this is contributing to renewed fears about the outlook for the world’s second largest economy.

While there was little to explain why shares were being sold at such a level, analysts said fears that China might hold off from further measures to boost the economy had contributed to concerns among investors.

The stock market has been benefitting from a series of support measures from the government and regulators after it lost a third of its value in the three weeks from mid-June.

Chinese shares had recovered about 15% of their value before Monday’s plunge – showing some signs of stabilisation.

But on Monday, stocks fell across the board, including benchmark index heavyweights such as China Unicom, Bank of Communications and PetroChina.

More than 1,500 shares listed in Shanghai and Shenzhen fell by their daily downward limit of 10%.

When the Chinese market last fell this much in a day, I was working in fund management and glued to the screen watching.

My boss – who had spent most of his career in Asia was perplexed. “Why are you watching the equity market in a communist country?” he said.

Still some truth in that insight. Of course seven years ago, China was about 11% of global GDP by purchasing power parity. Now it is closer to 17%.

And Chinese retail investors are more numerous now, so there are more people with a stake to lose, but still only 50 million of them in a very big country.

My view now: worry about the Chinese economy slowing – that could really matter. Worry less about the stock market.