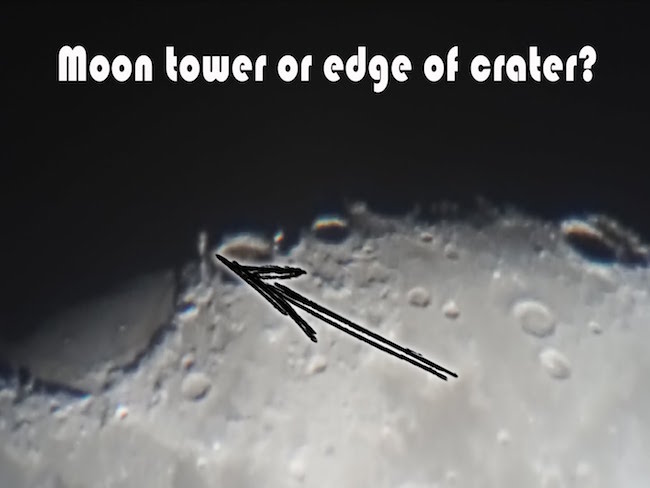 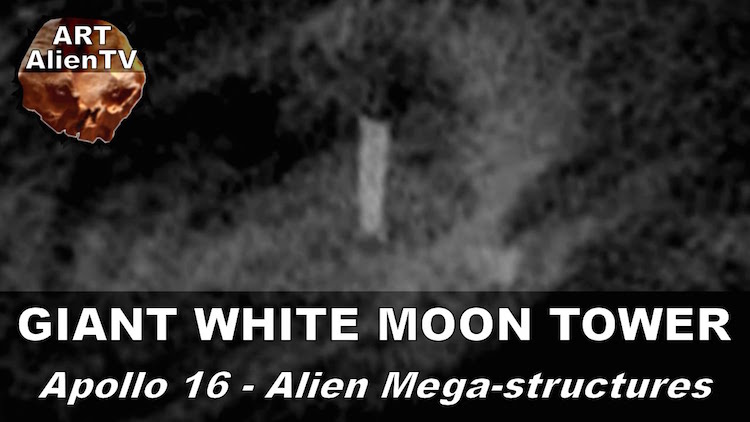 So this was why NASA terminated the Apollo Moon Program!

Obviously, NASA has both the spacecraft and space-based telescopic capability to get extreme closeups of the 5-mile high structure on the moon.

The questions then remains, since the Apollo Moon Mission of April of 1972, why has NASA failed to disclose this highly significant information to the taxpayers who funded the Apollo Space Program.

Notes from the YouTube video shown above as follows:

“A massive white tower structure perhaps 5 miles high on the Moon surface in this Apollo 16 image.  Also an octagonal lunar crater with a pyramid shaped structure well over a mile high sticking up.

Some other strange symmetrical possible building features and another smaller structure/feature that looks like a man, but can’t be.

The tower is bright white and much more luminescent than the surrounding terrain. It also seems to have smoke coming from it or something above it and a square structure to the right that shows better in the negative image.

It must be absolutely massive to show at this size from this distance.

NASA missed this one. Download the source image before they remove it”.

First found by ArtAlienTV (in this particular source image) on April 9th 2015 and first published on YouTube April 11th 2015.

English: The moon as seen from the depaturing Apollo 16.

Feel free to ask for any information regarding the objects/phenomena shown here.

The reason why some people think that the Apollo 11 moon landings were faked is that many of the images were doctored.

Radio transmissions were also switched to keep the Moon UFO’s that followed the Apollo missions to the surface, as well as the intelligent structures that were found there, a secret.

These UFO’s go some way to explain some of the strange lighting effects that people point out in many of the Apollo pictures. You can clearly see them in some of these NASA photos.

Some of the astronauts have recently testified on film about these UFO’s and structures.

The conspiracy that states that the Moon landings were faked was started by NASA according to Richard C Hoagland.

Memos were handed to the press in the early 1970’s to start the ball rolling.

The spawning of this huge homemade conspiracy was a total distraction.

Then for decades people were all arguing about whether they even went to he moon instead of keeping an eye on them. Clever.

So it was all a huge psyops gig to confuse and disrupt any potential trouble makers. Joe White – ArtAlienTV