Putin presented peace medal by the pope, more popular than ever 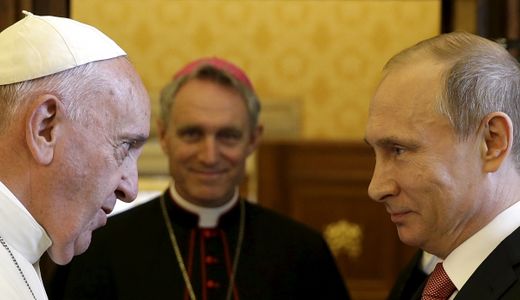 The polarization of opinions on Russian President Vladimir Putin couldn’t be more extreme. To the ‘official’ West, he is an authoritarian dictator, the next Hitler, a greedy power-mad ex-intelligence menace to all the values the Western world holds dear. To everyone else, he’s nothing of the sort. After all, what are Western ‘values’, really? As I wrote in my last article for SOTT (Where’s my cookie?! Anti-government protests in Ukraine ignored by US and EU), they’re pretty obvious: “crippling, suicidal debt, no economic or foreign policy to speak of, the torture and murder of civilians, brazen lies, insane rhetoric, and brutal psychopathy.” Freedom and democracy are meaningless words, or at least, their true meanings are totally opposite to what most people think.

By his words and his actions, Putin has shown that he not only sees through the democratic doublespeak; he’s also doing things in such a way as to avoid the worst aspects of Western freedom and democracy. You know, by supporting things like diplomacy over aggression, international law over unilateral invasions and blatant interference in the affairs of other nations, dialogue and cooperation over threats, demands, and subjugation. This is unacceptable to the rulers of the West, who amount to little more than an entrenched, hereditary, oligarchic ruling class that has thought it has the right to rule the world by virtue of the size of its military and the size of its checkbook.

So it’s understandable that anyone who hasn’t made a habit of imbibing the sweet sickness of the mainstream media, and the honeyed words of two-faced politicians in the West, sees Putin in a totally different light, putting their hopes in him to do what the whole world wants. For example, here’s what people on the streets of Italy expressed during Putin’s recent visit:

Putin met the Pope while in Italy. Here’s one description of what went down:

“Discussed the current situation in world affairs, of course, mentioned the crisis in Ukraine, spoke about the universal and humanitarian values, which largely unite the Catholic and Orthodox worlds, and all religions,” — said Peskov, also noting that both sides expressed concern about the situation with Christians in the Middle East.

“First of all, of course, those situations that pose a threat to the life of Christians in Syria, and continued conflict. Indeed, this is a very dire situation”, — quoted RIA Novosti the words of a Kremlin representative.

In total, the meeting lasted more than an hour. According to Peskov, “the conversation got really deep and thorough“.

After the meeting, Pope Francis gave Putin a medal with the image of an angel-peacemaker. Presenting a gift to the Russian President, the pontiff said: “This medal, which was created by the artist of the last century, depicts an angel who brings peace and justice, and solidarity, and protects. As well as this text, in which there is a reflection on the fact that the gospel brings us light and joy, and there are geopolitical thoughts about us and about our life”, — TASS quoted the words of the Pope.

In turn, Vladimir Putin presented Pope Francis with a canvas of the temple of Christ the Savior, as well as several volumes of the Orthodox Encyclopedia.

No, Daily Beast, the pope didn’t ‘diss’ Putin. What kind of mental gymnastics do you have to go through to come to that conclusion?! Then again, it’s the only conclusion possible when you’re blinded to your own arrogant, gutter-brained, faulty assumptions about Putin and Russia, about which you don’t know anything, really. Here’s how Barbi Latza Nadeau framed the encounter in that rag:

Putin and the pope spoke for 50 minutes during the private audience, and although there are no official minutes from the encounter, local press reported that Francis welcomed Putin with the word “wilkommen” which is German for welcome, and made the rest his public comments in German, raising eyebrows that perhaps Francis was making a not-so-subtle Merkel reference. (Or it might be nothing more than Francis using a shared language; Putin speaks fluent German from his days in the KGB in East Germany.)

Putin then presented the pope with a framed embroidery work sewn with gold thread. Francis gave Putin a medallion with the angel of peace on it, reminiscent of the same gift he gave to the Palestinian Authority leader Mahmoud Abbas last month. …

Father Federico Lombardi, the Vatican spokesman, said Francis asked Putin to put forward “a great effort to achieve peace” in Ukraine, implying that the two did indeed discuss the matter. “They agreed on the importance of rebuilding a climate of dialogue and that all parties commit themselves to implement the agreements of Minsk,” Lombardi said after the audience.

Check out the headline to Nadeau’s piece: “Did Pope Francis Just Diss Putin? Pope Francis greets the Russian president in German, prompting speculation that he stands with Germany and the U.S. in standing up to Russia.” Seriously? Talk about grasping at straws! At least Nadeau gave the more reasonable explanation in parentheses in her piece: they both know German! But no, the pope must be giving Putin some hidden message that he really sides with the warmongers. Lord, save us!

But note that Francis also gave such a medal to Abbas. Apparently he regularly gives out such medals to heads of state, but Abbas and Putin are significant. The gift of the medal basically calls on these leaders to be “messengers of peace” (‘angel’ actually means messenger). Francis apparently even told Abbas, “you are a bit an angel of peace,” after which he had to reassure the prickly, jealous three-year-olds ruling Israel that he meant them no offense. Remember, the Vatican just recently recognized Palestine, so that should give some idea of what Francis really thinks.

If anything, the conclusion to come to might be that Francis really does see Putin as a messenger of peace. It would make sense: he is! He’s the one behind the latest Minsk agreements; he’s the one calling for their complete and full implementation while Kiev refuses to abide by a single one of the stipulations and continues to illegally shell, torture and kill civilians in Donetsk and Lugansk. He’s the one who staved off an American invasion of Syria the first time ’round. He’s the one trying to bring a voice of reason to the world regarding Iran and the Middle East in general.

But all that is lost on most people in the West, apparently. But not in Russia. Putin is more popular than ever:

Vladimir Putin is supported by the vast majority of Russian citizens. Such data was provided by the Pew American research center.

According to the expert survey, the rating of the Russian President has reached 88%. This is the absolute maximum for the last 15 years.

The experts also shared other figures. The policy of the President of Russia towards Ukraine was supported by 83% of respondents, friendship with China – 90%, and Russia’s strategy towards the US – 85%.

And this coming from an American research center!

But Putin’s a tyrant, right? An authoritarian? Well, no. Sure, he is powerful. And sure, he is authoritative. But it might be wise to keep in mind these words from the historian Dio. It was written in regards to the Roman empire, but the relevance to today is clear enough:

Democracy, indeed, has a fair-appearing name and conveys the impression of bringing equal rights to all through equal laws, but its results are seen not to agree at all with its title. Monarchy, on the contrary, has an unpleasant sound, but is a most practical form of government to live under. For it is easier to find a single excellent man than many of them, and if even this seems to some a difficult feat, it is quite inevitable that the other alternative should be acknowledged to be impossible; for it does not belong to the majority of men to acquire virtue.

Russia saw what a ‘democracy’ of psychopaths can do to a country. We could learn a thing or two from them.