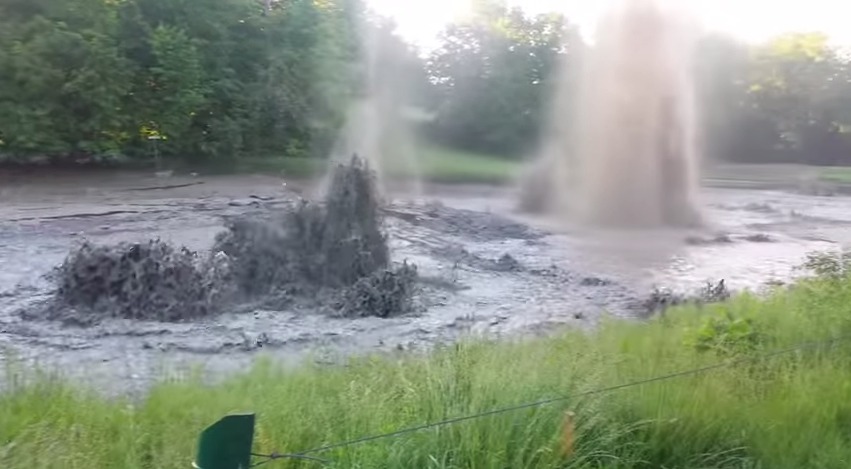 A large burst of naturally occurring methane has occurred in Lambton Shores, Ontario Canada, located about 80 miles Northeast of Detroit near the Michigan border along the shores of Lake Huron.

Appearing more like a violent geyser eruption at Yellowstone super-volcano, this large emission of methane caught locals off guard — as this is not ‘normal’ by any means.

Officials are saying this is a ‘natural’ burst of gas from the ground, and have issued a local state of emergency – warning people to keep away from the area.

Methane bursts are a worst case scenario according to professionals like the Arctic Methane Emergency Group (AMEG).

Scientists have warned we would start seeing these types of methane emissions in sub-tundra areas now that the Post Glacial Rebound Effect is taking hold in earnest.

“Indian Hills golf course staff have posted an update regarding the eruption of natural gas this week. Earlier this week the course was closed because naturally occurring gases had been observed being released from the ground in a localized area of the golf course. There continues to be no risk to the public outside of the site. The monitoring and testing will continue. The declared localized emergency remains in effect.

” Here is our understanding at this time. We cannot allow anyone on the golf course until we know that the situation is stable and no gas is leaking from the ground. We have all the required survey’s and tests lined up to take place today, tomorrow and over the weekend and into the start of next week. We hope to reopen by next weekend and should be able to have clear answers to exactly what happened.

“As of 10am on Friday things are looking almost normal which is allowing us to do further tests that will ensure the publics safety.
Thanks for everyones understanding of the situation.”

Lambton Shores Deputy Mayor Cook stated “The Municipality is continuing to work with the Kettle and Stony Point First Nation, as the owners of the golf course in conjunction with experts in this area.” Residents are being asked to stay away from the immediate area until advised that the situation has been resolved.

The public may call 2-1-1 for any updates on the situation.”

“Municipal officials in Lambton Shores declared a “localized state of emergency” Thursday, one day after a natural gas leak at a local golf course bubbled and released methane gas.

Doug Cook, the town’s deputy mayor, announced the state of emergency for the Indian Hills Golf Course and surrounding subdivision following a meeting of the Municipal Emergency Control group.

Gas has continued to leak into the air since Wednesday morning, and with no indication of when it might stop.

“We’re hoping it will dissipate in the near future,” Cook told The Observer. “There may be more radical steps to take if not, but at this point, there’s not much we can do.”

Firefighters and Lambton OPP responded to reports shortly before 8 a.m. Wednesday from a nearby First Nations group of a strange odour coming from a creek.

Cook said the evacuation was a precautionary measure and there is no risk to the public outside the gas leak site.

The cause of the leak is under investigation and is assumed to be naturally occurring gas venting to the surface. If that’s the case, it would be a rare incident since natural gas is usually found in pockets deep into the ground.

Natural gas, used as an energy source for heating, cooking, and power generation, is flammable when it mixes with air at certain concentrations.

Union Gas accompanied the firefighters to the site and determined the leak was indeed natural gas and contained methane, according to Andrea Stass, Union Gas’ manager of media relations. The utility company does not have any natural gas pipelines in the area, she added.

Representatives from the Ministry of the Environment and Ministry of Natural Resources are working in tandem to monitor the leak, but are not responsible for testing or determining the cause of the gas bubbles.

“Our focus is making sure the sampling work is done to determine the cause,” said environment ministry spokesperson Kate Jordan. “Once we have that or further information, that will really help us to determine what the appropriate next steps are.”

That responsibility falls to the Kettle and Stony Point First Nation who technically own the land. It also falls within the municipality. As such, the First Nation has hired a consultant to determine where the gas is coming from.

The environment ministry did a review of the area for any possible sources of methane, but found nothing, Jordan said.

The ministry also determined there is no possibility that the methane would present a health risk to people outside the immediate area, Jordan said. The municipality’s drinking water is safe.

“While signs may point to this being a naturally occurring gas leak, this has not been confirmed definitively,” Jordan said.

But Cook said with no possible sources of man-made pollutants releasing the methane, the consensus and “best opinion” is the gas leak is natural.

He added he had never heard of a naturally occurring gas leak before. Stass from Union Gas said she had heard of one other case in over 15 years working with the Chatham-based utility.

Lambton Shores, the First Nation and its consultant, as well as Ministry of the Environment officials are meeting again Friday. Until then, the state of emergency remains in effect and the public is advised to avoid the area.”