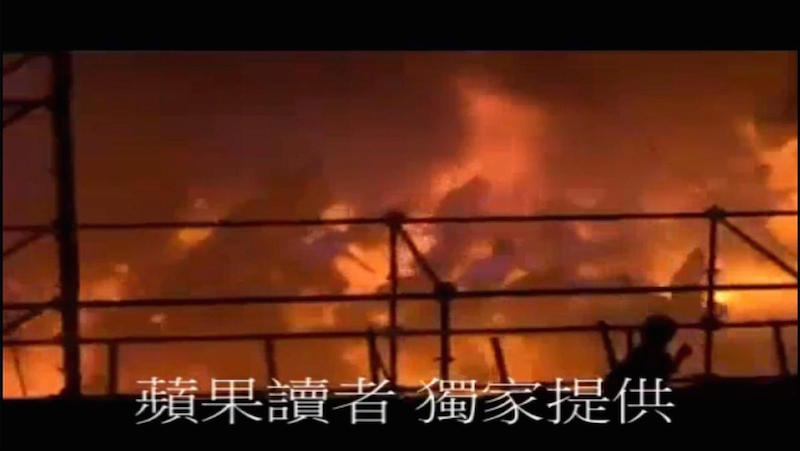 500+ gay pride youth engulfed in flames in Taiwan as Biblical-scale firestorm spontaneously ignites, raining down fire from above

(NaturalNews) A gay pride youth party in Taiwan went horribly wrong last night as a special effect consisting of huge clouds of rainbow-colored glitter particles was launched into the air over the partygoers. To the shock and horror of everyone, the metallic glitter ignited, raining down a firestorm of death upon hundreds of attendees who were engulfed in flames.

If you wish to donate to help support aid to the victims of this tragic event, here’s the donation page of the Tzu Chi Foundation, whose Chinese language page describes what they’re doing to help treat victims of this event, which they refer to as a “rainbow party.”

The lying leftist media is ashamed to admit this was a gay pride event! But as the following photos show, it was sponsored by an openly gay organization featuring a sperm logo and gay men associated with an international gay modeling organization. I’m not blaming gays for this horrible tragedy, but let’s not be ridiculous and try to claim this gay pride rainbow party wasn’t a gay pride rainbow party. It clearly was. I thought now that gay marriage was out in the open and made universal by the Supreme Court, we didn’t have to hide talking about all this anymore. Apparently, I underestimated the degree to which people still want to keep all this in the closet when it comes to gay pride public events. Somehow, it’s still wrong to refer to gay pride events as gay pride events…

(Natural News is not an anti-gay publisher, by the way. We’ve long argued for universal freedom to love and live with whomever you want and concepts like universal tolerance for diversity. We are a “pro choice on almost everything” publisher with a social libertarian view, arguing that marriage shouldn’t be “licensed” by the government in the first place.)

BACK INTO THE CLOSET! U.S. media too ashamed to admit this was a gay pride event

While the U.S. mainstream media is too ashamed to admit this event was a gay pride celebration, Asian media outlets have no problem pointing out the obvious. As this news link from Malaysia reports, “The U.S. government has just recognized gay marriage, and this allows gay people all around the world to see the coming promise, leading the large-scale celebrations. New Taipei City in Taiwan, Ba-Xian Water Park hosted a ‘rainbow party’ this past Saturday. Unfortunately, there was a tragic event of a massive explosion, causing many people to be burned. It is currently estimated that at least 458 people are injured, and some of them have critical injuries.”

UPDATE: Trolls and haters on social media are hilariously taking issue with the phrases “burned alive” and “Biblical-scale” used in the title of this story. The contrived outrage is absurd but also highly reflective of the very same kind of mob mentality we see ruling society these days. “Burned alive” means being burned while you are alive, which is precisely what this video shows and exactly what happened. People were alive and being burned while running for safety. They were not burned DEAD, they were burned ALIVE as they tried to escape. If I wanted to report they were burned DEAD, I would have used the phrase, “Burned to DEATH.” However, in order to avoid people misinterpreting the words, I have updated the title to change “burned alive” to “engulfed in flames.” Hopefully, people will be able to understand what “engulfed in flames” means, or else I may have to turn this website into a dictionary. Secondly, the phrase “Biblical-scale” means “really, really big” which is precisely what we see in this video. Apparently, haters can’t even stand the sight of the word “Biblical” when it’s used as part of an adjective for a very large catastrophe in which innocent people were harmed. “Biblical-scale” is an adjective of size, nothing more. Case closed.

The Natural News Taiwan office has given us exclusive information concerning this event which is not being reported elsewhere in the western media:

• Over 600 500 people (corrected to 500 with new information) were injured in the firestorm, not the 200 or so being mentioned in the media. Local hospitals are completely overrun with burn victims, and some victims with less severe burns were turned away from hospitals.

• There is no common knowledge among Taiwan citizens — who are almost all urban city dwellers — that dispersed metallic particles can easily ignite in the air. Although this knowledge is very common in the Midwest of the USA, for example, where grain elevators must be on constant alert to prevent grain explosions, nobody in Taiwan seemed to have any knowledge that this could happen. That clouds of metallic glitter particles could spontaneously ignite was a complete surprise to most Taiwanese, even after the event took place.

• The event was planned as a celebration of gay marriage legalization around the world. It was not heavily promoted as a “gay pride” event because being openly gay is not widely accepted in Taiwan society (which is still culturally quite conservative as far as family values go). Instead, the event was promoted using the key word “rainbow,” the universal global symbol associated with gay pride.

• The very glitter that ignited and rained fire down upon the hundreds of youth attending the gay pride party was colored with the same hues as the rainbow. FACT: Many color pigment chemicals are made using metals which can ignite when dispersed into tiny particles and subjected to an ignition source. Magnesium shavings, for example, are a common ingredient in fire starting devices used by preppers. Personally, I find it astonishing that there are people in this world who still don’t know metals can ignite and burn.

• UPDATE: Personal lighters were found at the scene, and Taiwanese investigators now believe these lighters were the source of ignition.

• UPDATE: Not every person at the event was gay, of course. The event was promoted as a “color play / rainbow” event, which is universally associated with gay pride. Natural News is being told that some people attending the event were not aware of the connection between “rainbow” and “gay,” although most youth in today’s connected society are completely aware of this universal symbolism.

Video shows fire raining down upon hundreds of partygoers

Here’s a look at the rainbow banners promoting the event. The “gay pride” aspect of the event is not overtly pushed due to the more conservative family culture of Taiwan: Here’s a still image from the rainbow event promotional video, showing the rainbow colors in the logo, and the “sperm” logo of one of the event sponsors (see the sperm logo on the far left): The concert saw hundreds of youth celebrating gay pride with music and dancing: Rainbow-colored special effects were launched into and above the crowd, to “shower the partygoers” in the colors of the gay pride rainbow: Due to the laws of physics, the dispersal of the colored glitter material (full of flammable metals) combined with oxygen in the air and a small ignition source (probably someone’s cigarette lighter) to ignite the rainbow glitter into a massive fireball: The fire rapidly exploded almost like a fuel-air bomb, engulfing the entire scene: Hundreds of students were engulfed in flames as they desperately tried to escape the raining down of fire upon their heads. Their clothing ignited, and many partygoers experienced third-degree burns over 80 percent of their bodies. You can see the silhouette shapes of the students in this frame as they are being burned while still alive, desperately trying to scramble away from the engulfing flames: As the fire engulfed the partygoers, many fell to the ground where they burned until the flames had no more fuel. It’s abundantly clear that the Taiwan gay pride “rainbow” event was sponsored by gay advocacy organizations. This link, of course, is being vehemently denied in the mainstream media, which does not want to link gay pride events to a catastrophe that harmed hundreds of people. I’m still not sure why there’s such a desperate effort to try to deny that this was a gay pride event when it clearly was.

The facts are undeniable and irrefutable. Of course the event was a “gay pride” event. It was sponsored with the logo of a sperm, from a gay male apparel company.

A closer look at the sperm logo reveals it to be a corporate sponsor called New Urban Male which features gay models promoting clothing fashions:

New Urban Male Taiwan, a key corporate sponsor of the event, features a Facebook page with a rainbow teddy bear and a “Love Wins” balloon, along with gay men in a headlock, wearing fashionable underwear. The “love wins” hashtag is what’s being widely circulated in the aftermath of the U.S. Supreme Court decision to legalize gay marriage nationwide. Other images from the Gay Urban Male website feature this gay propaganda underwear: …and this poster proudly proclaiming how New Urban Male is the “official apparel for Manhunt International, 2012.” Manhunt International is an international gay modeling contest, as shown in this picture from their website: Our prayers go out to all those harmed in this disaster

Here at Natural News, we pray for those youth who took part in this event and were injured by the hellstorm of fire that rained down upon them. We hope they will heal and recover as quickly as possible, and we are publishing this story in the hope that the international community will come to the aid of these victimized youth.

More importantly, I also hope that Taiwan will recognize the need for far greater public safety regulations regarding staged events. For decades, Taiwan has lagged on commonsense public safety regulations that could have saved lives. I remember that even when I lived in Taiwan, there were regular reports of school busses burning children alive because they couldn’t find the exit, or entire restaurants full of people being killed in tragic fires because the exits were blocked.

What Taiwan keeps learning over and over again, unfortunately, is that safety standards matter. And you probably shouldn’t fill the air with tiny particles of magnesium and other combustible substances when there are ignition sources nearby.

It’s a sad day when anybody — gay, straight or otherwise — is horribly burned in such an ill-planned event, especially when the tragedy that took place should have been readily preventable.

My heart goes out to all the victims of this horrible tragedy in Taiwan, and I can only hope that Taiwan’s public safety regulators will now assert sufficient public safety guidelines to prevent such a catastrophe from happening again.